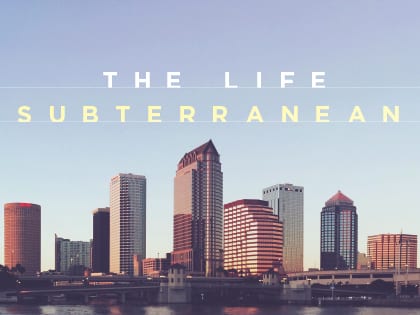 “If you want people to live in a different way, you have to promise them change—the possibility of a different kind of church.”

Who: Tampa Underground
What: A nonprofit network of relationship and resources, or a fellowship of “microchurches” organized around mission and local ministry.
Where: 136 microchurch locations in Tampa, Florida, with sister movements in 10 cities and six countries.
When: 2007-present
How + Why: Read on …

Almost 10 years earlier—1996—the young man and his family had moved into the poorest urban neighborhood of his hometown—Tampa, Florida—to start an intentional community. Brian works for InterVarsity, seeing the diverse student ministry for what it is—missionary work.

And maybe that’s part of the problem. As he sits one Sunday in 2005 in the sanctuary of his home church, listening to the line items for a crushing (cosmetic) building renovation budget, his frustration with church is about to boil. All this platformed world of expensive programs and buildings feels so far from the rough realities of a decade of urban life and student ministry. Brian feels ignored, on the margins of a church that should be encouraging and equipping Christians like him. But he feels unseen.

Brian’s not alone, either. Students he works with—young people who love Jesus—are growing jaded toward traditional churches, citing disconnection, excess. They flounder. Some leave church altogether. And he’s begun to feel it, too: a growing frustration with how disconnected “church” feels from his calling in God’s Kingdom.

Another announcement drones up front—that the church needs to buy pretty blue chairs instead of those ugly orange chairs for temporary use while the renovations are being completed. It will be expensive. … And that little thing does it. Something snaps in Brian. This is not the church life he wants.

Brian doesn’t care if he sits in ugly orange chairs. He wants to live the gospel.

Is the church I read about in the New Testament a myth? He wonders.

Or could it be real?

Fast forward a few months. Brian and his intentional community sit talking. They begin to list people they know who aren’t going to church but still love Jesus. By the time they’re done, they have 50 names.

There’s one of three things happening to these people as time goes on. Either they give up their early “radical” Christian values picked up while working with Brian, acquiescing to what might be called a consumer-church lifestyle, or they abandon church altogether, or, like Brian, they keep going but hate it, bittering toward the very thing intended to bring them life. Brian felt responsible for those 50, many of whom had a sense of call to radical ministry as InterVarsity students.

Now, more than 10 years later, Brian’s telling me this story over the phone. “Bro, it ate at us,” he recalls, his tone still half student minister. “But at some point, we woke up. We realized, ‘We’re disciples of Jesus. He can lead us. We are an expression of his church, and can live that out—however imperfectly. And at least,’ we thought, ‘if we make mistakes, the mistakes can be ours.’”

The orange-chair crisis of conscience was becoming a crisis of practice. And instead of stewing to death, Brian and his community decided to do something about those 50 names. So, he spoke to each one on the list: “I don’t know what we should do,” he said, “or what it will look like. But we need to do something—and I think we should do it together.”

Instead of inheriting a system, maybe they could make one that reflected their values—that looked like them, that put the kingdom work of mission at the center of community and ministry.

Would they like to join them in that process? Brian asked each of those 50.

Every one said yes.

The group began to meet every two weeks to talk about church. Not just the abstracts, either—the concrete realities of community, like money, governance, discipleship. They wrote down everything, and commissioned the core team to propose a path forward. They began to pray and wait.

They didn’t know it then, but before long, 40 of them would be together in a slum of Manila, Philippines. And their dream of church would begin to feel possible.

Sanders is friendly on the phone, but seems shy about telling Tampa Underground’s story. He says that I’m calling at a good time though—if Outreach had asked anytime in the previous 10 years he would have politely declined a story focused on their work. “The results weren’t in yet,” he says, chuckling. “This has felt like an experiment. We’re just at the point where we can say it’s working.”

“Yeah. At the beginning, we all wondered where we could learn what we needed, how we could open our minds to see what was possible.” Even though the American church assumes it’s the best at everything, Sanders says, the truth is that the church is strongest in the global south, and the team decided they didn’t need to try to brazenly pioneer something “new.” Instead, they needed overseas mentors.

They decided on Manila. Their core team of nine adults and 10 children could live in the very poor metro slums on three American salaries. Getting permission for a missionary sabbatical from InterVarsity and their support teams, they went. The rest of the group quit jobs or took leaves of absence. In the fall of 2006, they went.