Home Features ‘Lord, I Thank Thee That I Am Not Like Those Evangelical Trump... 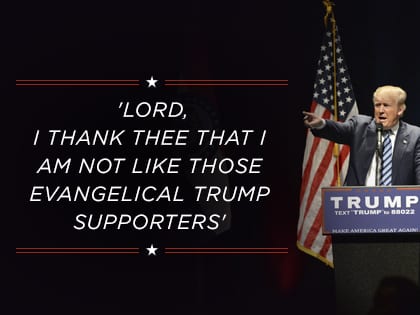 Ed Stetzer: “Our gut reaction is to dismiss Trump supporters and to question their faith. I’d like to suggest a different approach.”

In the 18th chapter of Luke’s Gospel, Jesus tells a story about two men who go up to the temple to pray.

One is a Pharisee, known for his strict piety: he fasts twice a week, tithes faithfully and doesn’t cheat on his wife.

The other, a tax collector, is a train wreck who has sold out his people by collaborating with their Roman overlords. He’s the worst person in their world.

“God,” the Pharisee prays, “I thank you that I’m not like other people—greedy, unrighteous, adulterers, even like this tax collector.”

This parable came to mind recently, inspired in part by some of the response to the surprising popularity of Donald Trump among evangelical Christians.

In recent decades, white evangelicals—and yes, that’s a statistically identifiable voting bloc and I’m using it as such in this article—have been among the most consistent supporters of the Republican Party. Most of the time, they’ve been so-called “values voters” who demanded that their leaders be people of faith, committed to traditional moral principles, and the kind of politicians who stand up for the 10 Commandments.

Yet evangelicals turned out in droves to vote for Trump, who has certainly broken a few of those commandments. As Trump became the presumptive Republican nominee, news broke that hundreds of evangelical leaders planned to meet with him—a sign that many of those leaders may ultimately support Trump.

This support has grown despite Trump’s personal lifestyle choices and unclear views on social issues, which are normally of great concern to evangelicals.

Candidate Trump admits never asking for forgiveness, doesn’t repent when he goes astray, and refers to communion bread as “my little cracker” as Rachel Zoll of the Associated Press points out.

Yet many evangelicals love him.

This embrace of Trump caused some Christian leaders to react variously with disbelief, astonishment, despair and, often, complete dismissal.

When the Trump train started gaining steam, some tried to say that evangelicals were really not voting for Trump. But numbers and facts are pesky things, and the data told us something different.

Even before the other candidates left the race, Trump was the most frequent choice of all evangelicals, including frequent attendees. Although the levels of support changed according to frequency of attendance, he was still the most frequently chosen in every breakdown in most states.

Yet, among evangelical “insiders,” a tiny group supported Trump. It was a few more when looking at pastors. And Trump was the most common choice among rank-and-file (including regularly attending) evangelicals.

When religious leaders hold one view (strongly), and the grassroots hold another, it’s a recipe for religious scorn.

Donald Trump will be the Republican candidate for president. Many white evangelicals, who traditionally vote Republican, are asking what to do next. The debate is raging; it’s an important discussion.

I get the concerns. Trump has made offensive comments, holds positions with which I deeply differ, and is like no candidate we’ve seen in recent history.

Furthermore, I hold different views on many issues from many Trump supporters. I’ve hosted refugee ministry summits, am a signer of the Evangelical Immigration Table, hosted conversations on racial justice, and have spoken up for religious liberty for Muslims.

If Trump were elected president, I’d be concerned about many of these issues.

Yet, I am also worried that—whether he is elected president or not—the reaction to Trump’s campaign may harm the evangelical wing of the Church.

Many evangelical leaders are embarrassed by the evangelical support of Trump. That’s reality. Yet, some of those leaders are responding poorly. Our gut reaction is to dismiss his supporters as not being “real” evangelicals, and to question their faith.

Rather than looking down with scorn on evangelical Trump supporters, perhaps we should sit down with them, listen to them and hear their concerns.

I don’t know them all, but I know some—including some members of my church.

The ones I do know don’t hate immigrants (though they think illegal immigration is an economic and criminal problem), think a multicultural society is a good thing (while they are quite tired of politically correct speech codes), and they really do want what’s best for the country (though we might differ on what that is).

I may not agree with that decision, but I do care about them. In part, because for some Trump supporters, I am their pastor.

Perhaps being a pastor helps here. People tell me what they really think—in part because my job is to listen to them and love them.

Here are the concerns I hear from some people in my church—including one Trump campaign staffer—which mirror the more commonly expressed concerns:

From Outreach Magazine  5 Grave Dangers for the Local Church

First, they feel like the political system is broken and needs an outsider to fix it.

Second, they’re unsure and insecure about the future—they know that good jobs in this economy are few and far between, and see illegal immigration as part of the reason.

Third, they think Christians are being pushed out of society and are looking for someone who will make it stop.

Fourth, they think this administration has been embarrassingly weak on the global threat of radical Islam.

I do not agree with all the concerns of all Trump supporters and believe some of them to be based on factually questionable information. Furthermore, the people with whom I’ve interacted do not make a representative sample—and I’ve seen some much more troubling comments from Trump supporters around the country.

However, I’ve listened to people I know and learned their concerns. I actually agree with some of their concerns and have tried to listen even when I disagree. Because of that, perhaps, they’re willing to listen to my views as well.

This is what a healthy church family does when we disagree. We sit down and talk things out—even when they are painful and difficult, and even when we may not in the end come to a consensus.

There are Christians who are independents, Democrats, mainstream Republicans and, yes, Trump Republicans. They are part of our family of faith.

We can talk. We can debate. We can vote. We can engage.

Don’t go the way of the Pharisee in Luke 18.

We can have a different view—and state that view. But, what we can’t do is pray, “Dear Lord, I thank thee that I am not like those Evangelical Trump supporters.”