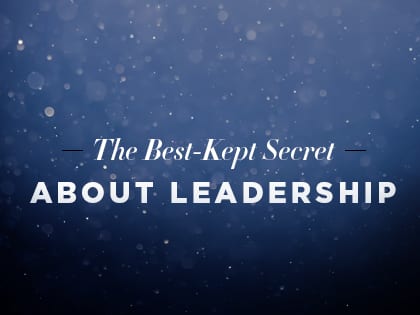 I recently discovered why I’m feeling flu-like symptoms … it’s because the election season is in full swing.

We have been inundated with endless commercials persuading us to vote for a particular candidate. Honestly, I am not interested in hearing another narcissistic, self-serving pitch.

I’m more interested in hearing how they’ll get back to serving the people. The world doesn’t need new leaders cut from the same self-serving cloth. We need to help them discover the best-kept leadership secret in plain sight—servant leadership.

Being a servant is often frowned upon. Instead, life is all about being successful—and that doesn’t quite equate to being a servant. The world tells you to have ambition and drive so you can one day lead as CEO. But self-promotion seldom results in effective leadership.

If you are only focused on what you want, if you rise up through manipulation and power plays, only you benefit. As a result, that leadership is seldom influential.

A truly effective leader is defined by a different heart attitude.

This attitude reflects in the success of the people that they work with and manage. It is evidenced in the organizations they lead, and it dramatically affects a business’s bottom line. Their secret is simply that they lead people by being a servant to them.

Can You Lead and Serve at the Same Time?

When you picture a servant you probably think of someone with a low position. A leader, by contrast, is someone who is elevated by title. How is it possible, then, for a person to be both a servant and a leader?

One of the best examples of dichotomy is Jesus Christ, who is arguably one of the most influential men and leaders of all time. He had thousands of people following him as he moved from town to town. He was looked up to as a great teacher and healer, and did many miraculous things.

From Outreach Magazine  What Will Church Attendance Look Like in the Future?

Jesus knew that the Father had given him authority over everything and that he had come from God and would return to God. So he got up from the table, took off his robe, wrapped a towel around his waist, and poured water into a basin. Then he began to wash the disciples’ feet, drying them with the towel he had around him. (John 13:1-5)

For believers, Jesus was and is the Leader of all leaders. Yet one night while having dinner with a group of his closest friends, this leader stripped down to a servant’s attire and washed the feet of his followers. This was not an act of manipulation. It was an act of love.

He had chosen them to lead and succeed him in his ministry. In washing their feet, he was demonstrating that for them to be effective leaders, they needed to have the attitude of a servant.

Characteristics of a Servant Leader

A servant leader is someone who understands the bigger picture. They know the benefit of putting the group, individual or organizational agenda ahead of their own. A servant-hearted leader understands that their task is to equip and empower those they lead.

By helping group members or employees achieve their goals, servant leaders know they are enriching the organization as a whole. A leader who is a servant is secure enough to know that serving others takes nothing away from their leadership position. A servant leader is confident. They do not need a title.

They take on the role of a servant, willingly out of love. They have a true desire to help others and happily initiate service even when there is no direct benefit to them. An influential leader ignites an organization’s potential and drives the vision by being a servant him or herself.

From Outreach Magazine  How We Did It: Church Plant Launch—Part 2

You, too, can be an effective leader by having the heart attitude of a servant as you empower, equip and encourage others.

Clarence Stowers is the pastor of Mars Hill Bible Church in Chicago, Illiniois. He has been in full-time ministry for 20 years.