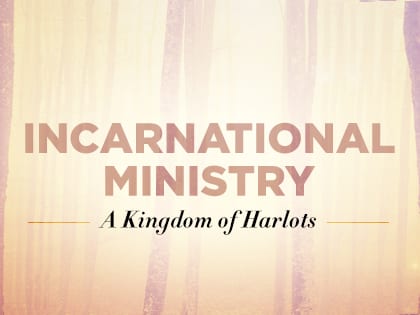 Hugh Halter: “I wonder if we spend too much time condemning people who don’t live as ‘clean’ as we think they should.”

Among the prominent church conversations that have hit the streets in the last decade, the “missional” conversation takes the cake as the most complex.

The term “missional” encapsulates the church’s sending nature and calling in the world. We are supposed to be a people who are out there, in every neighborhood, living with an intentional, prayerful and active focus on the lost and the least. Most would agree that we cannot sit back in our seats and pews anymore. So why don’t we go?

I think it’s because we don’t know how to go or know what to do once we are out there. That’s why the word incarnational is so important. If missional is going, incarnational is how we go, what we do as we go and more importantly, how we are to be with people while they are stuck in sin.

The incarnation meant that God not only came to earth to die for our sins, but also that he was our friend while we were still sinners. This is an important distinction because so many Christians try to go out into the world to witness but get derailed when they run into people in the midst of sin. In other words, we like the idea of going out into the world—except when we run into worldly people.

I believe we must learn to focus on Genesis 1 and God’s created purpose for a person, instead of always looking at a person through the lens of Genesis 3, after the fall.

Often, we put a person “in” or “out” of God’s grace based on what we think they believe or based on their behavior, instead of viewing them through a redemptive lens. A redemptive lens helps you see that God has been at work, is presently at work and will continue to work in someone’s life way beyond what we can see.

Being a minister of reconciliation, especially in true incarnational Jesus form, never involves forcefully pressuring someone to change now. Instead we are called to walk alongside them as a friend, even while they unremorsefully sin. Does our proximity and presence mean we condone their lifestyles? No. It just means we don’t abandon them when they sin. This is what the incarnated Jesus did, and so we have the permission and protocol to do likewise.

For example, we would never consider that God might see Rahab—a woman who lived a life of public and private humiliation—as an example for us all. But she is. According to James, she is honorable for her faith and courage in hiding God’s warriors (James 2:25).

I wonder if we spend too much time judging, writing off or condemning people who don’t live as “clean” as we think they should. I wonder if we’re too harsh with our own friends, our children or our spouses when they live out their brokenness.

If the kingdom is all around us, it includes people of all types, sins, behavioral disorientations and levels of maturity. At the very least, may we cast off all judgment and leave the wheat and tares to God. At best, may we thank God that he includes us, despite our brokenness, in his kingdom and his grace-filled redemptive plan.

Hugh Halter is the U.S. director of Forge America, an apprenticing community committed to training men and women to live as missionaries where they already are. He is the author of a number of books, most recently Flesh: Bringing the Incarnation Down to Earth and Brimstone: The Art and Act of Holy Nonjudgment. For more information: HughHalter.com