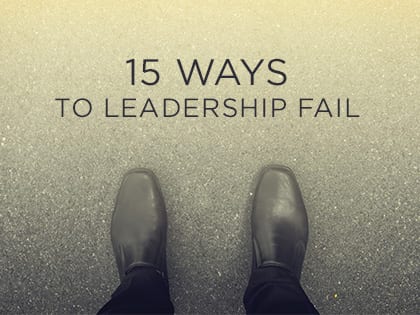 Brad Lomenick: Are any of these key indicators present in your leadership?

It’s ultimately up to you to lead well. It’s your responsibility to be the best leader you can be. We see lists all the time of what makes a great leader, but what’s the other side of the equation? In what ways is your leadership dysfunctional? What stands out as areas to improve? What’s killing your leadership momentum?

Check out these key indicators, then prepare to reimagine, re-engage and recommit.

1. Pointing fingers and blaming others.

Blame gets passed around like a bad virus. Trust is gone. Everyone is cordial but behind closed doors there is deep distrust.

2. A focus on the wrong priorities.

This is usually evidenced by a lack of willingness to confront the key areas, and a constant default to sideways energy. You might put more energy into scheduling lunches than bringing in new revenue, and spend more time on updating the employee handbook versus getting on the phone and finding new customers. Or you might spend more time updating headshots on the website than working on the strategic plan for next year.

Making decisions based on whoever pays you the most, whoever screams the loudest and whoever requires the least amount of effort and pain is poor decision-making. Everything starts to become about the lowest common denominator and the lowest barrier to entry.

4. Passing along the decision stick.

Leaders are decision makers, pure and simple. Counting on someone else to make a decision, other than you, or putting things off so that someone else will have to fix them later is just “kicking the can down the road,” as John Maxwell says.

5. Allowing bureaucracy to be an excuse for getting nothing done.

This is way more prominent than it should be. Blaming it on the “they” in your organization or industry leads to “them” vs. “us.” Watch out for the “they” mentality.

6. Personal entitlement has taken over.

This applies to leaders who cause contention instead of listening and looking to create collaboration and areas of common ground.

8. No one values each other and silos exist everywhere.

Staff meetings and leadership team meetings start getting cancelled on a regular basis. Lack of communication between key people and teams becomes normal. Cliques and gossip become rampant in the void of communication and trust.

No one feels able to do anything about any situation.

10. The work and environment is mundane.

11. There is no accountability.

People on your team feel like they can do whatever they want, whenever they want. Everything is last minute and late. Nothing goes out on time, or gets scheduled on time. No one knows where anyone is. This will drive your best team members crazy.

12. Not willing to confront the brutal facts.

This typically feels like a major loss of reality and not willing to confront what is really going on. The leader is living in “Hopa Hopa Land” and suffering from reality deprivation. A lack of self-awareness is prevalent here, as well.

There’s a lot of hype, but very little true and authentic hope for the future; lots of promises made but very few promises kept. The painting of a preferred future has turned into a hype machine that everyone sees through.

No one is ultimately responsible. The responsibility tree has been chopped and split up so many times you can’t really figure out who is driving what and who has responsibility for what.

15. Safe, secure and stable starts to drive the future.

Instead of innovation, creativity, risk-taking and courage, holding on tight and control is the posture. Instead of generosity, catch and release, margin and big picture thinking, “don’t rock the boat” is the inspiration—which quickly becomes uninspiring.

Brad Lomenick is a speaker, writer, leadership advisor and founder of Blinc Consulting. For more than 10 years, he served as president and key visionary of Catalyst, one of America’s largest gatherings of young leaders.