Home Features Dan Kimball: A Church of Many Pastors 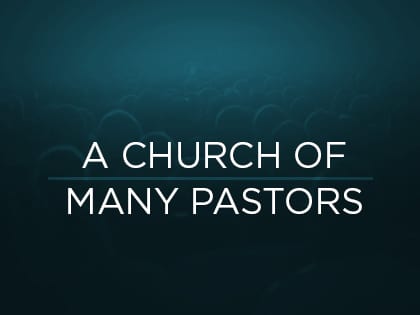 “‘Pastor’ is a metaphor for someone who spiritually cares for people. I want to be a leader who makes sure pastoring happens.”

I was recently in a meeting with a well-known Christian author who shared why he doesn’t like the word “leader” being used for a pastor in a local church. He was quite passionate about building a case: He said that the word leader is not used in the New Testament; that pastors should be shepherds, personally caring for people; that seeing ourselves as leaders shifts the dynamic of a local church. He went on to say that a pastor should know every person’s name in the church and a pastor’s home should be open to the congregation.

As I listened, in one way I felt, “Absolutely!—I totally agree!” And in another way I felt, “If we do that, we are going to be burned out, emotionally overwhelmed and not make it very long in any church.”

My pastoral experience has been in two very mission-focused, growing churches. I led a high school ministry of more than 300 students in weekly meetings and a young adult ministry with around 1,000 in attendance each week.

One day during that time, I was walking out of a restaurant and heard a car honk. I looked over and saw two college-aged girls waving and looking in my direction, but I didn’t recognize them. The light turned green and they yelled out as they pulled away, “You’re our pastor!” It really hit me: They saw me as their pastor but I had no idea who they were. I had no idea about their names, their struggles, their hopes or their dreams.

What scared me was that they identified me as their “pastor” because I taught on Sunday and they saw me there on the stage. I also led the staff and worked with volunteers who were involved, but was that the biblical understanding of a “pastor”?

Knowing and Being Known

When I think of New Testament pastoring I do see teaching, but the church met mainly in homes, usually with less than 50 people, and you truly could know people—that seems a lot more like “pastoring.” Jesus gave the example of a shepherd noticing when one sheep was missing, and going after it. So in that case there were 100 that a shepherd cared for. I thought of some smaller church pastors who were more like the New Testament model. They are in churches generally under 200 people and they truly do know everyone’s name and interact with each of them regularly. But then I began thinking of pastors in churches like those I was in that have 2,000 or more people in them. It is almost impossible to know every person by name and for everyone to be in your home. This is why churches developed small groups, so people could be cared for in smaller settings.

A Church of Many Pastors

I have chosen not to use the title “pastor” too often. I have shifted to say that there are many “pastors” in our church and they are the people who are personally shepherding and guiding others. Additionally, we keep stressing that our role as leaders is to make sure that the people of the church are pastored. Someone knows their names, and knows if they are missing.

“Pastoring” is the term the New Testament used and a beautiful metaphor for someone who spiritually cares for people. But how many who use that title truly function in the way the New Testament church would have defined “pastors”? As for me, I want to be a leader who makes sure pastoring happens.

How Will the Church Respond to a Changing World?

Planting a Church That Outlives Itself