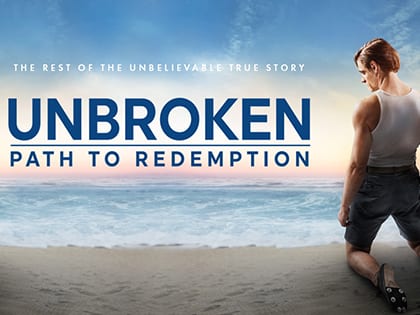 Two faith-based, true-to-life films spotlighting the consequences of war on those who serve will debut in theaters this fall.

The first movie, Unbroken: Path to Redemption, will open Sept. 14 and tells the story of how Olympian and World War II hero Louis Zamperini struggled to cope with post-war life until he found Christ at the 1949 Los Angeles Billy Graham Crusade. Rated PG-13, the film picks up where the 2014 movie Unbroken stopped.

The second faith film, Indivisible, will open October 26 and follows the story of Army Chaplain Darren Turner, who returned home from Iraq in 2008 with mental and emotional scars from what he had experienced. It is not yet rated.

Both movies tackle similar issues: post-traumatic stress and the pressures that military life and war can place on a marriage.

Filmmaker Matthew Baer, who produced the 2014 Unbroken film and the newest one, said little was known about post-traumatic stress when Zamperini came home.

“One of the most tragic aspects of what happened after World War II was the lack of proper psychiatric care,” Baer said. “If you look at some of the actual World War II medical videos, the expectation from the psychiatric community was basically that this would be something that they would just be able to get over by trying to move forward. So there was a fundamental lack of understanding about what PTSD actually was. And so many of the vets suffered an endless amount of difficulties.”

Unbroken: Path to Redemption stars Samuel Hunt (Chicago Fire, Chicago P.D.) as Zamperini and Merritt Patterson (The Royals) as his wife, Cynthia. Will Graham, the grandson of Billy Graham, plays the famous evangelist.

“The minute you heard [Will] say the lines, it was uncanny how much he sounds like his grandfather,’ Baer said, “and having listened to the videos of Billy Graham speak all these years, I was so blown away by how much the cadence of their voice was similar.”

The movie shows Darren meeting the spiritual needs of soldiers and Heather launching a ministry for spouses, but both of them struggling to keep their marriage strong while separated. When Darren returns with post-traumatic stress, their relationship worsens.

The real-life Heather said she hopes moviegoers will get a glimpse of the pressures faced by military families each day.

The daily reality, Heather added, is that in the midst of “single parenting” and conducting daily chores, you “could get a knock on the door” learning your spouse is dead.

The lessons in Indivisible, Darren said, are for everyone.

“My hope,” he said, “is that people will leave [the theater] encouraged—that if they may have walked into the theater being discouraged in their marriage or family and relationships, that they find hope. And ultimately, that they understand the power of forgiveness.

“We relearned … what forgiveness truly entailed,” Darren added of he and Heather. “I walk in the fact that I’m forgiven in Christ. Who am I to withhold that from my spouse?”

Michael Foust is an award-winning freelance writer and father of four children. He blogs at MichaelFoust.com.

Why Pastors Have a Unique Responsibility to Counsel