Home Resources Books Was My Love of Sports an Idol? 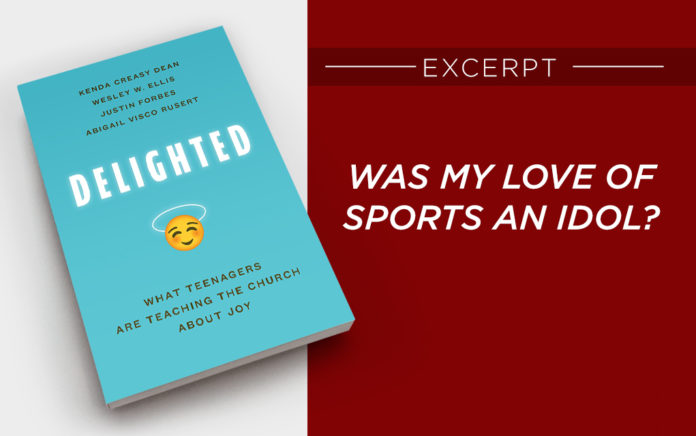 I was that kid in high school—the one who excelled at youth group. I enthusiastically participated in every youth event, mission trip and youth group gathering the church had on offer. When my grades suffered, my parents punished me by grounding me from church. Mostly, it worked.

When my youth pastor (we’ll call her Rachel) asked if anyone wanted to pray before a meal or to open a youth group meeting, my hand went up. Rachel was a bold and dynamic preacher who challenged and captivated young people’s attention, especially mine. I was “on fire,” as they say, and my peers looked up to me. Rachel became my mentor.

My youth group was part of a popular church in town—but it was not the church to which my family actually belonged. The church my family attended was a small mainline church with a little brown steeple in the middle of town. The pastor, Alex, had a quiet, warm personality; he prepared short and thoughtful sermons, but he wasn’t exactly a “10” on the dynamism scale.

My home church didn’t really have much of a youth ministry program, so I lived a split existence. While I continued to go to church with my family on Sunday mornings, my heart (and every Wednesday night) belonged to youth group. I liked Alex, but I wanted to be Rachel!

I was genuinely committed to my faith, but I also passionately loved football and wrestling. I was team captain for both sports at my high school—and if I wasn’t in church, I was in the gym or on the field.

Rachel often asked me how I was doing in my relationship with God, sometimes asking me to rate it on a scale of 1–10. When I talked about football or wrestling, she often stopped me, saying something like: “I know how much you love sports—but I worry that you might be loving football and wrestling more than you love God.”

I struggled with Rachel’s response, not only because her words were convicting but also because they came from someone I respected. What if she was right? Still … it felt like she was wrong. Even when I chose church over sports, the sparkle in my eyes when the conversation turned to football or wrestling gave me away.

From Outreach Magazine  Can I Trust God Even When It Hurts?

Sports gave me a joy I could not deny. I often accepted Rachel’s guidance, but inside I wondered how something that brought me such joy could be a problem. It began to bother me that Rachel had never attended one of my games or matches. Maybe if she watched me on the field, she would understand. As time went on, it pained me more and more that my mentor never really celebrated the thing I loved, and never really celebrated me.

It didn’t occur to either one of us that God might have given me that passion for sports in the first place. Instead, this conflict between my faith and sports created real anxiety. I often felt guilty about my desire to play and my love of competition. I wanted to please Rachel; I did not want to make sports an idol, and I knew I loved God. But I could never make myself quit sports. As time went on, I felt more and more insecure.

Meanwhile, Alex quietly attended just about every game I played. He rarely said much and often came and went without making his presence known at all; I learned he had been there the following Sunday, when he mentioned something about the game. Most of the time, I just caught him out of the corner of my eye; he would smile and wave from a distance and then resume cheering from the bleachers.

The thing was, Alex wasn’t an adamant fan of football or wrestling (especially not wrestling). But he knew how much joy sports brought me, and he chose to share my delight. And it wasn’t just me. Alex knew what most of the youth in his little church did in their spare time, and he spent the better part of his week attending our baseball games, drama performances, track meets, even marching band performances. He never seemed to have a motive other than caring about us, and he celebrated the things that brought us joy.

For a long time, I was too preoccupied with Rachel’s absence to pay much attention to Alex’s presence. But after a while, I found myself looking for Alex at my games and matches. More often than not, he was there. My faith was becoming a source of freedom instead of a source of anxiety. I started to worry less about Rachel and began to enjoy my passion for sports. I began to wonder if maybe God enjoyed sports too.

During my junior year, our team was poised to win the league championship, and I had a shot at winning my weight class. It was my first chance to be an outright varsity champion of the Valley League. I felt like I had been preparing for this moment for my entire life. Then it happened: the match was scheduled during a youth ministry event. I had to choose.

Naturally, I asked Rachel about it. “I don’t know, Wes,” she said. “It feels to me like God is testing you. Are you gonna choose your faith or your sports?”

Suddenly all the old anxieties about my faith returned. I panicked a little. But the following Sunday morning, just after worship at my family’s church, Alex found me during the fellowship hour. He smiled and said, “Congratulations, Wes! I am so excited to see you wrestle at the league championship. I think God is excited for you too!”

I was taken aback. For the first time, I realized that I didn’t have to choose between faith and an activity I truly loved. In fact, God had not only given me a gift for sports, God had given me a friend to share in my delight. In Alex, I not only had a pastor; I had a friend.

The league championship was a triumph, for our team and for me personally—not just because I won a trophy but also because I had a friend to share it with. About five years later, I decided to become a pastor too. Once I had wanted to be like Rachel. Now I wanted to be like Alex.

Excerpted from Delighted: What Teenagers Are Teaching the Church about Joy by Kenda Creasy Dean, Wesley W. Ellis, Justin Forbes and Abigail Visco Rusert ©2020 (Wm. B. Eerdmans Publishing Co.) Reprinted by permission of the publisher.