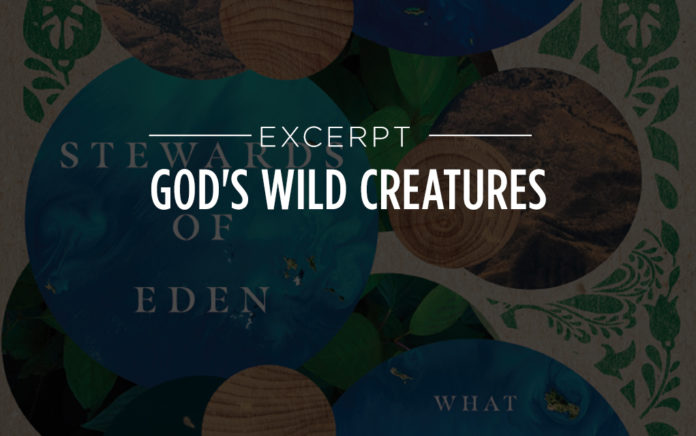 We have a responsibility to protect the habitats of God’s creatures.

Excerpted From
Stewards of Eden
By Sandra Richter

In chapters 38 and 39 of the book that bears his name, Job, the long-suffering servant of the Most High, is hammered with a series of questions from on high. The intent of the interrogation? To remind Job that he is creature, not Creator.

“Have you ever in your life commanded the morning, or caused the dawn to know its place? … Have you entered into the springs of the sea, or have you walked in the recesses of the deep? … Can you stalk prey for a lioness, and satisfy the young lions’ appetites as they lie in their dens or crouch in the thicket? … Do you know when the mountain goats give birth? Have you watched the calving of the does? Have you counted the months they carry their young? Are you aware of the time of their delivery? … Is it by your understanding that the hawk soars, stretching his wings toward the south? Is it at your command that the eagle mounts up, and makes his nest on high?” —Job 38:12, 16, 39–40; 39:1–2, 26–27

When I hear these questions voiced, I echo Job’s response: Surely not I. I can hardly understand these marvelous things, let alone mimic or duplicate them. Only the master of the universe can call an eagle from its perch or command the dawn to take its place. So I, like Job, respond to creation with praise for the Creator. When I stand at the ocean’s edge and feel the spray of its raging force on my face, when the wind silences me, when I am privileged to hold a wild creature in my hands, my heart cries out with the psalmist, “O Yahweh, our Lord, how majestic is your name in all the earth!” (Ps. 8:9).

Why is my heart moved to worship by the splendor of an eagle on the wind, the staggering realities of life in all its complex forms? Why do I sit in front of my television watching March of the Penguins with my 7-year-old and find myself in awe of a God who could instill in the heart of a penguin a level of self-sacrificial obedience that puts this believer to shame? The answer is most simply because the cosmos, in all its beauty and complexity, is a reflection of the God who made it. And I am made in the image of that same God. So the part of me that remembers Eden is stunned into silence when I step into a meadow and unexpectedly lock eyes with those of a wild creature. The part of me that can still hear the echo of the Maker’s song laughs with joy when I see dozens of common dolphins race across the channel so they can “bow ride” off the front of my whale-watching boat—diving in perfect synchronization, breathing as one, sleek and shimmering in the sun. There is no question that our God has graced this planet with creatures of such amazing beauty and skill that it nearly defies imagination. Wild and fierce and yet oh so vulnerable, these are the creatures that God has entrusted to ʾādām.

So what do the Scriptures have to say regarding the wild creatures that inhabit this planet with us? The Bible makes it very clear that even in a fallen world, God rejoices in the beauty and balance of his creation. It is Yahweh who “sent out the wild donkey free” and “gave to him the wilderness for a home” (Job 39:5–6). In the flood narrative, although God judges the world because of its corruption, he rescues animal-kind along with humankind, and his re-creational covenant is with “every living thing … the birds, the domestic animals, and every wild creature of the earth” (Gen 9:10–11). In the elevated language of Psalm 104 we read,

“He is the one who sends forth the springs into the wadis;
between the mountains they flow;
giving drink to each of his wild creatures.” —Psalm 104:10–11

The Scriptures teach us that Yahweh has designed our ecosystem so that his wild creatures will have the food, water, and habitat they need to survive and flourish.

“The trees of the Lord drink their fill—
the cedars of Lebanon that he planted.
Where the birds make their nests,
and the stork builds its house in the cypresses.
The high mountains are for the mountain goats;
the crags are the refuge of the rock badgers.” —Psalm 104:16–18

Clearly, God has intentionally provided this vast array of creatures the habitats necessary to their survival. But as any environmentalist would tell us, the single greatest cause of the extinction of an animal species is the destruction of its habitat. And in America we are presently devouring nearly two million acres a year in the noble quest for urban sprawl. As a result we are also experiencing a species extinction rate of as much as one thousand times the historical loss ratio. It would seem that “we in the industrialized world have [indeed] allowed our appetites to outrun both our resources and our humanity” and have reached a point where we need balance, “a balance we scarcely any longer recognize.” And the fact that the wild animals’ habitat was designed and given to them by our God should inspire us to reconsider our reckless behavior.