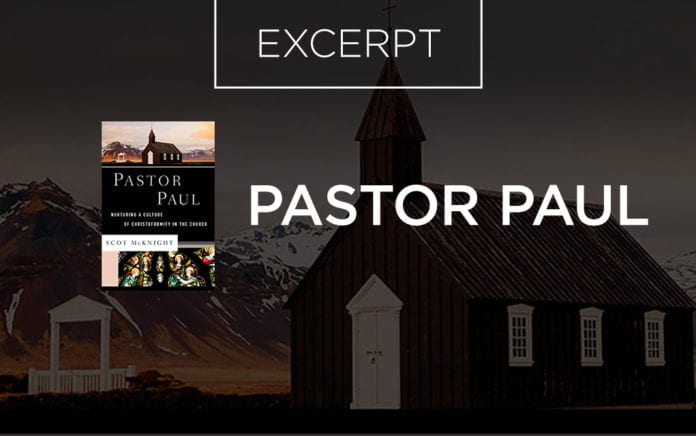 The apostle Paul saw his role as helping the body of Christ grow in Christoformity.

My go-to definition of pastoring is this: a pastor pastors people. People will occasionally ask if I think they are called to pastor, and my go-to answer is a twofold question: Are you presently pastoring anyone? And who sees you as their pastor? Pastoring is not a job one gets when one graduates from seminary, the way one gets a job as an engineer, but is a calling on one’s life that grabs hold and turns a person into a parson. The parson’s way of life is pastoring.

To pastor means to nurture Christoformity in both individuals and congregations. Pastors are designed for what used to be called the “cure of souls” and what Eugene Peterson once called the “ministry of small talk” about ordinary life. In another context, he wrote about Paul and said, “Pastoral theology, as Paul lives and writes it, is relational—persons are involved as persons-in-relationship.” Many today, such as Margaret Whipp, define pastoral theology as a theology of care.

To do so opens the aperture to see that pastoring is about pastoring people in each person’s specific realities. The irony of pastoring today emerged in the recent Barna Group study called The State of Pastors.

When pastors were asked what they like to do most, 66 percent said preaching and teaching. “There is a big drop-off from there,” Barna concludes. “One in 10 says ‘developing other leaders’ is their most enjoyable task (10%), and 1 in 12 prefers ‘discipling believers’ (8%). ‘Evangelizing’ (6%) and ‘pastoral care’ (5%) bring the most joy to smaller proportions of pastors, and a mere 2% say they enjoy ‘organizing church events, meetings or ministries.’”

How unlike Paul. He calls pastoring a “daily pressure” and speaks of his “anxiety for all the churches” (2 Cor. 11:28). When he leaves the church at Ephesus, which I consider his favorite church, he says he has been warning everyone “with tears” (Acts 20:31). So concerned is he over the response of the Christians of Corinth, which I consider his least favorite church, that he tells them his “mind could not rest,” and he has to avoid a golden opportunity for ministry (2 Cor. 2:12–13). He pleads with them to “make room” in their “hearts” for him (7:2). When he gets the good news from Titus of their positive response to his message, he says it is God who “consoled” and that Paul “rejoiced” (7:7). One senses here the heart of Pastor Paul: His emotions are shaped by how his churches are responding and growing in Christlikeness.

To the Thessalonians Paul writes that he treated them as a mother (1 Thess. 2:7) and a father (2:11): “As you know, we dealt with each one of you like a father with his children, urging and encouraging you and pleading that you lead a life worthy of God, who calls you into his own kingdom and glory” (vv. 11–12). He even says the Thessalonians had received his teaching as if it was God’s very word (v. 13). Perhaps the most revealing pastoral moment in this splendid little unity in the middle of the letter is that for him and his companions to be separated from them was like being “made orphans” and that he and Silvanus and Timothy “longed with great eagerness to see [them] face-to-face” (v. 17). When the separation was too much, he sent his good friend Timothy (3:1–2; see 3:5). And the loving pastor knows exactly what Paul means when he says, after hearing good news upon Timothy’s return, “For we now live”—under what conditions?—“if you continue to stand firm in the Lord” (3:8). Paul pastored God’s people. Henri Nouwen, in his classic book on pastoring called The Wounded Healer, describes pastoring in those very terms: pastors are wounded healers.

From Outreach Magazine  One Neighbor at a Time: FBC Branson

They are themselves wounded; they are themselves finding healing; and as ministers they are wounded by the sufferings of the world and their people; and they are called to minister the graces of healing. So the first element is that pastors nurture a culture of people, and people—not programs and pews and plans—are the focus.

Not just individuals, which is the downside of too many books today on spiritual formation. That is, spiritual formation is understood as “me and God” and “intimacy with God” and “how to pray” or “practicing solitude.” I’m not against any of these, and I’m all for each of them, but formation in the Bible is first about being formed as a community, as a church, as a fellowship. Through that, formation becomes personal and individual. The fundamental and primary formation virtue in the New Testament is love, love for God (individual) and love for others (communal). Love, in fact, is never alone: love is for the other. James Thompson gets this exactly right when he observes that for the Pauline Christians “the test of their progress will be their capacity to exist as a family within the community of faith.”