Home Resources Books Why We Can’t Ignore the Past 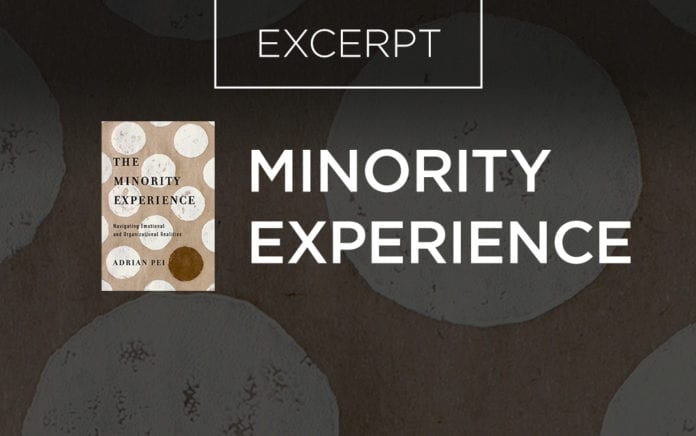 No matter our individual intentions, the past informs the way we relate with other ethnicities today.

Excerpted From
The Minority Experience
By Adrian Pei

The Weight of Words

Just around the block in my neighborhood there’s a restaurant called Yellow Fever. To many Asians, the term yellow has negative connotations because of the way it has been used throughout history to demean their looks or status in society. I must admit that, although I enjoy the food that the restaurant serves, I find it hard to eat there because of the name. But it would be much worse if the restaurant weren’t run by Asians, but by whites.

Many people are familiar with the sitcom Fresh Off the Boat—another term that I used to hear in the playground to insult Asian immigrants who didn’t speak very good English. Again, the show would be very different if it didn’t feature so many Asian American actors but was filled with white people making fun of Asians instead.

Why is this the case?

Why is it that some minority groups can say certain words to one another within their own culture and community? Why is it that when majority culture people use that same word, it’s so offensive?

Again we must consider the impact of the past. It’s offensive when white people use the word yellow or the initials F.O.B., because there is history of whites demeaning Asians or communicating that they don’t belong—not just through words, but through events like the Chinese Exclusion Act and Japanese internment camps. Because of the history of racial slurs, the person who’s speaking it makes all the difference in how it’s communicated and interpreted.

I remember watching an episode of the reality television show Survivor when an African American man named Phillip was very sensitive to an older white contestant (Steve) who used the word crazy to describe him. Phillip explained the history of words like crazy and boy, which were used by white people when blacks were enslaved.

From Outreach Magazine  Why You Are Already a Sending Church

The white contestant simply could not understand and kept on insisting that he had “no prejudice” in him. Steve claimed he didn’t mean anything other than simply remarking that Phillip had been acting “crazy” like anyone else—regardless of race!

However, no amount of insisting on his intentions could change the associations that came with those words for Phillip. It was another example of how we can’t escape the impact of the past. If you’re from the majority culture and a minority reacts to a word or phrase that you say, it may have very little to do with you personally. In fact, someone might feel anger or fear—no matter how eloquently or competently you communicate—simply because of what you represent to them as a member of the majority culture.

Of course, that doesn’t mean we shouldn’t try our best to be sensitive. But we shouldn’t forget how much the history of majority and minority dynamics still shapes us today, in ways we feel very strongly and tangibly in our relationships and debates.

As an ethnic minority, I am not part of the white history that drove Native Americans from their lands. However, as a person living in the United States, I share in the benefits of the settlers’ actions. I have a home and enjoy privileges based on past and present acts of power of which I am not even conscious. Most importantly, as the late Native historian Jack Forbes once emphasized, I am responsible for the society I live in, which is a product of the past.

What might it look like if the past were acknowledged more often in race-related conversations today? In the debate over professional athletes standing for the United States national anthem, it’s a completely polarized choice. Either they must stand and accept everything the anthem stands for, or sit and be perceived as rejecting one’s country. What if prior to playing the anthem, someone were to acknowledge the realities of American racial inequality and oppression, and how the song is not a symbol of perfect unity, but of a reminder of how we must continue to strive for justice for all? Can you imagine how powerful something like this could be? How might it speak to minorities, who feel the onus is entirely on them to make an impossible choice between their ethnic communities and the country they love?

In any current race-related event, there is some aspect of history that strongly impacts how people perceive and react to it. That’s because the past isn’t over and done with. It lives in the present.

From Outreach Magazine  The Hiddenness of God