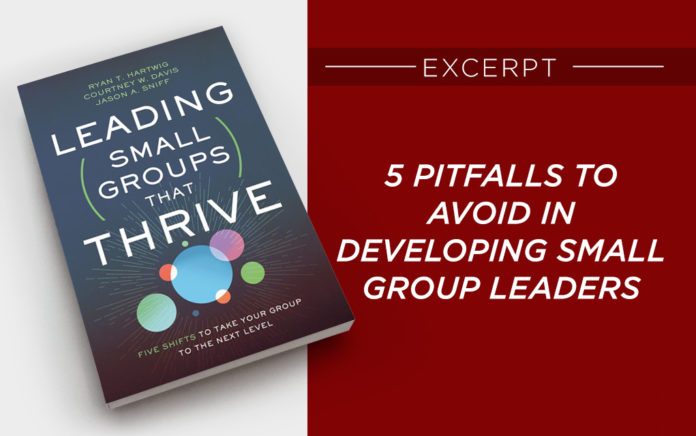 Excerpted FromLeading Small Groups That ThriveBy Ryan Hartwig, Courtney Davis and Jason Sniff Both pastors and leaders indicated to us that their greatest needs are recruiting and developing leaders. Even though ministries are spending a ton of time and resources discussing strategies to do just that, there still are not enough effective leaders. If we […]

Both pastors and leaders indicated to us that their greatest needs are recruiting and developing leaders. Even though ministries are spending a ton of time and resources discussing strategies to do just that, there still are not enough effective leaders.

If we cannot consistently raise up new leaders, the growth and impact of small groups are stymied.

Certainly we need more leaders, but we also need better, more effective leaders. As we mentioned earlier, when a ministry is able send out a sufficient number of equipped leaders, incredible movements are made possible.

In our research, two-thirds of groups surveyed indicated that they had sent out at least one person or couple to lead a new group, while only 4.5 percent of the groups surveyed had sent out more than two people or couples. On one hand, that’s incredible—two-thirds of the most effective groups we studied have sent out leaders. But that also means almost one-third of the groups pastors identified as effective have not sent out capable leaders to lead new groups.

Why is the church unable to raise a sufficient number of qualified leaders? We believe there are five primary reasons.

1. Too Many Leaders Try to Do Too Much.

One of the greatest culprits of a lack of leadership development is leaders taking on too much. Too many leaders have a “Superman” or “Superwoman” complex. OK, this might get awkward for a moment, but think about it:

1. Do you sometimes take on more than your fair share in your relationships?
2. Do your perfectionistic tendencies push you to make sure everything in your group is “just right”?
3. Does your need to be needed (Ouch! We know this might be painful!) spur you to be more available than you should be?
4. Does your competence drive you to keep tasks to yourself because you know you can accomplish them better than others?

In his excellent book Hero Maker, Dave Ferguson of Community Christian Church in Illinois explained what happens all too often:

“Way too many times in ministry, I’ve jumped in with “I’ve got it!” or even “This is my sweet spot,” and it never occurred to me—until too late—that I was blocking other people from the privilege and joy of using their faith or serving in their sweet spot.”

When you take on too much, others don’t have the space they need to bring their gifts and talents to the group, and you get more of what you ultimately don’t want—more responsibility, more pressure, more ownership.

One of the biggest reasons leaders don’t step forward is because of too much leader activity, not too little. If you want to create space for people to take on greater leadership, perhaps the best thing you can do is to strategically not do.

2. The Focus of Too Many Groups Is Insular.

Another reason the church experiences a lack of effective leaders is because groups focus too much internally, and not enough externally. When groups are only and always about the people inside the group, there’s a tendency to protect and preserve what already exists. This discourages emerging leaders from driving innovation and change, and creatively pursuing and connecting with others out- side the group. Great leaders push out the artificial boundaries of the group and influence group members to look and live outward. This requires greater leadership capacity.

3. The Leader Role Is Too Small.

There’s no need to identify or develop additional leaders when being a leader is super simple. Why bring a team together to make a peanut-butter-and-jelly sandwich? You wouldn’t. There’s no need. Beyond that, a group trying to make a sandwich would suffer from too many cooks in the kitchen.

When leading a group is as simple as reading a list of questions about Sunday’s sermon, there’s no need to spread the leadership burden. When groups take on more—often by framing and pursuing a purpose that is bigger than themselves—additional leadership is necessary, and that bigger mission opens up space for new leaders to fill.

4. Leaders (and Followers) Don’t Conceive That the Leadership Role Is About Building Other Leaders.

During his sophomore year of college, Ryan was a resident assistant, a role where a veteran student assists those new to the college experience by building community and serving as a resource. His future wife, Jill, happened to be one of his residents (a bit sketchy, we know, but don’t worry—they weren’t dating then). A few years later, they were reflecting on Ryan’s effectiveness as an RA. Ultimately, they disagreed about what kind of a leader he was. Jill wasn’t super impressed by his leadership; she said he wasn’t around much and that he didn’t engage her and others in their community enough in long, deep conversations. When Ryan asked her if she felt connected to the other members of their community and if she had long, deep conversations with others on campus, she said, “Yes!” without hesitation. Their perceptions of good leadership were quite different. For Jill, in that season and situation, leadership was about what the leader did. And she’s certainly not alone in that view. Many people would agree. We don’t fully disagree, either. What leaders do is incredibly important. But what they spur on for and in others is even more important.

From Outreach Magazine  Nicholas Piotrowski: In All the Scriptures

Finally, there are not enough effective leaders because the church often lacks systems to identify, develop, and deploy leaders. Leader- ship development often lives as a “would be nice to do” task item rather than a “the building or program will collapse if we don’t” issue. So it remains on the back burner. People with incredible leadership capacity and/or potential sit on the sidelines rather than stepping into the game. We all must build easy and effective on-ramps into small group leadership.