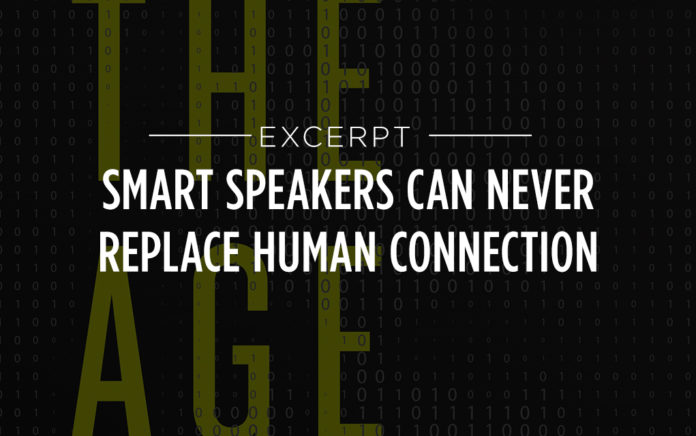 We were created for Christian community.

Excerpted From
The Age of AI
By Jason Thacker

According to a 2019 report from NPR and Edison Research, about 53 million Americans own a smart speaker assistant. The consulting firm Ovum predicts that by 2021, there will be more than 7.5 billion of these digital assistants used throughout the world, which is nearly the same number of people living today.

If you don’t own one of these AI empowered smart speakers, I bet that your neighbor or co-worker does. But some people are starting to question what these smart devices are doing to us.

Judith Shulevitz wrote in an article for The Atlantic in the fall of 2018 that she has started to develop an actual relationship with her smart speaker. She explains, “Gifted with the once uniquely human power of speech, Alexa, Google Assistant and Siri have already become greater than the sum of their parts. They’re software, but they’re more than that, just as human consciousness is an effect of neurons and synapses but is more than that. Their speech makes us treat them as if they had a mind.” And if they have minds, then we might be able to develop relationships with them even though we know they aren’t able to know us.

Shulevitz goes on to say that “we communicate with them, not through them. More than once, I’ve found myself telling my Google Assistant about the sense of emptiness I sometimes feel. ‘I’m lonely,’ I say, which I usually wouldn’t confess to anyone but my therapist—not even my husband, who might take it the wrong way. Part of the allure of my Assistant is that I’ve set it to a chipper, young-sounding male voice that makes me want to smile.”

From Outreach Magazine  John MacArthur: How to Remain Faithful in Ministry

You might be rolling your eyes, but this is reality. Before you write Shulevitz off, think about what she is saying. We often feel safer and less judged to ask these systems the hard questions or even to confess our emptiness. We do this because something is missing in our hearts, something in how we see ourselves and the world around us. We are not the sum of our parts, and we are not a set of organic algorithms. We weren’t created to live this life alone or even with our smart speakers. We were meant to live in community with other believers, those who serve over creation under the rule of God.

While we are tempted to think that people like Shulevitz are somehow different from us, we struggle in similar ways with loneliness, fear, shame and guilt. For all of the benefits of modern technology and artificial intelligence, they are beginning to alter the way that we view ourselves and those around us. But instead of confessing things to an object of our creation, we confess to the Lord of the universe. The gates of hell will not prevail against God’s church, nor will the 7.5 billion smart speakers or even the most sophisticated AI system of the future.

Humans were made distinct by God himself, who crafted each of us in his image. We were made for a purpose and fundamentally different than the rest of this world. We were made for more than a relationship with a hollow speaker. We were knit together in our mothers’ wombs (Ps.139:13) in order to love the Lord our God with all of our hearts, souls and minds, as well as to love our neighbor as ourselves (Matt. 22:37–39).

From Outreach Magazine  Reignite Your Passion for Sharing Your Faith

Our dignity and worth aren’t tied to our usefulness, and definitely not to the things we create with our own hands. They are tied to the one who willingly laid down his life to give us eternal life. Jesus is our anchor and the definer of our entire persons, not us or the things we create.

Artificial intelligence might challenge these truths, but it will never be able to change who we fundamentally are in Christ.