Home Resources Books Out of Our Ghettos 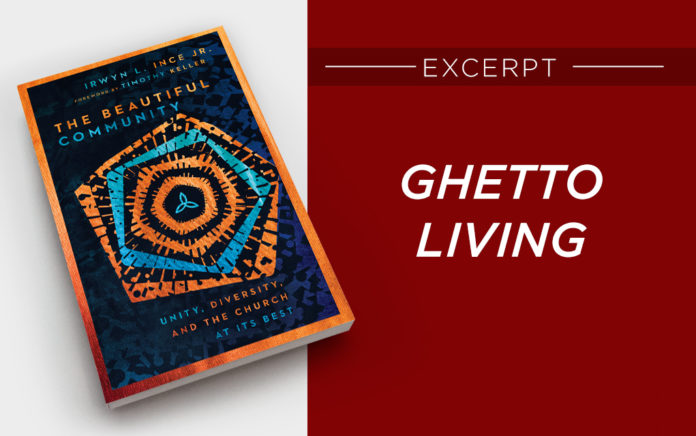 To seek unity, we must be willing to lay aside our preferences for the sake of others.

Excerpted from
The Beautiful Community
By Irwyn L. Ince Jr.

Instead of unity in diversity and diversity in unity, we find more examples of militant disunity in the human story. We find what I call “ghetto living.” By ghetto, I don’t mean a run-down, densely populated urban area characterized by blight, crime and poverty. I’m talking about ghetto as an environment where a group of people live or work in isolation, whether by choice or circumstance, and draw their sense of worth and dignity from their identification with that community. Biblically speaking, this kind of ghetto living has its roots in Genesis 11:1–9.

Babel is still with us. We are still in solidarity against God, yet this solidarity is expressed in isolated communities. These ghettos, because they are in rebellion against God, are also naturally against each other. So, what happens far too often is that we understand our human dignity and value as coming from isolated community. And we love our ghettos, our ethnic ghettos, our social ghettos, our cultural ghettos, our economic ghettos, our academic ghettos. And we love them to a fault. When we see cultural and ethnic differences, we don’t embrace our dissimilarity, we immediately distrust. We instinctively reject and often mock because we’re still confused and don’t understand each other.

Can I tell you something? You have no idea how much your understanding of what it means to be human, to live a good life, to experience love, to be a friend, husband, wife and worker is shaped by your ghetto. We’re blind to its many facets because we have swum in its water our whole lives. And when we see or experience something different, our first impulse is to react in judgment of that difference.

Put in theological terms, our racialized society is an outworking of our ghettoization at Babel. And the devastating reality is that groups of people still seek to serve the interests of their ghetto. The idea of different races is a social construct. It was created by humanity, but it is not a reflection of the beautiful image-bearing creative. It is strictly relegated to the sinful and depraved purposes of exploitation and oppression. To be clear, it served as a justification to overtake and enslave whole people groups.

Some Christians do argue that we shouldn’t even talk about race or use the word since it’s a man-made concept. Using the term only serves to further divide us. There’s only one race—the human race—so shouldn’t we just categorize differences between people with terminology like “ethnicity”? In a word, no. I believe that Scripture compels us to speak the truth about the primary way our ghettoization has manifested itself in the American context. Discarding the word “race” would make it easier to ignore the devastating and deadly impact of racialized ghettoization. Further, we would fool ourselves into thinking that this is just a problem of the past.

In a racialized society, racist ideas become embedded in individuals, institutions and systems. They manifest themselves in both aggressively active ways and subtly passive ways. However, every manifestation has the capacity for deadly violence. We have lived in ghettos ever since Babel, finding our sense of value and worth in our group. But whatever your group may be, it’s only a facet of the human experience. What’s most tragic is that Jesus’ church has a ghetto-busting responsibility, but it has, like the people of Babel, ignored that command.

How do we get out of the ghetto? What’s the solution to so much brokenness? It’s nothing short of the blood of Jesus. It’s in the community of the redeemed that we should see the dividing line of hostility broken down (Eph. 2:14).

What does this mean on the ground in our day-to-day lives? It means you have to walk with humility. You have to know that when we’re talking about and engaging the issues that still divide us in this land (and in the church), your thoughts are informed by the ghetto that formed you in ways that you’re simply unaware of. And we need to be shaped and reshaped by other brothers and sisters in the Lord who come out of different ghettos if we’re going to learn to love well and strive for justice and righteousness in our communities.

I used to say to the church I served that God was giving us a particular kind of grace as we pursued crosscultural living. I knew that we would regularly offend one another because we speak different languages. That is, we come from different ghettos. When we offend one another, that grace takes the form of asking ourselves, Why am I offended? Is the heart of this issue really about my preferences and desires that have been shaped by my ghetto? Would the Lord have me die to this for the sake of the unity of the Spirit in the bond of peace?

What I’m about to say may not be popular, but in America the greater burden of dying to preferences is borne by those in the majority white culture. Among the many points we can make about America’s founding, we must include the establishment of a white cultural normativity. Its existence has made the norm for minorities in America to embrace discomfort in majority culture contexts—an experience no less true in the church. As I mentioned earlier, we have no idea the depths to which our expectations, desires, preferences and predilections are informed by our ghetto. When your ghetto is the norm, your default position is to expect others to conform to your way of being.

From Outreach Magazine  To Save a Life