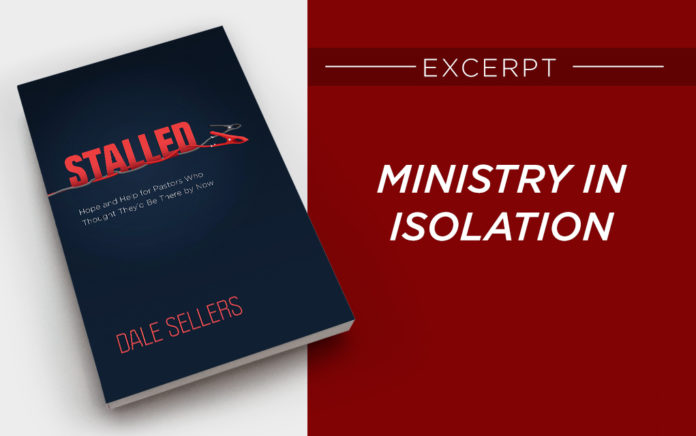 Excerpted From
Stalled
By Dale Sellers

I believe there is nothing more difficult for a leader to deal with than failure. Leaders hate to fail. For pastors, the pressure is even greater because we know that everything we do is out in the open for all to see. It has been said that the good things a pastor does look better than they really are. And the bad things a pastor does look worse than they really are. Unfortunately, it goes with the territory of being out in front of people consistently.

The problem of failure is compounded by the fact that most pastors have a deep-seated drive that can often distort the balance required to be a healthy leader. There is no greater calling on earth than shepherding people. It is both a great privilege and a heavy responsibility. The results of our actions carry the weight of eternal consequences. Truthfully, the pressure of pastoring never subsides.

This reality is why it is so important for you as a pastor to discover and consistently experience the benefits of kingdom principles such as Sabbath rest, healthy margin and dependency. The underlying theme in each of these concepts is that we can’t do it alone. Most pastors agree intellectually that we can’t do it alone, but we tend to cave in to the expectations of those around us as well as our own. Before we know it, we’re attempting to handle everything ourselves—alone. Some of us actually believe that Jesus has called us to lives of independence. Yet, in reality, our focus should be healthy interdependence.

As equippers, interdependence is at the core of our calling and purpose. An interdependent leader knows that equipping can’t be done in a vacuum. It requires interaction, a hands-on approach, if you will. This leader takes the time to get to know people and find out how God uniquely created them. This requires follow-through and patience. The motive of the interdependent leader is to help people find fulfillment by living out their purpose.

Independent leaders, however, often seem to create avenues for service in order to find people to carry out their vision. They recruit people to fill gaps instead of training people to use their gifts. This is where a lot of leadership training is either misunderstood or misappropriated. While it is true that great leaders get things done through others, the goal of great leadership isn’t isolation. The goal is building a healthy team that we lead while walking alongside them.

Equipping has never been about training people and then turning them loose, never to be seen again. Equipping is more about helping people use their gifts to grow God’s kingdom. As their pastor, you get a front row seat to watch them find their place. In reality, equipping is a lot like coaching. When it’s done well, everyone is a winner.

When our focus is healthy interdependence, Satan cannot derail us with the temptation of doing ministry alone. However, he can stall us out if he entices us in areas where we already struggle. Thankfully, though, God has put several warning signs in place to keep us from becoming stalled.

By studying 1 Kings 17–19, we can see the warning signs that preceded Elijah stalling out. You can probably relate to them.

Elijah did ministry alone in his early years. He did have a servant, but he didn’t have a team of co-laborers. Nothing dampens your passion and optimism more than feeling as if you are on your own when it comes to leading a church. Leading volunteers is one of the hardest jobs anyone will ever face. But it’s far better than going it alone.

The weight Elijah carried from seeing how far off track God’s people had become is heartbreaking. Spiritual leaders are not perfect, nor do we claim to be. However, we are sometimes dumbfounded by the actions of people in our congregations and their lack of conviction at times. Nothing in ministry contributed to the stress I experienced more than this. Seeing the poor decisions that family, friends, church members, and even fellow leaders made in direct opposition to God’s Word often left me speechless. And it also caused me to examine my own leadership.

You might wonder why you would examine your leadership. It’s because when pastors are leading on empty, they tend to blame themselves for the decisions of others. It’s common to think, That person probably would not have made such a bad decision if I were a better leader.

WARNING SIGN 3: FRUSTRATION FROM NEEDING TO GO BACK AND REBUILD

Elijah immediately had to go back to rebuild instead of moving forward to build something new. He knew he had to take the people back to the foundational principles of the faith before he could take them forward. This is why the Bible says in 1 Kings 18:30, “Elijah told the people, ‘Enough of that—it’s my turn. Gather around.’ And they gathered. He then put the altar back together for by now it was in ruins.”

From Outreach Magazine  Send a Welcome Video to New Attendees

Frustration and discouragement can develop when you’re leading difficult people. You realize you’re going to need to spend a great deal of time and energy on the fundamentals. It’s frustrating because you want to show the people where you plan to take them and then head out. But every good leader knows it’s a waste of time to blaze a new trail without addressing the unresolved issues that led to being stalled in the first place.

I had a pastor friend many years ago who experienced this firsthand. He had accepted the job of leading a new church with a great deal of expectancy and hope of making a huge impact. However, he soon realized he had inherited a staff and congregation who were extremely dysfunctional and injured. Every attempt he made to implement anything new was met with antagonism, distrust, and resistance.

As he sincerely sought the Lord for a solution, he sensed Him telling him in prayer one morning, “You are going to have to go back before you can go forward.” My friend knew that moving forward without addressing the baggage of the past would simply bring the same baggage into the future.

Being used by God to bring about a national revival drained Elijah. It’s fascinating to me that he became so intimidated by Jezebel’s threat that he ran for his life (19:2–3). Remember, he had just called fire down from heaven to consume the sacrifice and then killed all her false prophets. At this point, why would her threats concern him? The answer is simple. He was exhausted.

It is impossible to remain effective in ministry while simultaneously running on fumes. The major mistakes I have made as an adult always happened when I was exhausted. In the majority of my missteps, a direct correlation always existed between a lack of clear thinking and exhaustion.

Any pastor who continues to ignore these warning signs will end up stalled in ministry. Even the prophet Elijah dealt with some of these issues. I find it helpful to know that a man whom God used in such incredible ways also had some problems. You may have discovered this truth: your ministry can be the thing that destroys your ministry.

Excerpted from Stalled: Hope and Help for Pastors Who Thought They’d Be There by Now by Dale Sellers, ©2020. Used by permission of David C Cook. May not be further reproduced. All rights reserved.