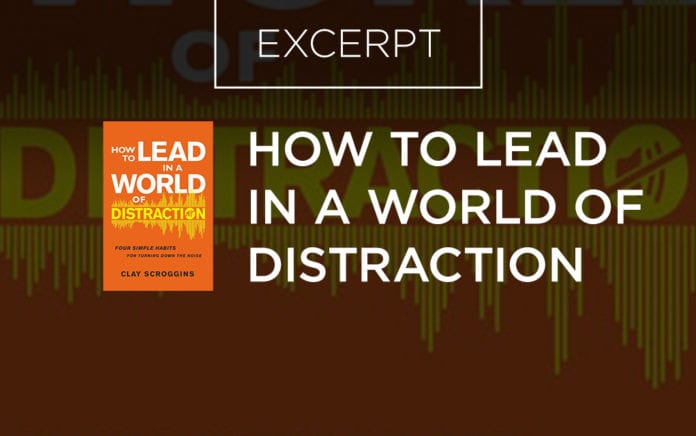 We have to eliminate distractions if we’re going to be effective leaders.

The only way to combat the old habits of distraction is to develop new habits to create space for emotional curiosity. These new habits provide the framework for the next four chapters—finding the why, speaking to yourself, getting quiet and pressing pause. Great leaders practice these habits intentionally and consistently to create and maintain emotional health. The trend line of your career progression will parallel the trend line of your emotional health. As you grow in emotional health, you will grow in influence. As you grow in influence, you will grow in opportunities. This correlation could not be more important.

The active ones are not only more effective but also way more interesting. These feats of audio magic go looking for frequencies to block out. Once they find an unwanted frequency, they create “their own sound waves that mimic the incoming noise in every respect except one: the headphone’s sound waves are 180 degrees out of phase with the intruding waves. That means about 70% of ambient noise is effectively blocked, making noise-canceling headphones ideal for airline and train travel, open office environments, or any other location with a high level of background noise.” What a fantastic concept!

In the same way, for you to achieve the optimal space for personal exploration and growth, you need to employ certain habits to cancel out the distractions interfering with your emotional health. For you to grow as a leader, or as a parent, friend, teacher or counselor, you need to employ these habits on a daily basis. Oh, and the best part is that these habits don’t cost nearly as much as noise-canceling headphones do. Interestingly, using them is free, but choosing not to use them is costly.

A CITY WITHOUT WALLS

Ever since my teenage years, I’ve been reading the book of wise sayings written mostly by King Solomon known as Proverbs. If you’re in a new leadership role or feel like you are in over your head right now, the book of Proverbs is a great place to ground yourself in common but crucial wisdom for all areas of life. Solomon uses a wonderful word picture to show what it looks like to lack emotional awareness and health in Proverbs 25:28: “Like a city that is broken into and without walls is a man who has no control over his spirit.”

Envision an ancient city without the protection or sophisticated technology of our modern military. What kept people safe in ancient times? What provided citizens with a sense of safety? It was the wall that surrounded the city. Without the wall, the city was always vulnerable to attack from enemies. And in this proverb, we have a word picture describing “a man who has no control over his spirit”—an emotionally unstable person. This is someone who is easily manipulated and controlled by how they feel. Think about the person who is easily angered, the person who can’t resist that impulse purchase, or that person who is easily manipulated emotionally or even sexually in a dating relationship. Like a city without walls, these people are left defenseless, easy prey for others who wish to control or take advantage of them. And all because they’ve failed to manage their emotions.

There are plenty of examples of this in the world of leadership as well. You don’t have to look very far. It’s the manager who feels threatened by a talented new hire. It’s the team leader who talks too much because of his incessant need for attention. It’s the analyst whose deep insecurity keeps her from speaking up out of fear of being wrong. In each example, you can probably envision some of the consequences of that person’s failure to pay attention to what’s happening on the inside.

From Outreach Magazine  The Beginning of a New Era

THE INVISIBLE AND INTANGIBLE FORCES

Great leaders have unusual habits that create unusual behaviors. But these habits require self-leadership. You need to be intentional about moving counter to the ingrained, unhealthy habits you’ve formed. In some cases, you have to choose to do the opposite of what your intuition and instincts are telling you to do. For leaders who are used to “trusting their gut,” that can be a difficult lesson.

George Costanza had to learn this the hard way. In one of the greatest Seinfeld episodes ever aired, “The Opposite,” George realizes that every decision he has ever made has been wrong, and his life has become the exact opposite of what it should be. “It became very clear to me sitting out there today that every decision I’ve ever made, in my entire life, has been wrong. My life is the opposite of everything I want it to be. Every instinct I have, in every aspect of life, be it something to wear, something to eat … It’s all been wrong.”

The only way for George to see the results he wants to see is to intentionally do something radical—to choose the opposite of every impulse he would ever have going forward. It’s a hilarious idea, but sometimes George’s response is quite appropriate.

As a leader, I’ve found that the forces that keep me focused on external results are extremely powerful. Earlier we talked about the Axis of Distraction and the appearance of success, the allure of progress, and the attraction of certainty. Whatever you identify as a primary distraction in your life, whether it’s one of the Axis members or a smaller ally like social media or online shopping, consistently turning down the white noise in your life is going to require a radical shift in you and in the choices you make. You will need to learn new, noise-canceling habits. You will have to get rid of the internal distractions so you can focus on the external actions because great leaders make invisible decisions that lead to visible results.

As you get started on the road to emotional health and greater self-awareness, everything in you is going to want to focus on the visible results. You may be drawn to the things that others praise you for, the things that earn attaboys and congratulations for a job well done. But it’s the invisible habits of self-reflection, self-inspection and self-discovery that will allow you to develop into the leader you want to be.

I’ve seen my boss and mentor, Andy Stanley, carry out these habits with such regularity that I didn’t even notice he was doing it at first. But the longer I’ve worked for him, the more I’ve come to value the personal habits of growth and development behind his leadership and effectiveness. The constant temptation for leaders is to gain power, prestige and popularity, and then stop growing. Having arrived at the goal, they are no longer curious. They stop asking questions, sometimes to avoid the risk of having to change something or admit weakness. Every leader faces this temptation.

And that’s why I value what I’ve learned from working with Andy. He has that position of power, prestige and popularity in our broader organizational culture. He has what so many are searching for, yet he is still willing to look inward for the sake of self-discovery and self-evaluation. He is still, after all he has done and achieved, emotionally curious.

A few years ago, we had an extremely talented staff member leave to work at another church. Because loyalty is a highly elevated value in many churches, when a contributing member leaves, it is all too common for their departure to be seen as disloyal, even a betrayal of the mission. Good riddance. Don’t let the door hit you on the way out, describes the feeling some have when they leave. But that’s not how we do things. As an organization, we choose to celebrate people when they leave, or at the very least we try to fight against the hurt feelings that are all too natural in these situations.

About three months after this staff member left our church, he had a change of heart—a complete reversal. He came back to his manager with his tail tucked between his legs, asking if he could have his old job back. We had begun the process of hiring this person back when Andy heard the news. He immediately sent me a note and asked me to press pause until we had talked about rehiring this person. For Andy to dip into the organization at this level of decision-making was uncommon. Right away, I knew something bothered him about the idea of hiring this person back on staff.

Quite honestly, I was a little frustrated that he would involve himself in what I considered a mundane matter. This wasn’t something that would directly affect him, and I had to work hard not to take the bait on my negative emotions. I had to choose to believe instead that Andy had our best interests in mind. I took some time alone to work through my own emotions and finally was able to sit down with Andy to discuss the matter.

When we spoke, I could tell he had done a lot of personal inspection. He practices the habits of listening to, naming and questioning his emotions with great regularity and has a high level of self-awareness, and these “invisible” choices have clearly led to visible results over the years. So I wasn’t surprised that he had worked through his emotions.

Andy told me how he still hears the voices of his previous bosses in his head whenever someone leaves. “Wish them luck but keep moving forward, fixated on the future.” He recognized that every situation is different, and that just because someone leaves doesn’t mean we should avoid rehiring them. If the person is talented and left on a good note, there’s no reason we shouldn’t rehire them. Andy had a few specific questions about the situation, and then he gave us permission to move ahead with the hire. He was apologetic for the delay.

I was impressed that day because I saw firsthand how a great leader had made a series of invisible internal decisions, processing through his emotions and asking good questions of himself, to enable him to make wise external decisions. And I knew this was something he did regularly, on a daily basis, and it facilitated his personal development and growth.

Here is your warning. No one will praise you for making these invisible decisions. In fact, if you do carry out the habits correctly, others probably won’t even notice you’re practicing them. These are the behaviors and habits that will allow you to turn down the white noise on a regular basis and help you grow toward greater emotional health.