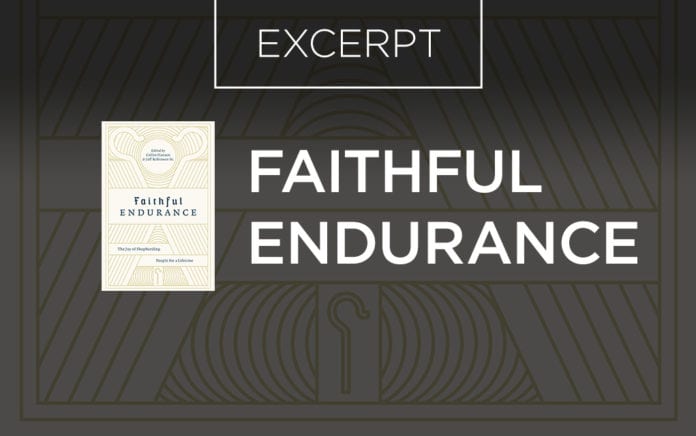 Excerpted From Chapter 1: “Ministry Has Left Me Spiritually Listless” by Timothy Keller Faithful Endurance Edited by Collin Hansen and Jeff Robinson Sr. Dear Pastor Tim (Keller), Last Sunday I was struck by Paul’s words in Philippians 4 that he had learned the secret to contentment. The Lord has given me a great place to […]

Last Sunday I was struck by Paul’s words in Philippians 4 that he had learned the secret to contentment. The Lord has given me a great place to serve, and I think it’s going reasonably well. I enjoy the deep study of Scripture that comes with preaching every week, and I probably spend at least 50 hours per week on church work.

I continue to grow in my knowledge of the things of God, but my devotional life is lifeless. I’m just not content. I fret a lot over things, especially whether the church is flourishing under my leadership, whether I’m working hard enough and whether I know enough. I’ll admit that though things are going well at the church, I’m not thrilled that other churches around us are growing while we seem to have plateaued. The church has done fairly well under my leadership, but to be frank, I expected more.

Yes, I realize I have much to be content over, but no amount of “success” ever seems to do it for me. Why am I feeling this way? What has left me feeling so listless, even subtly bitter?

I spent 42 years in ordained vocational ministry. Many who started with me didn’t get to the finish line. It’s a grievous percentage. One of the main reasons so many didn’t last, I think, is because no one warned them about the ways ministry can tempt one with pride.

This is where Paul’s words in 2 Corinthians 12:7–10 have been so helpful to me as a pastor. Paul—the very apostle trained in theology and for ministry by the actual risen Christ—warns us that theological training and life in ministry can lead to conceit if you fail to cooperate with Christ’s gracious intervention:

“So to keep me from becoming conceited because of the surpassing greatness of the revelations, a thorn was given me in the flesh, a messenger of Satan to harass me, to keep me from becoming conceited. Three times I pleaded with the Lord about this, that it should leave me. But he said to me, “My grace is sufficient for you, for my power is made perfect in weakness.” Therefore I will boast all the more gladly of my weaknesses, so that the power of Christ may rest upon me. For the sake of Christ, then, I am content with weaknesses, insults, hardships, persecutions and calamities. For when I am weak, then I am strong.”

Here are three ways ministry can make you conceited unless God intervenes. Be warned.

1. Theological Knowledge Can Puff You Up.

First, there’s the conceit of theological knowledge. Now you might think, It’s a stretch to say Paul is arguing that theological knowledge leads to conceit. But elsewhere he says, “We know that ‘We all possess knowledge.’ But knowledge puffs up while love builds up. Those who think they know something do not yet know as they ought to know” (1 Cor. 8:1–2).

In his exposition of Ephesians 6, I think the words of D. Martyn Lloyd-Jones are helpful:

“Whenever you allow your relationship to the truth to become purely theoretical and academic, you’re falling into the grip of Satan. …

“The moment in your study you cease to come under the power of the truth, you have become a victim of the Devil. If you can study the Bible without being searched and examined and humbled, without being lifted up and made to praise God, or moved with sorrow over what God has endured in you, or amazed at the beauty and wisdom of what Christ has done for you; if you do not feel as much of a desire to sing when you’re alone in your study as when you’re standing in the pulpit, you are in bad shape. And you should always feel something in this power.”

Lloyd-Jones proceeds to identify the marks of someone who has learned to master the Bible as a set of mere information, not extraordinary power. One mark is that you become a spiritual crank. A spiritual crank is someone always complaining about relatively fine shades of doctrinal distinctions, always denouncing others in arguments over Bible translations or denouncing people on the wrong side of the latest theological controversy. A spiritual crank treats the Word of God as something you use, not something that uses you. He’s puffed up on intellectual pride and his theological tribe.

2. Ministry Can Become a False Identity.

It can manifest itself in at least four ways:

2. Criticism: If your ministry becomes your false identity, you won’t be able to handle criticism. Criticism will come and be so traumatic, because it questions how good a pastor you are. Criticism says, “You know, your preaching really isn’t very good. I want my preacher to be better.” It feels like a personal attack. The criticism either devastates you, or you dismiss it and don’t grow from it.

3. Cowardice: If your ministry becomes your false identity, you will succumb to cowardice. There are two kinds of cowardice. There’s true cowardice—being afraid to rock the boat or to offend the people who give the most money to the church or to preach a word that turns young people off. That’s true cowardice. But there’s another kind of cowardice that I call “counterfeit” cowardice. This is the cowardice of being too abrasive, of being too harsh, of running people off and then saying, “See, I’m valiant for truth.” This also comes from identifying with your ministry.

4. Comparisons: One last sign that you’ve fallen into a false identity is that you cannot stand comparisons. You get envious when you see others succeeding because you don’t think they work as hard as you do or are not as theologically astute as you are. Everything is coming up roses for them in their ministry, and that bothers you.

From Outreach Magazine  Every Life Is Sacred

Pastor, there’s nothing worse than identifying with your ministry. And by the way, if you don’t think that’s going be a lifelong struggle, you don’t know your own heart.

3. Ministry Can Make You Outwardly Focused.

When you speak to people about God, you have two options: commune with God, or act like you commune with God. Since the minister’s job is to tell people how great God is and how wonderful the Christian life can be, his life needs to reflect it. So you either have to be close to God as you minister, or you have to act close to God. Either you truly learn how to commune with God, or you learn how to fake it: You talk as if you’re a lot closer to God than you actually are. And not only do people start to think that, but you start to think it too. This can be devastating for your heart. That’s what is so horribly dangerous about ministry.

On Jesus’ last night with the disciples, he said one of them would betray him (John 13:21). It’s interesting to consider how the disciples responded. They all looked around and asked who this person was. In fact, after Jesus told them that it was the one he would give bread to, they still didn’t get it. You know why? Because Judas didn’t look any different than they did. Outwardly, he was an effective minister, but inwardly, there was nothing there. He took care of his outward life more than his inward life. Jonathan Edwards, in his great book Charity and Its Fruits, talks about the fact that God used Judas even though he wasn’t saved. We don’t want that to be our legacy in ministry.

But here’s where hypocrisy starts. Ministry is either going to make you a far better Christian or a far worse Christian than you would have otherwise been. It’s going to make you a hard, pharisaical hypocrite, or it’s going to turn you into a softer, more tender person, because it forces you to go to the throne of grace and to beg the Lord for help in your weakness. The ministry will either drive you to him or drive you away from him. Like Judas, you choose what life you care for.

So how do we overcome these conceits? Remember Paul’s situation in 2 Corinthians. He’s facing false apostles and teachers who are saying he doesn’t have the credentials to be a true apostle. Paul counters that he does have the credentials—but not the kind we would expect. He inverts all the categories. Instead of boasting about his theological knowledge, great success or picture-perfect outward life; he boasts in insults, hardships and being run out of town on a rail.

This is how he contends that God is truly with him. He tells us to look at all the things God has done to bring him to his knees.

Pastor, consider all the things God has done to break your pride. Look at all the ways he has brought you to the end of yourself so that you would cling to him more tightly. Let all your failures and disappointments and weaknesses drive you like a nail into the love of God. Only by embracing them will you ever become a true minister and make it to the finish line.