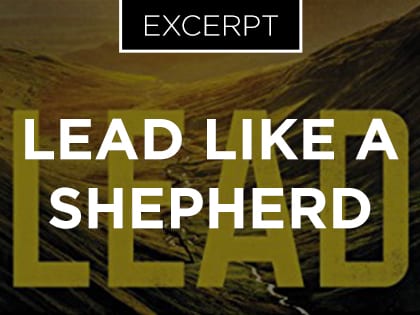 An essential role of a spiritual leader is adapting to the fears and weaknesses of their flock with compassion.

Excerpted from
Lead Like a Shepherd
By Larry Osborne

There are two sides to every coin.

In the last chapter we saw the importance of strong and forceful leadership—why we must be willing to make our flock do the right thing even when they don’t want to do it. But the other side of the shepherding coin is just as important. It’s the willingness to patiently adapt and adjust to the fears and weaknesses of the flock, to meet them where they are, not where they ought to be.

I’m always surprised at how many pastors and spiritual leaders seem to think that the forceful side of leadership is the only side and that acquiescing to the fears and weaknesses of their flock is a form of spiritual compromise.

He gave mercy to a woman caught in the act of adultery—not a woman who came forward to repent of her adultery. He told a parable about a tax collector being justified because he simply asked for mercy—not after he quit his job and cleaned up his act. He healed the son of a man with inadequate faith, and he was a friend of sinners, not just former sinners.

Yes, I know that Jesus told them to go and sin no more. But he didn’t wait for them to measure up before offering compassion and forgiveness. He went and met them in their sin and failure, called them to himself and then told them, “Go and sin no more.”

Once again, David’s portrayal of the Lord as our ideal shepherd in Psalm 23 speaks powerfully to the issue at hand. It shows us what it looks like to compassionately adapt and adjust to their fears and limitations.

But, unfortunately, our lack of familiarity with real sheep and real shepherds has caused many (if not most) of us to miss the obvious. David points out that along with making us lie down in green pastures, the Lord also “leads us beside quiet waters.”

From Outreach Magazine  Practicing Gratitude When You Don't Feel Like It

As I noted earlier, I used to picture the green pastures and quiet waters as a depiction of God’s lavish blessings and favor. I imagined a lush meadow with some trees and a stream running through it, a great place to read a book or take a nap. But that’s not what David had in mind. He wasn’t talking about the beauty of a lush meadow. He was describing an arduous task that a shepherd had to do daily.

Sheep need water. But they’re afraid of moderate to fast-moving streams. So a free-range shepherd had to make sure his sheep were always near water that was slow moving or dammed. And whenever there wasn’t any nearby, he had dam it himself. Otherwise the sheep wouldn’t drink.

Ironically, running water is purer and healthier. The faster the better. And unless we’re talking about genuine rapids, moving water presents no real danger to the sheep. Especially when their shepherd is standing nearby, staff in hand, ready to pluck out any who stumble or appear to be in danger of being washed downstream.

It must have been frustrating for a shepherd to constantly search for still water or have to dam up a portion of the stream when the only reason it was necessary was his flock’s stubborn refusal to drink from running water.

I would have been tempted to sit down and wait for them to get thirsty enough to drink anyway, much like I did when my kids refused to eat what Mom put before them. They had two choices: eat it or go to bed hungry. Problem solved.

But that’s not what a good shepherd does. He adapts to the weaknesses and limitations of his flock even when those fears and limitations are unfounded and frustrating. He knows his job is to keep them healthy and hydrated, no matter what it takes to get the job done.

Unfortunately, I find that many of us in positions of spiritual leadership are far too impatient, idealistic or lazy to do the kind of adapting and adjusting that a real shepherd like David did daily.

I speak at a lot of conferences. I’ve noticed that whenever a group of ministry leaders get together (especially professionals like pastors, missionaries and theology professors), there is a lot of talk and criticism of inwardly focused churches, consumer Christians, rampant spiritual immaturity and ministries that aren’t growing or multiplying fast enough.

But that’s all there is. A lot of talk and criticism directed at the sad state of the church and discipleship. Nothing more. Just talk.

These folks are what I call angry shepherds. They don’t love their flocks. They don’t even like them. They aren’t willing to lift a finger to help make it easier for folks to come to Jesus or less demanding to follow him. And they’re quick to accuse anyone who does so of selling out, watering down the gospel or failing to take the cost of discipleship seriously.

I get the strong impression they’d rather thin the herd than care for their sheep. They want a church full of special forces disciples and wish everyone else would stay away.

But angry shepherds, disgusted and dismayed by the shortcomings of their flock, don’t advance the cause of Jesus. They may think they’re helping out, but they’re not. In reality, they have far more in common with the Pharisees of Jesus’ day than the Great Shepherd in David’s psalm.