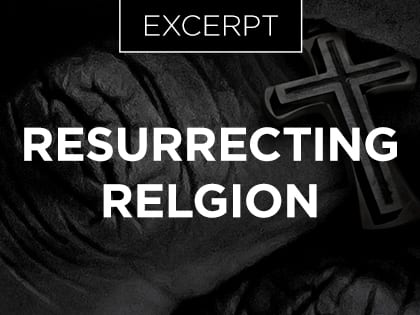 The difference between good and bad religion is fleshed out by the interactions between Jesus and the Pharisees and Sadducees. Here’s what we must learn from it.

The connection between inner, individual spiritual belief and outer, communal religion—the convictions that prompt a person to act consistently in certain ways with and toward other people—is precisely what the biblical writer James tried to describe and encourage.

The James who wrote the epistle that bears his name is thought not to have been one of the Sons of Thunder—the Zebedee brothers, James and John—who seem to have been pals and fishing partners of Peter. Neither is it likely that he was James, the son of Alphaeus, another of Jesus’ disciples. As with most books of the Bible, there’s a considerable range of argument about who did write the book, and when and where.

Most scholars go along with the earliest of the church fathers to weigh in on the matter, Origen and Eusebius, who lived about 150 years and 250 years, respectively, after the death of Jesus. They both attributed the book to the man the apostle Paul refers to in Galatians 1:19 as “James, the Lord’s brother.” The biological brother of Jesus, this James was the primary leader of the church in Jerusalem. If he was, in fact, the author of this letter, it must have been among the earliest of the New Testament books to have been written, probably even before the Gospels.

James was a man who had Jewish religion in his bones, and he knew just how dry and lifeless it could become. Still, it seems that he clung doggedly to the Hebrew traditions. He didn’t become a follower of his older brother until after Jesus’ death—in fact, it seems it took a personal visit from the resurrected one to convince him.

When we encounter him in the Acts of the Apostles or in the letters of Paul, he usually appears to be trying to steer a middle path between the law God gave to Moses and the revelations that have been coming fast and furious to the followers of Jesus—notably, Peter and Paul. He carefully compares this new perspective with Old Testament Scripture, and from the synthesis, delivers measured direction. Possibly the most conservative of the first generation of church leaders and missionaries, he understands that the Old Testament has not become worthless; it should form a foundation for, without constricting, this new movement of the Spirit of God.

The link between the two is his own brother, Jesus. His death and resurrection certainly changed everything, unveiling an entirely new spiritual reality, a radically different mode of relationship between God and humanity. But his life and teaching are critical elements in the link, too—the “other shoe.”

From Outreach Magazine  The Power of Hospitality

I believe that James is trying to articulate what, to him and others of his era, was a new religion, the religion of Jesus—how what Jesus believed manifested itself in the way he interacted with other individuals and society at large. He is struggling to integrate what Jesus taught, and how he lived, into his own understanding and practice of the law. After all, Jesus had said that he hadn’t come to do away with the law, but to fulfill it.

“Fulfill” it? To bring to fullness or completion. What could that mean? Not the same thing as merely keeping the law, that seems clear.

Because keeping the Commandments had long since devolved into most of the things we decry as bad or false religion. Jesus had repeatedly shone a light into the cavernous warehouses of Pharisee and Sadducee religions, and he revealed that they were empty. A spiritual void. Elaborate form, but no content.

Over and over, the Pharisees got all in a twist about Jesus healing people on the Sabbath. They were so bent on keeping their religious rules that they actually resented a blind man’s sight being restored or a lame man’s legs being straightened and strengthened. Healing someone, in their view, was too much like work! How blind and petty is that?

In their view, keeping the religious rules was an end in itself. So determined were they to do so that they sucked every bit of life out of the special relationship they were supposed to have with God and clean forgot that the “rules” were supposed to serve them. “The Sabbath was made for man,” Jesus had to remind them, “not man for the Sabbath.”

The Sadducees, on the other hand, didn’t care so much about behavior. It was the dogma that concerned them most.

“The Sadducees, who say there is no resurrection, came to him [Jesus] with a question.‘Teacher,’ they said,‘Moses wrote for us that if a man’s brother dies and leaves a wife but no children, the man must marry the widow and raise up offspring for his brother. Now there were seven brothers.’”

They went on to spin a ridiculous story about an impossibly complicated situation in an effort to prove that the concept of resurrection was, itself, ridiculous. What seemed to be most important to them was proving their point—being intellectually superior. Maybe there was the added bonus of knowing that, if there was no resurrection, there would be no repercussions, after death, regarding what they chose to do in life.

From Outreach Magazine  8 Systems That Are Crucial to Church Health

Both parties, Pharisees and Sadducees—the conservatives and the liberals, you might say—were so greedy for money and power that, in the end, they were willing to lie, bribe, threaten and murder in order to protect their hegemony.

Whatever “fulfilling the law” might mean, that definitely wasn’t it.

Perhaps, in part, James was remembering the blabbermouth religiosity of those two groups when he wrote,

“Those who consider themselves religious and yet do not keep a tight rein on their tongues deceive themselves, and their religion is worthless. Religion that God our Father accepts as pure and faultless is this: to look after orphans and widows in their distress and to keep oneself from being polluted by the world.“

From chapter four onward, we’ll begin to look in detail at the kind of integrated spiritual and religious life—faith and works—that James was trying to describe. We’ll find that he gives very practical, pragmatic instruction about how to live out what Jesus taught. He certainly doesn’t want it to become empty words or rote ritual, the kind of religion he describes above as “worthless.” But he does want these Christians, these followers of the Way, to have some skin in the game.

But it’s clear from that same passage, isn’t it, that James believes true religion, religion that is “pure and faultless,” is both vital and very doable? That, in fact, it’s what God wants from us?

We’ve looked at what we understand the word religion to mean in contemporary terms and (perhaps reluctantly) concluded that if we are going to have a relationship with God, a spirituality that is at all real and lively, we’re also going to be positively religious. That is, we’re going to be engaging the world around us in a constructive, fruitful way that accurately expresses our personal relationships with God. Living out, publicly and communally, what we believe privately and individually. And when we put it like that, “religion” doesn’t sound so bad!