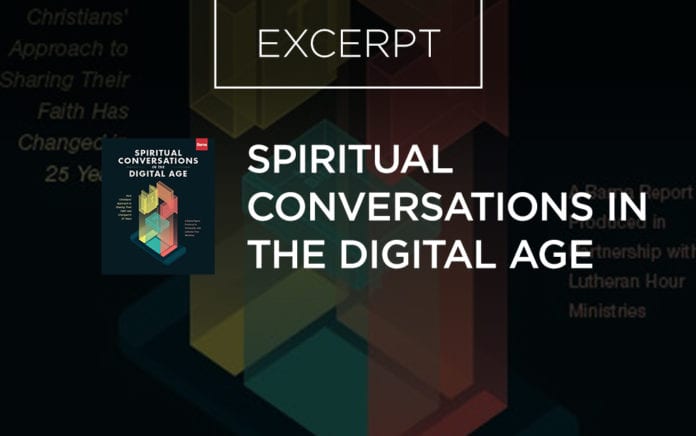 Barna: Three-quarters of self-identified U.S. Christians have fewer than 10 spiritual conversations a year.

Adapted From
Spiritual Conversations in the Digital Age

When was the last time you had a conversation about God?

In a recent Barna study, done in partnership with Lutheran Hour Ministries, we discovered that fewer than 1 in 10 Americans talks about God, faith, religion or spirituality even once a week (8 percent)—and only an additional 15 percent do so once a month. In fact, the average adult says they only have about one spiritual conversation a year. Okay, you say, that’s low … but that’s among all Americans. What about among Christians? Surely the people of God are talking about faith regularly?

The answer, unfortunately and surprisingly, is not really. Three-quarters of self-identified U.S. Christians have fewer than 10 spiritual conversations a year. In other words, for most Christians in the U.S., topics of faith come up less than once a month.

As spiritual leaders and practitioners, whose job it is to think and talk about matters of faith, it’s easy to imagine everyone is regularly doing the same. After all, aren’t these the big questions of life? Don’t these topics matter more than anything else?

The truth is, most Christians are busy with other things: the day-to-day of normal life—jobs, kids, budgets, sports, weather and what’s premiering on Netflix this week. None of this is bad, but the unfortunate reality is that most adults don’t seem to connect their everyday experiences with their faith. Or, at least, they aren’t talking about it if they do.

So what’s happening here? Why are Christians so reluctant to talk about their faith?

In this Barna study, explored at length in the book Spiritual Conversations in the Digital Age, Barna took a look at who is talking about faith and who isn’t—and what it might take to transform these reluctant conversationalists into eager ones.

People who don’t talk very often about faith offer different reasons, but most of these fall into two broad categories: avoidance and ambivalence. For instance, among the top four responses given for not engaging in conversations are two that are avoidant: “Religious conversations always seem to create tension or arguments” (28 percent) and “I’m put off by how religion has been politicized” (17 percent). The other two responses indicate ambivalence: “I’m not religious and don’t care about these kinds of topics” (23 percent) and “I don’t feel like I know enough to talk about religious or spiritual topics” (17 percent). Here’s the full list of options:

• They are more committed to spiritual practices and have a deep commitment to their faith (for example, 64 percent of these eager conversationalists read their Bible each week, compared to 41 percent of more reluctant conversationalists).
• They take personal responsibility for sharing their faith and express confidence in doing so (65 percent feel they are definitely qualified to share their faith, compared to 40 percent of other Christians).
• They are intentional about starting conversations and ready to engage when asked.
• They’ve had positive experiences when sharing their faith—many expressed feeling joy and peace when talking about their faith and nearly half (47 percent) say someone came to faith as a result of a conversation they had with that person.

There is much to unpack in this study and plenty of implications for how we can encourage more and better spiritual conversations. But perhaps the most potent finding is this: The less people think about God, the less they talk about God.

And, simply put, people are thinking about God less and less.

The decline in spiritual conversations evident in this report tracks with an overall decline in religious belief and practice in America, which Barna has studied for more than three decades.

It may sound dire, but there is also good news: The more people think about God, the more they want to talk about God, about their beliefs and about their faith experiences. Active and engaged Christians remain eager to discuss spiritual matters, even as society around them grows increasingly reluctant to do so.

It is good news that spiritual conversations are a natural byproduct of spiritual practices. When a nominal Christian is transformed into an active disciple, they start talking. People whose lives are changed by God and who daily interact with him are excited to share their hope with others. This can make them incredibly powerful witnesses in a time when transcendent hope seems hard to come by.

This brings to mind some familiar verses that Christians often reference when talking about faith conversations: “If someone asks about your hope as a believer, always be ready to explain it. But do this in a gentle and respectful way” (1 Peter 3:15–16).

We tend to focus our reading of this command on the word explain instead of on the word ask. We prioritize giving would-be evangelists information to help them accurately and clearly explain Christian doctrine, rather than equipping them as hope-filled disciples to be gentle and respectful. In our always-connected culture, however, information is cheap. Hope, on the other hand, is a hard-to-find treasure.

With that in mind, maybe we should give a greater part of our attention to living more deeply into Christian hope. Perhaps more people would ask us about it, and we’d be more eager to tell them about it when they do.

The primary source of data in this report is a survey of 1,714 U.S. adults, com-prised of an over-sample of 535 Millennials and 689 practicing Christians, conducted online June 22–July 13, 2017. Respondents were recruited from a national consumer panel, and minimal weighting was applied to ensure representation of certain demographic factors, such as age, gender, ethnicity and region. The sample error for this data is plus or minus 2.2 percent at the 95 percent confidence level for the total sample.