Home Resources Books Approaching the Doors in Our Lives 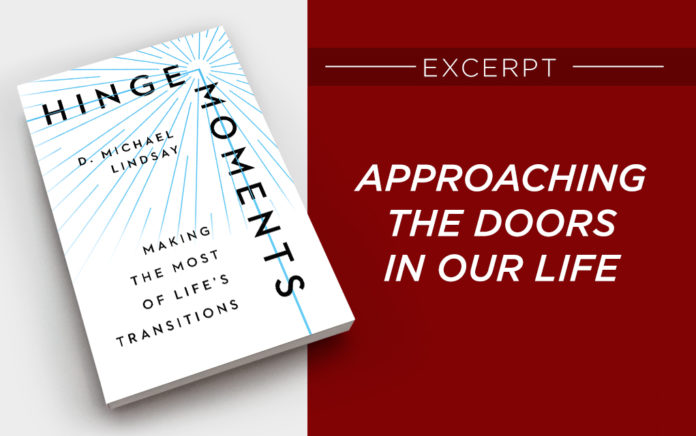 At root, change means the partial or total abandonment of the norms, safeties and patterns of behavior that make our lives manageable. Decision-making is mentally taxing, so we tend to replace assessments and evaluations with automatic reactions and instinctive habits whenever we can. Change entails losing familiar crutches that we lean on. If every day were our first day on the job, or if every time we drove to work, we had to concentrate on the map directing our travel, we would eventually wear out. This is also why vacations to new places, especially international ones, can be exhausting, even if they are a pleasure. The human endocrine system produces adrenaline, which gives us extra energy and focus on these “first day” or “first time” events. But the body cannot tolerate a steady supply of adrenaline. This is what causes hypertension and heart palpitations. Eventually, we move to a more stable state, but before then we must pass through the anticipation phase of transitions.

SYSTEM ONE AND SYSTEM TWO

The preference for the easily navigated, familiar environment is explained by the difference between our two modes of thinking, which behavioral economist Daniel Kahneman has called “System 1” and “System 2.” System 1 is automatic, subconscious, and takes little to no effort to use. It is, for instance, used for identifying the location of sounds, or deciding which of two objects is closer to us. If I asked you what one plus two equals, you would only need System 1 to arrive at the correct answer.

System 2 is very different. It is the process by which we think slowly and deliberately to calculate and produce answers to difficult questions. Any response that is not automatic makes use of System 2. Focusing on a project at work or remembering where we first met someone require System 2 thinking because they entail the processing of information that is not immediately known. If I were to ask you to solve for x: 1,389 = 237x, you would likely be able to give me an answer after some time, but it would require effortful calculation.

From Outreach Magazine  America Goes Back to Church En Masse

System 1 exists to make our lives easier and more manageable. We coast through much of our day with System 1’s automatic responses to known questions. It forms the mental shortcuts that help us get along without much effort. It allows us to ration our mental energy so we can save it for the more taxing questions as they come along.

When the automation of System 1 is lost because of changes in our lives, it is replaced by System 2. This is the case even for small changes. I once asked a student who worked in my office what he considered the hardest thing about moving to college. His answer surprised me: “Having to pick what to wear each morning.” He had come from a school that required a uniform every day; he had never needed to think about what he would wear or try to remember how long it had been since he had worn a particular outfit. The burden of choosing what to wear each day is a minor issue, but it demonstrates a larger point: all environmental changes, no matter how small, entail a transfer of responsibilities from System 1 to System 2. A complete change of environment (like going to college) is so difficult because little can be done without System 2 thinking. In your first week of classes, you have to actively remind yourself of when your classes are, where they meet, and the names of your professors. On top of that, you have to present yourself in socially acceptable ways to myriad new acquaintances. Until all this becomes routine, it demands additional mental energy. The same applies when we start a new job. Remembering all our coworkers’ names is mentally taxing until it no longer is.

This is why change hurts your head. The option to relax a little and fall back on default actions is not available because in transitions there are no default actions yet—not until we establish our new patterns and ways of life.

By nature, we humans are risk averse. The unknown makes us wary, not only because we want to avoid using too much System 2 but also because we don’t want to die while doing it. Our earliest ancestors stuck to the paths they knew and stayed in a group rather than wandering around and getting eaten. Those who were more curious than cautious did not live long enough to become our ancestors.

A moderate dose of caution is healthy as a survival mechanism, but too much can keep us from successfully passing through open doors. I remember a conversation I had with Tom Tierney on this subject. Tom is the founder of the Bridgespan Group, an industry-leading firm that specializes in nonprofit consulting. Bridgespan exists to help people help others by maximizing the positive social impact of nonprofit organizations. Tom himself was leading a successful life in the private sector before he began the more civic-minded Bridgespan. He credits much of his success now to an early hinge moment in his life when he decided to check his caution and take a healthy risk.

When he was applying for a job right out of college in California, he did not even own a suit jacket for the interview. After a few minutes, his interviewer told him that they would like to offer him a job … in Algeria. Tom did not even know where Algeria was, but he was excited by the new venture, so he took the job. The experience and the people he met working in Algeria for two years in his early twenties permanently altered his trajectory for the better. It takes a lot of willpower to overcome the natural caution you might feel at the prospect of moving across the world for an entry-level job. At first glance, that move might come across as foolhardy. However, taking risks like that (especially in your younger years) can be instrumental in determining your future. Hesitation at the prospect of major life transitions is normal, and wisdom should always prevail. But the data suggests that we humans may be overly cautious—to our detriment.