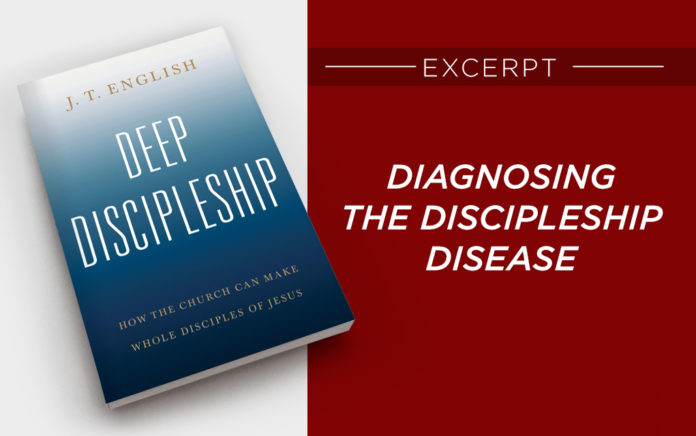 The local church has a discipleship disease. And without the proper diagnosis and treatment plan, we will do more harm than good.

Over the past several decades the Western church has noticed alarming symptoms of our discipleship disease. Some of these symptoms include people leaving the church, students dropping out of church after high school, attendance dropping, and perhaps most importantly a lack of seriousness among our people about what it really means to be a follower of Christ. From an examination of these symptoms, we’ve come to think our disease is that the church has become increasingly irrelevant and requires too much from people who want to get involved. We see that we are losing market share in the world of ideas and in the rhythms of people’s everyday lives.

Many seem to think our disease is that we’ve gotten too deep.

In order to treat this disease, we have sought to develop ministry strategies that require less of people, not more, strategies that focus on keeping disciples in the church rather than growing disciples in the church, and that view the pastor more as a marketer than a minister. We are on our heels and we just want the bleeding to stop, so we have lowered the bar, and we have settled for a lowest common denominator discipleship.

Unfortunately, I believe many of us have misdiagnosed the disease and are mistreating the church.

From Outreach Magazine  Winfield Bevins: Marks of a Movement

People are leaving the church, not because we have asked too much of them, but because we have not asked enough of them. We are giving people a shallow and generic spirituality when we need to give them distinctive Christianity. We have tried to treat our discipleship disease by appealing to the lowest common denominator, oversimplifying discipleship, and taking the edges off what it means to follow Christ.

Put simply, we have settled for a shallow approach to discipleship, believing that breadth will lead to depth. We have adopted philosophies of ministry that focus on growing crowds instead of growing Christians. We have asked our pastors to be marketers, not ministers of the gospel. In the church we focus on keeping people, but if they want to grow, they have to go outside the church. We think about how to keep people, rather than how to form people. I believe that it is time for the church to ask some serious questions about our shared disease, and how we can begin to create depth that might lead to breadth. Perhaps the church should start thinking about what it means to go deeper with fewer, instead of going wider with the many. What if our cultural moment is inviting the church to embody the depth and substance of the Christian faith, not a shallow spirituality that appeals to the masses?

From Outreach Magazine  How to Lose 7 Million People