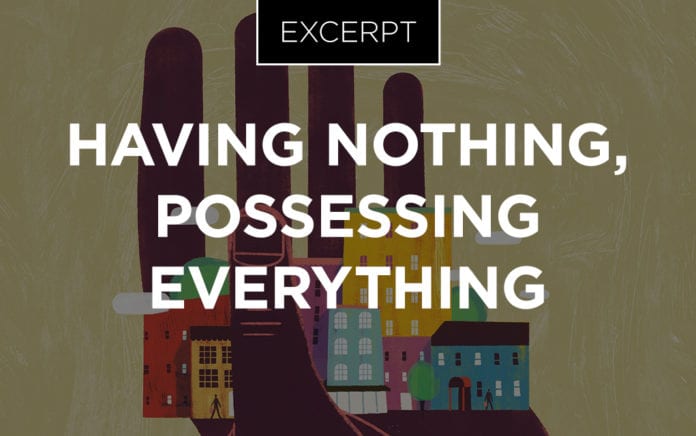 When we began to focus on people’s gifts rather than their needs, it was a game changer.

Excerpted From
Having Nothing, Possessing Everything
By Mike Mather

What Is Hidden in Plain Sight

At the beginning of 1992, my bishop appointed me to a church in South Bend, and I left Indianapolis. I moved to a very small congregation, but we did have a food pantry. We were known as the “social-service church” in our low-income neighborhood. When people came to the pantry, they were required to fill out a government form, because we received government surplus food. The form asked for their name, address, income and expenses.

In worship on Pentecost Sunday that June, we read the passage from Acts 2 where Peter is preaching from the prophet Joel. Joel shares this word from God: “I will pour out my Spirit upon all flesh.” After worship, around the table at the Sunday community dinner, we were talking about Joel’s testimony, and an insightful woman said to me, “If what Joel said is true, why don’t we treat people like that?” I asked what she meant, and she continued, “When people come to the food pantry, we ask people how poor they are rather than how rich they are. Peter is saying all people have God’s Spirit poured into them.”

I stopped. I didn’t know what to say. Shamed, I whispered, “You’re right.” We were actually working against our beliefs. We say in worship that “God’s Spirit flows down on everyone,” and then we act like it isn’t true.

That woman’s question got me thinking about something called Asset-Based Community Development (ABCD). John McKnight and Jody Kretzmann, cofounders of ABCD, proposed that when working with low-income citizens, you ought to begin by focusing on the gifts of the community rather than starting with what the community lacks. Specifically, McKnight and Kretzmann urged communities—both the “helpers” and the ones “receiving help”—to notice the gifts of individuals, the gifts of associations and the gifts of institutions.

McKnight’s The Future of Low-Income Communities and the People Who Reside There included a questionnaire designed to tease out people’s individual gifts, and when our Pentecost Bible study shined a bright light on our church’s failure to receive people as the gifts they are, I recalled the questionnaire. This led to an important change in how we interacted with the people who came to our food pantry. Now we began with those questions. We asked whether folks took care of children or elders, and whether they did it with their family or as part of a job or to help out a neighbor. We asked whether people could put up drywall or fix a toaster or knew how to drive a car. “Do you play a musical instrument?” we asked. “Do you garden?” If so, “Do you grow vegetables, flowers or both?”

And each interviewer asked three more questions at the end of the survey:

We asked the last question because when people came to the pantry, they seemed to be feeling isolated and alone. People often answered that question with some version of “There’s no one.”

The interviewer followed up such an answer by asking, “Who celebrated your last birthday with you?” And as people named folks, they began to sit up and you could see light come into their eyes. People remembered they weren’t alone.

One of the first people who came to the food pantry after we began using this questionnaire was a neighbor, Adele Almaguer. Three generations of her family were living in her home, and she was working part-time at the University of Notre Dame as a cook. She told us she was a good cook, and we said, “Prove it.” When she asked what we meant, we asked her to cook lunch one day for the custodian, the secretary and the pastor (me). The lunch she prepared was fabulous.

Shortly after that, we heard that the leaders of the neighborhood organization were planning to meet at a restaurant. The church secretary told them, “Don’t do that. Meet here at the church, and let Adele cook for you.” They did, and they paid her for the meal. Over the next nine months, Adele catered three events in the neighborhood. Studebaker Elementary was holding a parent-teacher meeting, and she cooked for it. The Southeast Side Neighborhood Health Center held an open house, and she provided the food. Memorial Hospital held a press conference in our neighborhood, and she served refreshments to the reporters.

Then the Chamber of Commerce contacted us. They wanted to have an all-day meeting of their leadership group in our church building. Since they were going to be there all day, they wanted to use the kitchen. We told them they could, but that we preferred they use our caterer. And they agreed.

From Outreach Magazine  What It Means to Be Salt and Light

We took twenty dollars (our only investment) and bought Adele a thousand business cards that said “La Chaparrita Catering: Spunky Tex-Mex Food.” When she fed seventy of the business and civic leaders in the community, she put those cards to good use. She also got connected to the Michiana Business Women’s Association, and a year and a half later she opened Adelita’s Fajitas at the corner of 8th and Harrison in Elkhart, Indiana.

If we had asked Adele how poor she was, we would all have ended up poorer for it. We would also have missed a lot of great food. Adele taught us that if we asked different questions, we would discover a world of gifts we didn’t know existed in people’s lives, and we would see different results. If we began looking for people’s gifts rather than people’s needs, then even better things than we thought possible might materialize.

I had stumbled into an awakening. A revelation. We hadn’t created anything. We hadn’t taught Adele how to cook. She knew how to cook. We hadn’t given her “life skills.” She already had those. What we did was invest in her. We paid for her to share her gift, and then we found others who were looking for someone with that gift. We were practicing the theology of abundance by looking for and naming the gifts of people who are thought of as poor and needy. Throughout the Gospels, Jesus proclaims good news to the poor. Likewise, our telling people who thought they had nothing to offer that they had gifts was indeed good news. And very effective.

If Adele had shown up two weeks earlier, we would never have asked her about her giftedness. The gift would have been there, but we would have missed it. We began to think that building on the gifts of people rather than filling their needs could hold the key to changing the odds for everyone.

Excerpted from Having Nothing, Possessing Everything by Mike Mather. Wm. B. Eerdmans Publishing Co. Copyright 2018. Used by permission.