Home Resources Books Positive Thinking As a Response to God 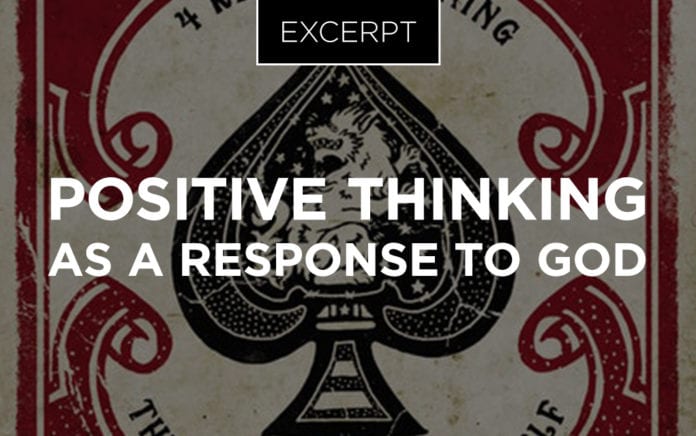 Excerpted From I Declare War By Levi Lusko I have known a lot of people in the church who sneer at the idea of positive thinking, as though it were somehow a betrayal of the gospel. It seems to be one of those things some Christians love to bash (along with psychology, secular music and […]

Excerpted From
I Declare War
By Levi Lusko

I have known a lot of people in the church who sneer at the idea of positive thinking, as though it were somehow a betrayal of the gospel. It seems to be one of those things some Christians love to bash (along with psychology, secular music and evolution).

A while back I realized that, almost without fail, those who are quick to look down their noses at the power of positive thinking and view it as a carnal and unspiritual thing also happen to be pretty negative people. This much I know for sure: The more I’ve paid attention to the “polarity” of my mind, the more I’ve liked the direction of my life.

Don’t misunderstand me: I don’t believe in positive thinking as a replacement for God, but as a response to God. My goal isn’t that you would see your metaphorical cup as half full; I want you to see it as constantly overflowing! What is faith if not a filter that allows you to process your experiences through the goodness of God, choosing to reject what you see and clinging to what you trust he is doing? Faith allows you to believe your beliefs and doubt your doubts.

Is it possible to replace Jesus with positivity? Yes. But everything that makes your soul better carries that danger. You can do church without Jesus. You can pray without praying. You can give all you have to the poor and have it count for nothing.

Just because something can be done the wrong way doesn’t mean it isn’t ever right.

Positive thinking isn’t evil; in fact, you will see just the opposite in Scripture. It’s not offensive to God; it’s obedience to him. The shortest verse in the Bible makes that crystal clear: “Rejoice always” (1 Thess. 5:16).

From Outreach Magazine  Hope for the Scrappy Church

Wait a minute, you might be thinking, especially if you grew up in church and did Bible sword drills like I did at Vacation Bible School. The shortest verse in the Bible is John 11:35: “Jesus wept!” That’s only nine letters, compared to the thirteen letters in the verse from 1 Thessalonians.

That’s true—in English. But the Bible wasn’t written in English. It was written in Hebrew, Greek and Aramaic. And in the original Greek, “Jesus wept” is sixteen characters, and “Rejoice always” is only fourteen, making it the shortest verse.

But don’t let its size fool you; this little guy packs a punch.

It is both powerful and challenging.

Personally, I think that this tiny, little, two-word-long verse is one of the most difficult things we are told to do in all of Scripture. Rejoice always? Think about that—not some of the time or when things are going great, but always.

Paul tells us specifically that ever-present joy is a part of God’s plan for our lives: “Rejoice always, pray without ceasing, in everything give thanks; for this is the will of God in Christ Jesus for you” (1 Thess. 5:16–18).

Why is it important to God that you rejoice all the time, pray frequently and stay thankful? Because it is impossible to do those things and be negative at the same time. When you feel like complaining, see yourself acting selfishly or find yourself slipping into a bad mood, shoot a prayer to God that is full of joy and gratitude instead. Setting your mind on things above you is declaring war on low-level thinking.

The fact that it is God’s will for you that you to be positive doesn’t make it easy. It was such a struggle for me when I was young that my dad nicknamed me “Mr. Negative.” Having a negative mindset was responsible for so much of the moodiness I experienced in high school, and to this day, it’s still a battle for me to be positive.

Excerpted from I Declare War by Levi Lusko © 2018. Used by Permission of Thomas Nelson. IDeclareWarBook.com