Home Resources Books What to Do While We Wait on God 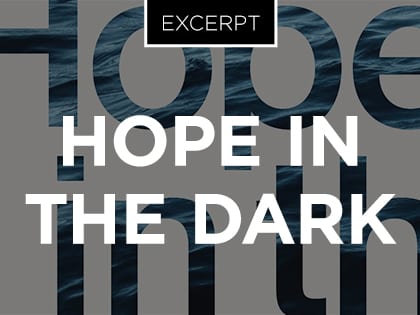 Even while we wait on God to fulfill his promises, he still asks us to continue to serve him faithfully.

Excerpted from
Hope in the Dark
By Craig Groeschel

“Teach us, O Lord, the disciplines of patience, for to wait is often harder than to work.”
—Peter Marshall

With 4G technology for our smartphones, nanosecond internet access, and same-day delivery service from many major retailers, it’s harder than ever to wait. Most of us don’t have to wait very long for anything anymore. Just think about how antsy you feel when the dentist is running behind schedule and you’re forced to play three more games of whatever you’re playing on your mobile device. Drives you crazy, doesn’t it?

Apparently, Habakkuk wasn’t crazy about waiting either. Nonetheless, he knew that was the third thing he had to do if he was going to make it out of the valley of despondency. God told him, “The revelation awaits an appointed time; it speaks of the end and will not prove false. Though it linger, wait for it; it will certainly come and will not delay” (Hab. 2:3). The Hebrew word here for “appointed time” is mow’ed, which means the right time, the affixed time, the divinely chosen time that God permits something to happen. There’s an old saying that God is rarely early, never late, and always right on time. That’s summed up by mow’ed.

When a woman is pregnant, she carries the child for about nine months, until her mow’ed for giving birth. And believe me, when it’s time for that baby to come, it’s time, and nothing is going to hold it back. I know firsthand. When Anna, our third child, was born, we were waiting for the obstetrician to arrive when Amy looked at me between contractions and said, “The baby’s coming!”

I thought I should reassure her to just hang on. “I know, honey.”

Sure enough, I had to deliver our daughter. Her head came out, so I cradled it, and then the next thing I knew, I was diving low to catch her like a ground ball. I’d pat myself on the back as a hero, but right as she was coming out, I panicked and dropped her on the bed. Granted, it was only about a two-inch drop. But I couldn’t take the pressure, and I let go. Part of me was proud that I didn’t pass out. But the other part will never live down dropping my daughter.

It was just her time. There was nothing I could do to delay her arrival until the doctor could get there. When it’s the mow’ed, there’s nothing you or anyone else can do to speed it up or slow it down. It’s going to happen, and happen on God’s timetable.

Until then there’s nothing you can do but wait and be ready.

From Outreach Magazine  Jemar Tisby: The Color of Compromise

Maybe you’ve been praying for what seems like forever for someone you love to come to Christ. But the harder you pray, the farther they seem to wander from God. So you wait. You might be asking God for another kind of miracle: for someone to be healed, for someone to be freed from an addiction, for a promotion, or a spouse. So you pray. You wait. Then you wait some more. Perhaps you’re brokenhearted about a rebellious child. You’ve done everything you know to do to help bring them back. You’ve read books. You’ve threatened. You’ve shown grace. And you’ve believed until you don’t know if you can believe anymore. So you do more of what you’ve already been doing:

When you feel like your faith tank is about to run dry, remember this: When God has promised something, it will come to pass. But it will be his timing, not yours. For whatever it’s worth, you’re not alone. Part of every believer’s maturity involves waiting on God and waiting for his promises to be fulfilled. When you look through Scripture, you’ll see example after example after example of people who are chosen by God, close to him, who still find themselves waiting. God promised them something, but then they had to wait for it. Let’s look at just a few of them.

God told Moses, “I’m going to use you to deliver my people and rebuild the nation of Israel.” Then Moses went on a forty-year road trip. Forty years! So much happened so fast with the exodus from Egypt—plagues and the first Passover and rushing out the door and strolling through the middle of the Red Sea before it closed up and drowned Pharaoh’s army.

But then, after such a dramatic exit—and after many generations of slavery in Egypt, almost four hundred years—it wasn’t surprising that the Israelites were eager to get to their new home. They probably thought it would take them a while to get there. A few weeks. Maybe a month or two. But forty years? That’s how long it took, but God kept his promise. He led them to the promised land.

Or how about Joseph? You know, the guy with the rainbow coat? God told him, “You’re going to be a great leader, over all your brothers and the entire nation.” So what happens? His brothers throw him into a pit. Sell him into slavery. And then Joseph, falsely accused by his master’s wife, is sent to prison. It was years before God finally fulfilled the promise, elevating him to second in command over all of Egypt. That’s a long time to wait.

Now, here’s one of my favorites. The apostle Paul has a vision and meets Christ. He’s transformed and says, “I’m called to preach. That’s what I’m here to do. This is all. I am compelled to preach the gospel. This is my God-given, singular purpose in life.” And then he waits. Thirteen years pass before that purpose begins. Thirteen years before he gets to preach his very first message!

Some seasons in life, you just wait.

What do you do while you’re waiting? A lot of people think of it like being in traffic or being in line at the grocery store. “Okay, I’m stuck here. I’m just going to have to wait this out. There’s nothing I can do.”

But the truth is, there’s plenty to do!

What does a waiter do? They wait on customers who need to be served a meal. We should do the same thing. When we’re waiting, we should be serving God the entire time. We’re not just sitting around, waiting for something to happen.

Waiting on him doesn’t mean there’s no movement. In fact, there may be more movement when you’re waiting than ever before.

The Bible tells us, “Whatever you do, whether in word or deed, do it all in the name of the Lord Jesus” (Col. 3:17). So even when we don’t understand what God is up to and why we’re having to go through the valley we’re in, we continue to serve him and do what we know needs doing as we wait. I know: that’s harder than it sounds, especially when you’re drowning in a wellspring of hard times and painful emotions.

And that’s where faith comes in.

Tell me more about this book »
Order this book from Amazon.com »
Read about Craig Groeschel’s 5 Must-Hear Podcasts »