Home Resources Books What Is the Gospel in Jesus’ Own Words? 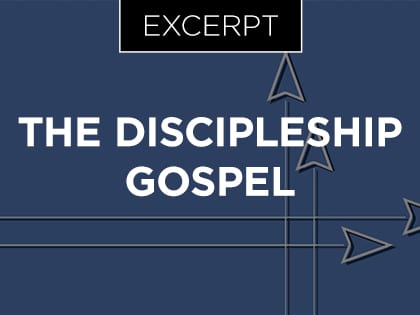 The gospel has seven essential elements laid out most clearly in the words of Jesus in Mark’s Gospel.

Excerpted from
The Discipleship Gospel
By Bill Hull and Ben Sobels

THE ESSENTIAL ELEMENTS OF JESUS’ GOSPEL

When we speak of the gospel that Jesus preached, it’s critical that we examine the New Testament Gospels. Matthew, Mark, Luke and John are inspired records that reveal Jesus’ gospel to us. While you could use any of the four Gospels, we have chosen to primarily use Mark’s account for the purposes of this book because biblical scholars generally accept that Mark wrote his Gospel before the others, giving us the first written record of Jesus’ life and teachings. Another reason, and more to the point, is that Mark’s Gospel clearly reveals Jesus’ gospel in two specific passages: Mark 1:14–17 and Mark 8:27–31.

Jesus’ own words in these Scriptures make it clear that there are seven essential elements of his gospel: four declarative statements, which form what we might say is technically “the gospel proper,” and three imperative responses. Each of the seven elements is not only deeply embedded with discipleship; they also call us to it. In this chapter, we’re examining several passages to discover these seven essential elements.

THE WORD ‘GOSPEL’ ITSELF

Before we begin unpacking each of the elements, we need to lay a foundation by addressing several matters that will help us create categories and language that breed clarity. Let’s begin with the word “gospel” itself because its meaning is extremely informative in our quest to define Jesus’ gospel.

The English word “gospel” finds its origins in the Greek word euangelion, which literally means “good news.” In ancient times, euangelion was used to describe an announcement of victory or celebration heralded through the streets for all to hear. As such, the ancient idea of gospel, or good news, is a declaration (Ps. 96:2–3). This helps us make sense of why insightful New Testament scholars like Scot McKnight speak of the gospel as being “a narrative declaration” about Jesus. (We’ll get into what “narrative declaration” means below when we define the discipleship gospel.) Correctly understood, the gospel is a Scripture-based declaration about Jesus—who Jesus is, what he has done, how he fulfills all Scripture and how he calls us to respond to him.

The gospel’s declaration and our responses to it are like a wedding ceremony. The pastor makes declarative statements about what the couple is doing, and by responding to what he says, they enter into the covenant of marriage. When was the last time you went to a wedding and the bride and groom refused to answer the pastor’s questions? Jesus calls us to respond just like a pastor expects the bride and groom to respond at a wedding ceremony. Unless we respond to the Good News, we haven’t accepted it. We emphasize this point because there is a trend in the postmodern age to put the Good News before people in a very attractive package without calling upon them to act on it. There seems to be a fear of putting anyone on the spot. This, of course, doesn’t work because it’s impossible to have a gospel without a call to action.

With these things in mind, let’s unpack these two aspects of Jesus’ gospel by looking at the four declarative statements of the gospel (the gospel proper) and the three gospel imperatives that go with it.

In Mark 1:14–17, we see Jesus begin to proclaim the gospel with one declarative statement of the gospel along with the three imperative responses. This brief passage is extremely important for understanding Jesus’ gospel because it’s rare to find such specificity in the four Gospels. Generally, the Gospel writers tell us that Jesus preached, not what he actually said. For example, Luke 20:1 says, “Jesus was teaching the people in the temple and preaching the gospel,” which tells us that he preached but not what he said. In Mark 1:14–17, we’re told what Jesus actually said when he preached the gospel. Pay careful attention to his words:

“Now after John was arrested, Jesus came into Galilee, proclaiming the gospel of God, and saying, ‘The time is fulfilled, and the kingdom of God is at hand; repent and believe in the gospel.’ Passing alongside the Sea of Galilee, he saw Simon and Andrew the brother of Simon casting a net into the sea, for they were fishermen. And Jesus said to them,‘Follow me, and I will make you become fishers of men.’ And immediately they left their nets and followed him. And going on a little farther, he saw James the son of Zebedee and John his brother, who were in their boat mending the nets. And immediately, he called them, and they left their father Zebedee in the boat with the hired servants and followed him.” —Mark 1:14–17, ESV

Before we consider the specific gospel elements this passage reveals, take note that it expressly states that Jesus was “proclaiming the gospel” (v. 14). It couldn’t be clearer—this is a gospel passage! People say all kinds of things are part of the gospel by proof texting and taking Bible verses out of context. But using Mark 1:14–17 as an anchor text is different. This passage not only expressly states that Jesus was sharing the gospel, but it also specifies what he preached as part of the gospel. That’s why these verses are vitally important to our understanding of Jesus’ gospel. So when Jesus began proclaiming the gospel, what did he say? Let’s take a closer look.

Jesus said, “The kingdom of God is at hand” (v. 15). This is the major declarative statement of his gospel in Mark 1:14–17. The three imperatives come immediately after: “Repent,” Jesus said, “believe in the gospel,” and in verse 17, “follow me.” For clarity, we have summarized these essential elements into a concise list of headlines (we’ll dig much deeper into each one below):

One reason it’s important to distinguish between the declarative statements of the gospel and the imperative responses to the gospel is to help us understand that the imperative responses are actually part of the gospel. In fact, we might say that they are so critically connected that you can’t have one without the other. As such, it’s not enough to hear that “the kingdom of God is at hand.” Jesus made it crystal clear that this declaration demanded a response! When he called his first disciples to repent and believe in the gospel (his declaration), he made it crystal clear what their (and our) response should be. These two imperatives are the first steps of following Jesus.

We use the word “imperative” to describe these three specific responses not only because they are in the “imperative” mood in Greek and in English grammar, but also (and more importantly) because Jesus makes his calls to action imperative to the gospel—in the sense that they are essential to the gospel. That is, we can hear the declarative statements of the gospel, but if we don’t repent, believe in the gospel, and follow Jesus, we won’t be saved! It’s disruptively simple.

As you consider these four elements revealed in Mark 1:14–17, are you struck by the centrality of God’s kingdom and the inclusion of following Jesus as an essential element of the gospel? These two elements are not common in gospel preaching today! While we’ll look at these two elements in much greater detail below, it will be helpful to begin to understand how God’s kingdom and following Jesus are essential elements of the gospel.