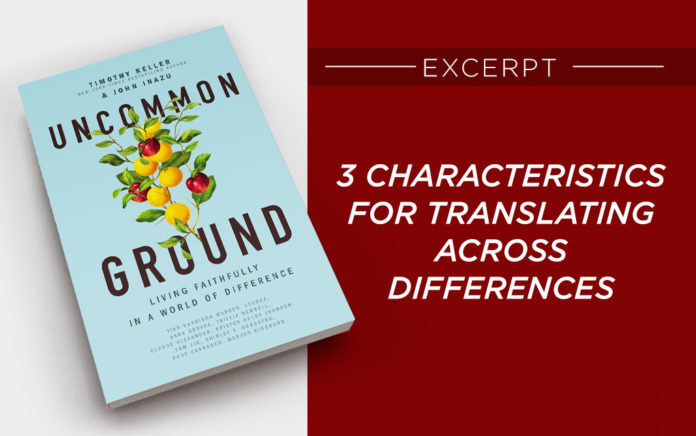 Why humility, patience and tolerance are key to finding common ground

Excerpted From
Uncommon Ground
By Timothy Keller and John Inazu

In my role as a translator between two worlds, there are three characteristics I believe are critical not only to living with difference but also to the act of translating across difference—humility, patience and tolerance.

Humility acknowledges that I cannot always prove to others why I believe that I am right and they are wrong. Many of us are shaped over time by the habits, practices and institutions in which we are embedded. We come to see the world through those lenses, and as my friend Rich reminds me, challenging a way of seeing is not as easy as deconstructing a logical fallacy or pointing out a knowledge gap. Change, if it comes, often depends on relationships of trust that are built over time. Sometimes the relationships that lead to change will take a lifetime.

Patience means restraining myself when people in either of my worlds project onto me their assumptions about “that other world.” Sometimes the inapt characterizations bother me, but more often they amuse me, like the time a faculty colleague said to me, “I don’t get you; you’re religious, but you care about poor people.” Or the many times I’ve heard from Christians who tell me they can’t trust a “liberal law professor” like me. I regularly encounter people in my university world who assume from my faith that I am a Republican who likes guns. People in my church world often assume from my profession that I am a Democrat who reads only the New York Times. (For the record, I have been politically independent my entire life, I have disliked guns since losing three high school classmates to gun violence, and I am deeply ambivalent about the New York Times.)

Tolerance means a willingness to distinguish between people and their ideas. In my two worlds, I encounter people whose ideas give me pause. Not everybody, to be sure. Like most people, I have friends whose beliefs and ideas are closer to my own. But many of my acquaintances—and some of my friends—require me to move tolerance from an idea to a practice. Both the university colleague whose understanding of diversity so clearly excludes religious diversity and the church parishioner who lacks any understanding of diversity at all hold beliefs I find harmful to our society. But tolerance means remembering that both are human beings who are more complex than the stereotypes I might ascribe to them, and that I likely have something to learn from each of them.

Most of us could stand to be more humble, patient, and tolerant with each other. This is not to say that our differences are unimportant. Many of our differences matter a great deal, and to suggest otherwise is ultimately a form of relativism. But we can still choose to be gracious across our differences. We can also avoid demonizing others, which might help us better understand their perspectives.

Good lawyers know that the success of their own arguments depends upon knowing the best arguments of the other side. The best arguments are not caricatures; they represent the most charitable and most sophisticated accounts of an opposing view. When we demonize the other side, we miss important insights that can only be learned through charitably understanding a different perspective. We lose the possibility of finding common ground.

For most of us, finding common ground will mean partnering with people, institutions, and movements that diverge in important respects from our core convictions. We seek common ground with people who hold views antithetical to the gospel whenever we work with, support, or vote for Republicans or Democrats. We facilitate religious beliefs and practices that we believe are wrong when we rightly advocate for the religious liberty of all. Most of us work for institutions that engage in some forms of injustice alongside their good endeavors. Living in the world means seeking common ground with people and pursuits that are not gospel-centered.

Seeking common ground across difference not only advances common interests but also bridges relational distance. I think of my friend Eboo Patel, one of the national leaders of interfaith work on college and university campuses and the founder of an important organization called the Interfaith Youth Core. Eboo’s blend of Muslim faith and progressive politics lead us to differ over many important issues. But we have found ways to partner in our advocacy for humility, patience, and tolerance across these differences, even though doing so increases the space for each of us to advance views with which the other disagrees.

Eboo and I speak, teach, and write together. And we have become friends. We talk about each other’s backgrounds, families, and dreams. We argue about theories of change and undergraduate readings. We laugh at each other’s jokes—at least the first time we hear them; we have now spoken together enough times that we can finish them for each other. And we mourn together. After my father learned of his cancer diagnosis, Eboo checked in regularly with phone calls and texts. And when my father died, Eboo was one of the first people to reach out to me. Eboo’s prayers are quite different from mine, but I am grateful when he prays for me.

From Outreach Magazine  Bob Merritt: Done With That

I have suggested that we can find common ground with others even when we lack a shared understanding of the common good. But this will most likely happen through interpersonal relationships. I am increasingly convinced that most of us need to start locally, or at least with relationships, like mine with Eboo, that bring us into regular contact with one another. These relationships will require a kind of vulnerability as we engage in the vocation of translation. They will mean sharing parts of ourselves and taking personal risks: we are translating not only words but our lives. And for Christians, the aspirations of humility, patience, and tolerance—and the virtues of faith, hope, and love—will help us in the work of translation to which we are called.