Home Resources Books Choosing Hope in the Midst of Despair 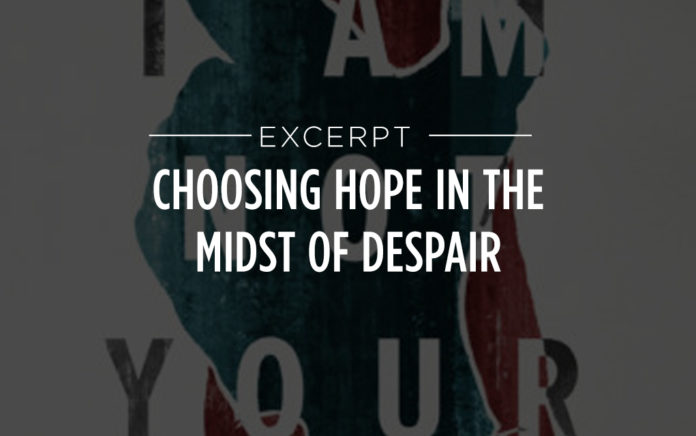 Stories are key to saving us from ourselves.

Excerpted From
I Am Not Your Enemy
By Michael McRay

Much of what passes for public storytelling today comes to us as “the news.” And the news tends to be filled with stories of violence and division—and not in ways that teach us how to bridge these divides. We need to tell better stories than ones with violent beginnings, middles and endings. I embarked on this story gathering project because I wanted to help stretch my own imagination to be more generous and creative by meeting people doing what so often seems impossible: choosing hope in the midst of despair.

In this book, I want to tell you these kinds of stories. I want to introduce you to incredible people from Palestine and Israel, Northern Ireland, and South Africa, people who have grown up and grown old in places of violent conflict and deep division. The people I’ve met during my travels in these countries are fully grounded in the pain and possibility of life.

They know that no good comes from doing unto others the nightmares done unto us. They live with the kinds of stories that can wreck people, and they know that stories like that possess us—either devouring us like demons or enlivening us like water. They want new life to come from their loss. They seek peace out of pain.

In the biblical stories told in the book of Acts, there’s a man named Saul who led persecutions of a new group of people who came to be known as Christians. He lived in fear of them, and they lived in fear of him. The writer of Acts tells us that one day, while traveling from Jerusalem to Damascus, Saul was blinded by a bright light and was confronted by the spirit of Jesus. Saul’s whole world changed. For a few days, he lived in darkness. Then a man called Ananias came to him, placed hands on him, and what was blinding Saul left his eyes, and his sight returned. More than that, though, he could see, truly see—in ways he hadn’t before.

From Outreach Magazine  Why Christmas Is Rough on Pastors

Like Saul after the light, or the man from Bethsaida, many of us have been blind. We’ve been unable or unwilling to see the truth of our divisions. But the scales are falling from our eyes now. We’re beginning to look with “eyes wide open,” though our vision may still be blurred. We need wise others to meet us in our darkness and put hands on us so that we might finally see—wisely, with story.

The people and stories in this book can help us. They can show us not just where to look but how to look. They can orient us toward hope, and Lord knows we need it. In these pages, we hear from a peace builder about the dangers of dialogue that doesn’t lead to freedom. We hear from a community center director on what to do when trauma is stuff of routine rather than stuff of memory. A former soldier teaches us to name what is wounded rather than ignore the pain, and a mother who lost her son shows us how to refuse vengeance.

We meet a lover of Shakespeare who created a haven of beauty for those on the margins, and we encounter people who craft way stations of refuge for those in need of shelter. We hear how a woman made space in her life for the man who murdered her father. From a youth worker, we learn that reconciliation may mean little if it doesn’t address the surrounding systems of inequality. From a community theater director, we hear of life under oppression and the journey to let go of the hatred that plagues like poison. And from two bereaved fathers, we are invited to imagine how we might meet devastating loss with grief and action.

These stories can help save us because they aren’t stories of extraordinary people; they’re stories of ordinary people who found themselves in extraordinary circumstances and simply did what they thought was right. They’re people like us. Made of the same stuff. It would be too easy to dismiss these stories as the stuff of saints. Don’t. The people I met have discovered a wisdom that tells them the world doesn’t need another story of revenge or retribution. It needs a different story, one of reconciliation and hope. And if the world needs that from them, it needs it from all of us.

Excerpted from I Am Not Your Enemy: Stories to Transform a Divided World by Michael T. McRay. © 2020 by Herald Press, Harrisonburg, Virginia. Used with permission. HeraldPress.com.