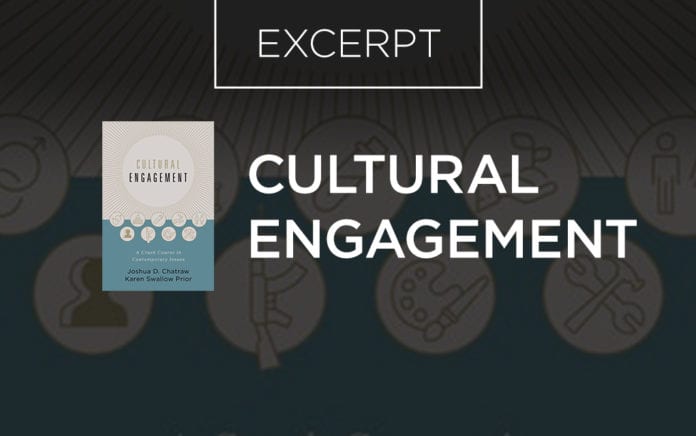 An alternative to the Benedict Option for navigating post-Christian America.

Excerpted From
Cultural Engagement
Edited by Joshua D. Chatraw and Karen Swallow Prior

In 2017, Rod Dreher published his bestseller The Benedict Option: A Strategy for Christians in a Post-Christian Nation. Dreher argues for a strategic withdrawal of Christians from public life for the sake of nurturing their own faith communities and preparing for future reengagement when American culture is in ruins and people are longing for a better way. David Brooks called The Benedict Option “the most discussed and most important religious book of the decade.”

Dreher frequently blogged about the Benedict Option before the book’s publication, so Christian leaders have been discussing his proposal for about five years. Many have offered alternative proposals, drawing on historic figures such as William F. Buckley, Francis of Assisi, Abraham Kuyper and William Wilberforce. Here, I offer my own friendly alternative to the Benedict Option. It is covenantal, congregational, countercultural, catholic and commissioned. I call my proposal the Paleo-Baptist Option. The Paleo-Baptist Option offers a way to navigate post-Christian America that is more deeply rooted in local churches and more intentionally missional than the Benedict Option.

The Rise and Decline of the Paleo-Baptist Vision

The Baptist movement began in the first half of the seventeenth century. The Paleo-Baptist vision, which developed during the first two hundred years of the Baptist movement, focused on local churches and cultivated an identity that was covenantal, congregational, countercultural and commissioned.

Early Baptists formulated their views of salvation and the church in covenantal terms. To be a Christian was to participate in the eternal covenant of grace through repentance and faith. Congregations were regenerated communities wherein professing believers voluntarily covenanted together in membership. Believers’ baptism was considered the sign of the new covenant and represented the individual’s covenant commitment to individual and communal discipleship. To fall into persistent unrepentant sin was to transgress the church’s covenant and possibly evidence that you weren’t really a partaker of the covenant of grace.

Early Baptists practiced congregational polity. They believed that every local church is a microcosm of the church universal and that it is the responsibility of the entire membership to exercise spiritual oversight over one another. Churches are kingdom embassies, church members are kingdom citizens and every kingdom citizen takes ownership of the King’s agenda. While Baptist congregations set apart individuals to serve as pastors and deacons, they argued that all believers were called to the ministry of proclaiming the gospel in word and living out its implications in deed.

They were countercultural, though not like the Anabaptists who rejected the legitimate authority of magistrates or embraced pacifism. Baptists desired to see Christians hold government office, they professed loyalty to the Crown, many fought during the English Civil War, and a few even sat in Parliament. Nevertheless, Baptists were countercultural in that they rejected the establishment of the English state church. They wanted a nation governed by Christian principles, but they advocated liberty of conscience, arguing that one is ultimately accountable to God alone for his or her religious convictions.

The earliest Baptists embraced a form of Free Church catholicity. In their confessional statements, they echoed the ecumenical creeds in formulating their views on the Trinity and Christology. The Orthodox Creed (1678) commended the ancient creeds to General Baptist congregations. The Second London Confession (1689) argued strongly for a universal visible church, of which Baptists are but one part. Calvinistic Baptists also understood themselves to be a part of the “Protestant Interest,” the transcontinental Reformed-Lutheran bulwark against the encroachments of Roman Catholicism.

Finally, Baptists understood themselves to be a commissioned people, though this emphasis came along 150 years after the Baptist movement began. Though early Baptists were committed to evangelism and church planting, the seventeenth century was not a time of widespread missionary work by Protestants. By the early eighteenth century, General Baptists had imbibed deeply of Enlightenment skepticism and were drifting into heresy. Particular Baptists, influenced by hyper-Calvinist rationalism, often downplayed evangelistic urgency. Near the end of the Evangelical Awakening in Great Britain, key Baptist theologians offered evangelical rationales for evangelism and foreign mission. The key verse became Matthew 28:19–20, which Baptists interpreted as a binding command on every generation of believers.

With the exception of an emphasis on mission, among American Baptists these Paleo-Baptist priorities were either lost or redefined during the nineteenth and twentieth centuries. Many Baptists embraced a radical form of biblicism that divorced Scripture from any form of tradition, rejecting all creeds (and sometimes even denominational confessions) in principle. Baptists increasingly interpreted their historic principles through the lenses of Enlightenment individualism and Jeffersonian democracy. By the twentieth century, spokesmen were arguing that the Baptist tradition is quintessentially American because of the Baptist commitment to democracy and church-state separation.

Then the world began to change. While Baptist elites resonated with mid-century Supreme Court decisions that codified secular interpretations of church-state separation, grassroots Baptists became increasingly persuaded that America was a Christian nation that had lost her way. The moral turbulence of the 1960s contributed to a growing sense of dread. Many evangelicals who were experiencing this sort of cultural angst, including millions of Baptists, signed on with the emerging Religious Right, became active in the Republican Party, and sought to reclaim America for God. That so many Baptists wanted America to be a Christian nation demonstrates the massive gap between Paleo-Baptist priorities and modern Baptist views of public engagement.

Baptists in America must reclaim the Paleo-Baptist vision and commend it to all faithful believers in our post-Christian nation. For Paleo-Baptists, local churches are countercultural communities of disciples who covenant to walk together for the sake of worship, catechesis, witness and service. To those like Dreher who are drawn to neo-monastic movements, Paleo-Baptists would say that a covenantal understanding of church membership accomplishes the same goal, but applies it to all members. When membership is restricted to professing believers, churches become the most natural context for theological and moral formation and intentional discipleship. In this vision, congregations embody the best of classical monastic priorities, but they are part of the warp and woof of meaningful church membership rather than a special form of discipleship reserved for the truly committed.

The time is ripe for what Timothy George calls an “ecumenism of the trenches” as modeled in initiatives such as Evangelicals and Catholics Together and The Manhattan Declaration. Paleo-Baptists should be willing to link arms with other believers in as many ways as we can, with integrity, without retreating from our own tradition’s core distinctives. The encroachment of militant secularism necessitates the mortification of all forms of sectarianism, denominational idolatry and party spirit. Paleo-Baptist congregations shouldn’t confuse themselves with the GOP at prayer, but rather as countercultures for the common good. Churches are missional bodies that equip members and work alongside other believers to spread the good news, serve the needy and cultivate human flourishing. This missional component remains a significant lacuna in the Benedict Option.

While the Paleo-Baptist vision represents an alternative to the Benedict Option, Baptists have much to learn from Dreher in one key area. Dreher argues that faith communities should form believers in the Great Tradition of classical Christianity. While early Baptists were committed to a form of catholicity, it’s fair to say this has never been a strong suit among Baptists. Nevertheless, I’m encouraged by the growing number of Baptists embracing the ecumenical creedal tradition, more closely observing the Christian calendar, celebrating communion more frequently in corporate worship gatherings and learning from the spiritual practices of brothers and sisters in other ecclesial traditions. These Paleo-Baptists are intentionally embracing a greater sense of catholicity without backtracking one bit on their Baptist identity. Baptists will thrive in post-Christian America if we self-consciously frame ourselves as an ecclesiological renewal movement within the Great Tradition of catholic Christianity.