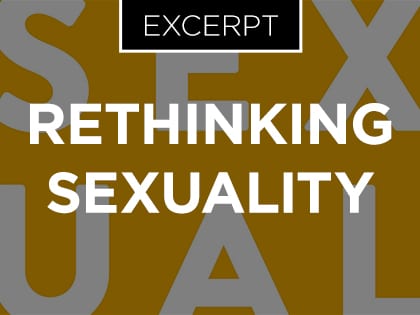 Our culture has done a thorough job “discipling people” in sexuality because the church has largely avoided the conversation. That needs to change.

Let’s take a pop quiz. Remember those from your school days? Take out a sheet of paper, and write what you think are the cultural views and biblical views in response to the following questions:

2. My daughter is marrying another woman. I’m a Christian and am confused about gay marriage. Should I support my daughter? Should I even go to the wedding?

3. My wife hasn’t been willing to have sex with me for years. I’ve asked and asked her. I’ve even offered to go to counseling, but she refuses to even talk about it. I’m about ready to give up on our marriage. What’s your advice?

5. I think it’s crazy to marry someone whom you haven’t slept with. Sex is very important, and what if you are sexually incompatible?

Chances are you had an easier time identifying how our culture would respond to these questions than what the Bible has to say about them. Why? Because throughout your lifetime, you have absorbed millions of messages teaching you the cultural narrative of sexuality. You have been encouraged over and over again to think about sexuality from the world’s perspective. If you went to public school, you were probably introduced to a value-neutral view of sex, and told not to judge other people. If you went to a secular university, your professors and fellow students encouraged sexual promiscuity and experimentation as critical landmarks of maturity and identity formation. Over the years, you’ve seen countless movies and television shows, listened to music, read books and consumed news reports that have taught you what to think about practically every sexual question.

Now, let’s compare that clamor to what you’ve learned about sex from other Christians and from biblically based sources. Did you just hear that cricket chirping?

I have found that most believers have little idea of how their sexuality interfaces with their Christian faith. I’ve met men and women who know the Bible backward and forward, have been in Bible studies and discipleship groups, yet still struggle to make sense of sexual brokenness, sexual problems in marriage and the larger cultural questions swirling around them.

One day it dawned on me. We have been sexually discipled by the world. What I mean is that we have been taught to see sexuality from the world’s narrative. I find that most Christians are more familiar with how to view sexuality through a cultural lens than with a biblical perspective. As we confront questions such as “Why can’t I kick the porn habit?” or “Where was God when I was being abused?” or “How can I enjoy sex with my spouse when we are so sexually incompatible?” we are more likely to address these issues with a secular mind-set. We conclude that we should have what we desire, that God is powerless to stop our pain and that sex can’t be good until you find the perfect partner. Why? Because the world has sexually discipled us, while the church has given us at best slices of information.

From Outreach Magazine  Redeeming How We Talk

When we hear a word such as discipleship, we may assume it is a uniquely Christian or religious term. For that reason, the concept of being sexually discipled by the secular culture may be a leap for you, but let me explain. Discipleship is the integration of what we believe into our everyday lives and relationships. It involves three things: (1) knowing what we believe, (2) living what we believe and (3) passing on what we believe.

Unlike education, discipleship isn’t relegated to a certain time of the week or a specific area of life. Instead of telling you what to think, it trains you how to think. It doesn’t solve your problem but forms your worldview.

Although Christians may talk about discipleship, the culture has actually achieved it—at least in terms of sexuality. We have seen a rapid, widespread shift of people turning from a traditional sexual ethic to the “everything goes” philosophy of the day. What we know as the “sexual revolution” began in the 1960s and has continued to create “disciples” who reject any traditional or religious definitions of sexuality and gender. This is not simply a random evolution but is the result of a concerted effort to change how people think about morality and authority.

The cultural approach to sexuality is grounded in the larger worldview of postmodernism or humanism. Essentially, the driving philosophy behind the sexual revolution is the conviction that we should throw off external standards of truth and any fixed ideas of right and wrong. Postmodernism aims to give human beings the freedom to define their own reality and morality. God’s rules or someone else’s ethical standards are irrelevant because I can create my own moral reality. Only I can decide what is the “right” or “wrong” way for me to express myself sexually. The transgender movement is the ultimate expression of postmodern thought, denying even the biological constraints of male and female. Gender becomes something we create in our own thoughts instead of a physical reality to which we must adjust our thinking. What was once called “sex reassignment surgery” is now commonly referred to as “gender confirmation surgery,” indicating that truth is found in what we feel rather than a physical reality.

Even if you don’t buy into postmodern thought, you might be surprised to know how much it has affected your worldview. We often make decisions based on questions such as “What would make me happy?” “What do I really want from life?” and “What does my gut tell me?” Many feel the social pressure to refrain from using words such as wrong, sinful or truth. Who are you to tell someone he or she is wrong to have sex outside of marriage? “Isn’t that for the individual to decide?”

The culture has done a masterful job of showing us how to live out postmodern thought through our sexuality. We see secular values about sexuality integrated into every possible aspect of life. Think about entertainment, news outlets, government programs, the educational system and the role models elevated by the world. The latest “pansexual” pop star is applauded, while conservative athletes or politicians are ridiculed for holding to a biblical sexual standard. Turn on the news, browse random magazines, flip through satellite television channels, surf the internet, walk around a college campus or visit a government-supported Planned Parenthood office, and you will see consistent messaging that sexuality is a personal choice and that no one should limit your freedom of sexual expression. Everywhere we turn, we are bombarded with the world’s sexual doctrine.

The culture is intentional about telling us what to believe about sex. The goal is to get you to think as they do. A young woman recently sent me the following email:

“I am taking Human Sexuality at a state university. I knew going into this class that it would have a worldly spin on it, but I was not ready for this icebreaker. On the first day of class, we were asked to get up and ask people if they would say yes to any of the things listed on a sheet of paper and, if so, to sign the paper. It was heartbreaking because it was such a big joke and everyone was just feeding off of this bragging of sexual experiences. I knew that society is broken sexually, but Tuesday morning I saw it in an entirely different perspective. I truly wanted to weep at the brokenness.”

Here are some of the questions from the icebreaker:

While Christians strongly disagree with the philosophy behind the culture’s approach to sexuality, we can learn from the effectiveness of its strategy. The culture has a clear belief system that is integrated into daily life and passed on through influential relationships. Consequently, the past 30 years have resulted in dramatic shifts in the average American’s view of everything from premarital sex to gay marriage.

Adopting this strategy is the shift we need to make as members of the body of Christ. It’s not enough to know what to think; we must be trained in how to think and how following Christ translates into the real-life decisions and struggles we face. When we approach sexuality from a discipleship framework, we teach and model a lifestyle of God’s truth applied to sexuality.

For example, today’s Christian teens might know at some level that God wants them to save sex for marriage. But they don’t understand why purity matters, what to do if they’ve made mistakes already and what magic line they are not supposed to cross. They have no idea that purity will be a lifelong struggle, even after marriage. But if the church were using a discipleship model to teach about sexuality, these young people would understand the underlying spiritual importance and implications of their sexuality. They would also know how to apply the broader message of the gospel (Jesus’s love and redemption, the power of the Holy Spirit’s indwelling) to their lives in all circumstances.

To turn the tide and stand its ground, the church needs to sexually disciple others so that their view of sexuality is firmly rooted in the biblical narrative, integrated into their daily lives and passed on to others. That is sexual discipleship in a nutshell.

Excerpted from Rethinking Sexuality by Dr. Juli Slattery Copyright © 2018 by Juli Slattery. Excerpted by permission of Multnomah. All rights reserved. No part of this excerpt may be reproduced or reprinted without permission in writing from the publisher.