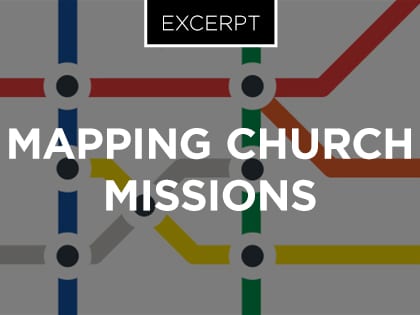 The strategy of Christian mission has changed a great deal over my lifetime, but the charge remains the same.

For many years food drives and distant missionaries shaped my perception of church missions. As a child of an army officer, I grew up in military chapels and various Protestant churches. I remember bringing canned cranberry sauce and stuffing mix for holiday food baskets. We took our hand-me-down coats to clothes closets. We prayed regularly for missionaries in the faraway lands of Africa and China. The “Today’s Missionary” paragraph in Sunday bulletins captured my attention each week. Their family pictures with exotic backdrops transported me to unfamiliar corners of the planet. In my mind, missionaries always sat under sprawling shade trees, encircled by smiling villagers, absorbing Bible story after Bible story. No one ever had to gather firewood, haul water or face injustices.

In the 1970s new worship songs began trickling into the church. The more casual lyrics touched my teenage soul in a way the old hymns missed. It awakened me to the relevance of faith in Christ. But I lacked guidance for next steps. The precept to “love your neighbor” meant to be kind and bake casseroles. The command to “go and make disciples” equaled inviting friends to church so the pastor could do the real invitation into the kingdom. The wall between world missions and local outreach was tall and wide. Personal contact with global partners was limited to furlough schedules and prayer requests. We never visited a missionary in the field.

In the 1980s and ’90s, awareness of missions increased. A stirring began within the church to prioritize missional engagement. The focus on missions reached unprecedented heights. From the 1974 International Congress on World Evangelism commitment to unreached people groups, to the expansion of conferences, university study majors and professional journals, the influence of missions was on the rise. Newsletters, biographies and memoirs by missionaries became more widely available. Congregations became more knowledgeable about ministry in the field. Ease of travel made missionaries more accessible to supporting churches.

From Outreach Magazine  Are You Ready for the Fight?

Opportunities opened for people to join mission partners for short-term projects. My first mission trip was with a team in 1983 to New York City’s Harlem neighborhood. We worked with members of a new church plant to help refurbish an abandoned brownstone, which would eventually become their new worship center. The relationship of short-term teams during those early years focused on the missionary and their church partners. No organizations existed to facilitate trips. Within another decade, however, the number of short-term teams exploded along with the number of agencies that facilitated opportunities to serve. Churches, particularly youth ministries, were seeking increased opportunities for cross-cultural mission projects. Long-term outcomes and collaborative efforts within the body of Christ, however, rarely came to the attention of the local missions committees.

Paradigm-shifting books of the early 2000s raised awareness of the unintended but growing disconnect between Christ-followers and the transformative mission of God. Richard Stearn’s The Hole in Our Gospel confronted the Western church about its inaction toward extreme global poverty. He challenged believers to live out the whole gospel by developing relationships with the world’s neediest people. Steve Corbett and Brian Fikkert’s When Helping Hurts and Robert Lupton’s Toxic Charity caused the church to rethink local outreaches and their effect on the people served. The books cited multiple studies depicting harm caused by charitable giving. The resulting dependency and loss of dignity prevented lasting development in impoverished communities. The conversation created by these books spread into valuable dialogue regarding cross-cultural missions, both locally and globally. The church needed to clarify the role of missions in proclaiming God’s kingdom here on earth.

While the call to be God’s verbal witnesses and his physical presence has stayed the same, rapidly evolving technology, globalization and entrepreneurship have expanded options for today’s missional engagement. The changing landscape presents unprecedented opportunity. The swift pace, however, also increases the potential for inadvertent damage. When pursuing ministry without a well-developed strategy, we overlook important factors such as the culture and traditions of the communities we hope to serve.

My book, Mapping Church Missions, invites conversation across seven specific topics. These topics provide a systematic overview of the issues most likely to cause conflict when developing a missions strategy. By exploring the wide range of ministry options, these topics will generate discussion pivotal to effective missional engagement. Increased familiarity with the possibilities—and the potential friction between them—provides valuable guidance for charting a church’s course and allowing us to get our missional bearings. Each topic represents a continuum:

Worthwhile ministry takes place throughout each continuum. Differences in our gifts and abilities allow for a wide variety of responses. However, some choices are better than others in certain situations. In addition, some crossover between issues will emerge in the chapters. For example, for effective good works we need to consider the crisis response and sustainability aspect of ministry to prevent damaging consequences. As you ponder the topics, you will discover the best route to get to your missional destination. As a compass helps navigate unfamiliar territory, each conversation steers your choices. You will explore a host of possibilities to discern your church’s divinely appointed role in the kingdom. You will turn a loosely connected assortment of commitments into a focused missions strategy.