Home Resources Books The Tough Conversation All Churches Must Have 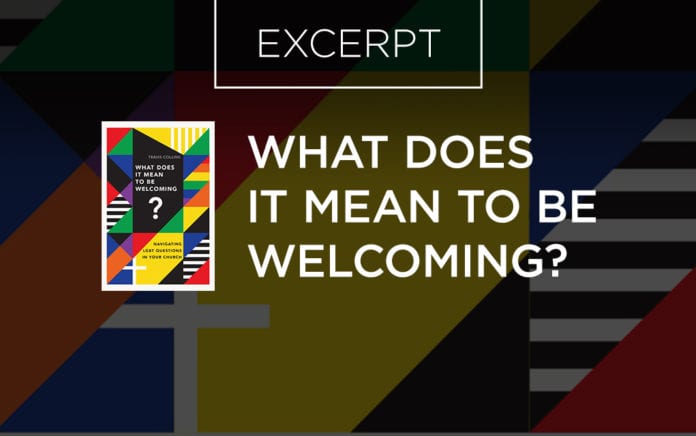 As much as we might like to ignore the LGBTQ conversation, we no longer have that luxury.

Excerpted From
What Does It Mean to Be Welcoming?
By Travis Collins

As much as many of us would like to avoid this conversation, avoidance is becoming increasingly untenable. Eventually most of us will have to address the topic of sexuality.

And this is not going away. Countless communities of faith are now asking if they should address the topics covered in this book. If so, how? And when?

Should a Church Issue a Position Statement?

Churches across the country are deciding whether or not to issue position statements on the matter of same-sex relationships. The idea of issuing a position statement has elicited deeply emotional responses. Congregations have been divided, with some wanting to take a traditional stance, with others wanting to issue an affirming statement and with still others hoping their church will not say anything at all about it. David Gushee calls these three groups the traditionalists, the revisionists and the avoiders.

“Everywhere I go, I run into three different kinds of responses to the LGBT issue: … Avoiders want to evade the subject for a wide variety of reasons, including genuine convictional uncertainty, fear of hurting people and fear of conflict and schism. …

“Avoiders are often quite intense in their desire to avoid the issue altogether, often linked to their responsibility for holding institutions together or keeping their jobs. … Whether rightly or not, the LGBT issue has become the hottest of hot-button issues in our generation, so ultimately avoidism proves insufficient. Everyone will have to figure out what they will think and do about this.”

I believe Gushee is right.

In October 2017, the Church Clarity website (churchclarity.org) was launched. On their home page the leaders of this initiative declare “churches should be clear about their policies” on same-sex matters, for “ambiguity is harmful and clarity is reasonable.” They plan to give a score to churches and publish the scores on their site. Lots of people are skeptical of the intent behind this initiative and predict that after the “scoring” there will be public pressure on churches to score “Affirming.” Yet, I have to agree that there is a lot to be said for clarity.

Avoidance of a decision and position on this matter is no longer an option for churches.

You Can Be Either Proactive or Reactive

My sense is that a church is likely either to take a proactive position now or a reactive position later. In an old ad campaign for Fram oil filters, an auto mechanic would say, “You can pay me now … or pay me later.” The message was that the consumer could spend a little money now or a whole lot of money after a catastrophe. The same is true for churches and positions on this debate. We can make a decision now … or make it later.

The matter is exploding in divisive ways among congregations all over the country. Without having given the topic prayerful thought, churches are responding on the fly to the following:

he nomination of beloved gay church members to leadership positions

Congregations are often taken by surprise and then forced to make big decisions amid the heat of controversy instead of through a prayerful, reasoned, calm process.

I believe it is likely that most congregations will address the matter now proactively or down the road reactively. And a reactive response will have a name or names attached to it. It will be personal. It will be in response to a situation involving a beloved member of your church family. A proactive conversation is much less emotional and much less divisive than a reactive conversation.

Neutrality Is Not an Option

Sexuality has become a defining topic in our society. Neutrality is no more an option.

This is one of the biggest cultural discussions of our generation. For a church to remain silent on this violates our call to be salt and light in the world. Churches that choose to isolate themselves and not even engage in dialogue about this topic will become increasingly irrelevant.

I believe people deserve to know where their ministers stand on this topic too. It would be irresponsible for any Christian leader or thinker to not have an understanding of the issues or articulate a position. His or her position should be taken humbly and compassionately, for sure, but he or she should be able to state a position nonetheless.

A Guiding Principle Is Needed

Without a guiding principle, future decisions about issues such as who the church will consider for ministers, who can be married and by whom, who is eligible for leadership, and so on, will be made without direction from the congregation.

In any church, the healthiest processes involve the congregation speaking to major concerns, giving direction for their leaders and ministers to follow when tough questions arise. Whether it is future search teams, business meetings or leadership discussions, it’s critical for the church to clarify its direction, at least in a general sense.

Perhaps this is a good time to talk about whether this is a conversation for a church to have in its interim period between pastors (for those denominations who have interim periods). If there is a clear and large majority of the congregation that agrees on this topic, I believe the interim period between pastors is a good time to make the decision. A decision gives direction to the search committee so that they can find a pastoral candidate who is compatible with the congregation. It also is fair to the potential pastor. For one thing, he or she will not have to come in and tackle this issue. For another thing, it helps the potential pastor know what he or she is getting into. The pastor has compatibility questions to answer as well.

However, if the congregation is not clear about how it will handle people who are in same-sex relationships, and if there is no obvious consensus, then it is hard to imagine such a congregation coming to a healthy conclusion on this topic without a pastor in place. While I believe a pastor should not hand down an edict on a topic as important as this, a pastor’s guidance will be critical if a diverse church is going to handle difficult discussions and come to some sort of conclusion without splintering.