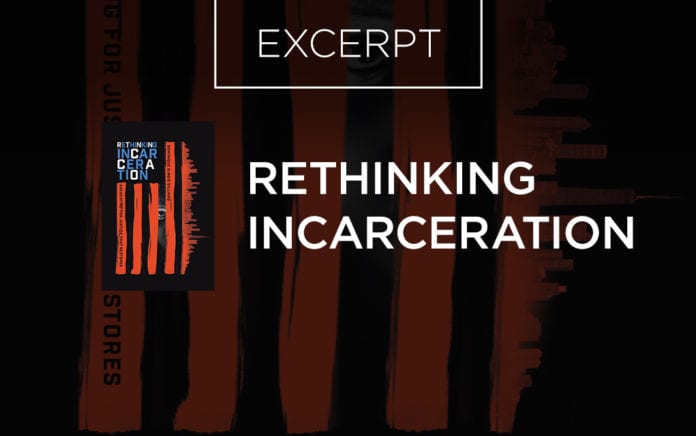 We need to take another look at our prison system and our astronomical rates of incarceration.

Today, it is predicted that nationwide one in three black males and one in six Hispanic males will be incarcerated in their lifetime. We have come to accept this as natural. But why doesn’t our discipleship inspire us to interrogate this belief?

This view of black and Hispanic men is ungodly, and we must repent. Stigmatizing entire communities is nothing new. In fact, Jesus came from Nazareth, and it was believed that nothing good could come from there. When black and brown people are universally criminalized, we all suffer. And when the church fails to name, renounce and reshape this through biblically based discipleship, we too have blood on our hands. As Bryan Stevenson writes, “We are all implicated when we allow other people to be mistreated. An absence of compassion can corrupt the decency of a community, a state, a nation.”

When we dehumanize others, we become less human ourselves. In his seminal text The Hidden Wound, Wendell Berry says, “No man will ever be whole and dignified and free except in the knowledge that the men around him are whole and dignified and free.” Taking this even further, Berry continues, “If the white man has inflicted the wound of racism upon black men, the cost has been that he would receive the mirror image of that wound into himself. As the master, or as a member of the dominant race, he has felt little compulsion to acknowledge or speak of it; the more painful it has grown the more deeply he has hidden it within himself. But the wound is there, and is a profound disorder, as great a damage in his mind as it is in his society.” With this knowledge, the church must not shy away from political activism. We helped pass the laws that became the War on Drugs, and now we must mobilize to change them.

From Outreach Magazine  Dream With Me

We have a responsibility to defend the dignity of society’s most vulnerable, and policies such as mandatory minimums and no-knock warrants put both police and poor people at risk. These policies do not enhance our society, make our communities safer or reflect God’s love and justice. They are legislative issues that the church can, and must, work to change. We have an ethical and theological responsibility to advocate for a justice system that brings restoration to individuals and communities.

While the United States constitutes only 5 percent of the world’s population, we have 25 percent of its incarcerated populace. Statistically, our nation currently has more people locked up—in jails, prisons and detention centers—than any other country in the history of the world. We currently have more jails and prisons than degree-granting colleges and universities. In some areas of the country, there are more people living behind bars than on college campuses.

One out of every 25 people sentenced to the death penalty is falsely convicted. In many states, pregnant women are shackled to gurneys during their delivery. Thirteen states have no minimum age for prosecuting children as adults, such that children as young as 8 have been tried and sentenced as adults, left vulnerable to trauma and abuse while living among adults in jails and prisons.

Eighty thousand inmates per day are locked in solitary confinement, where they are quarantined in a 12-by-7 foot concrete cell (smaller than a standard horse stall), frequently for 23 hours a day, and are only allowed outdoor access and human interaction for 1 hour. This dehumanizing form of “incarceration” is more accurately defined as torture—a slow assault on the dignity of individuals and a strategic disintegration of their body and psyche. The Geneva Convention defined torture as

From Outreach Magazine  How to Avoid Misappropriating Church Funds

“Any act by which severe pain or suffering, whether physical or mental, is intentionally inflicted on a person for such purposes as obtaining a confession, punishment for an act that a person is suspected of having committed, or intimidating or coercing a person for any reason based on discrimination of any kind, when such pain or suffering is inflicted by or at the instigation of or with the consent or acquiescence of a public official or other person acting in an official capacity.”

How did this become our reality, and who are the inmates serving time behind bars? While most theorists trace our criminal justice system’s exponential growth back to Richard Nixon’s commissioning of the drug war, this—in isolation—is an inadequate analysis. The history that bred our carceral quagmire predates Nixon’s presidency, and it is much more expansive than the War on Drugs. While the drug war is undoubtedly a primary driver of our nation’s incarceration explosion, it is inaccurate to depict it as the independent impetus of mass incarceration. The War on Drugs is only one of five pipelines currently funneling people into prison, jails and detention centers nationwide. The other four carceral conduits are the crackdown on immigration offenses, decreased funding for mental health, private prisons and detention centers, and the school-to-prison pipeline.

Each of these pipelines is built on a legacy of racist and classist legislation that has paved the way for our present carceral epidemic. To comprehensively understand the evolution of mass incarceration, we must do something that will surprise most: begin our exploration at the time before slavery ends.