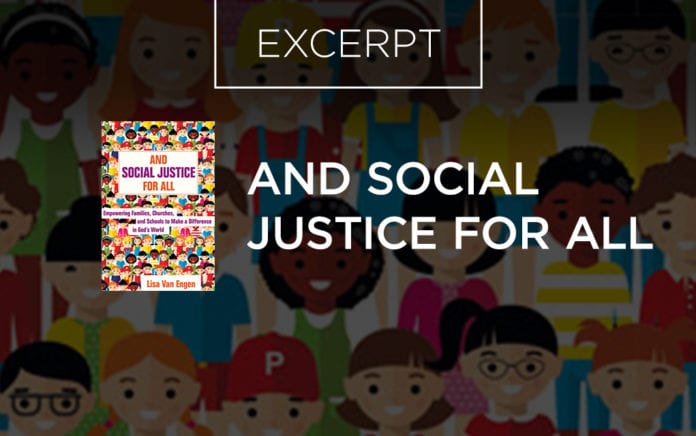 Immigrants face an uphill battle to citizenship. Here is a snapshot of what they face.

Excerpted From
And Social Justice for All
By Lisa Van Engen

Immigrants and Refugees: The Gift We Received

The goal of the Immigration and Nationality Act of 1952, “as described in the legislative language was to preserve the sociological and cultural balance of the United States.” The act continued selective and limited immigration. The quota system gave more visas to people of Northern and Western European descent. Although President Truman vetoed the law because he believed the quota should have been higher for Asian nations, Congress still passed it.

Today the United States uses a highly structured vetting process. Refugees pair with case managers, who collect identifying documents. They collect biological data like fingerprints and facial recognition and perform biometric security scans. Applicants are then interviewed, and documents reviewed again. Resettlement Support Centers receive the documents of strong candidates. Then U.S. security agencies such as the FBI, CIA, Department of Health and Human Services, and the State Department screen candidates. Candidates then receive another interview and submit fingerprints. The fingerprints are then screened against the FBI, DHS and Department of Defense databases. If these screenings are passed, refugees then undergo a medical exam. Applicants attend a cultural orientation class and are assessed for an appropriate resettlement area. At this time, refugees travel to the United States and have one year to apply for a green card. Throughout the process, cases continue to be checked against terrorist databases. Of the roughly 17.2 million refugees worldwide, only 1 percent are ever reestablished in another country.

Crucial to understanding immigration is knowing the stories of those without legal documentation. Today 11 million undocumented immigrants are living in the United States. They make up disproportionate amounts of the United States’ low-skilled labor market: farm workers, construction workers, housekeepers, janitors, groundskeepers and dishwashers. Today a group of people lives as a permanent underclass in our country. They pay taxes and contribute to Social Security benefits they will never receive themselves. They wake up each morning and provide the labor for the most underpaid, backbreaking, unnoticed jobs.

From Outreach Magazine  What's the Difference Between a Fake and a Follower?

Just over one million undocumented immigrant farm laborers in the United States do essential work for our agricultural system, filling jobs that citizens do not. At least 50–70 percent of farm laborers in the country today are unauthorized. If you were to read the job description for an agricultural worker, you would find the following: inspecting, planting, weeding and harvesting by hand, spraying fertilizer and pesticides. Workers often move from harvest to harvest. They work in all weather conditions—heat, rain, wind and cold. There are between 1 and 2.5 million hired farmworkers in the United States.

This is the reality in which they live. Many immigrants are limited to the boundaries of the farm they work. Undocumented workers are at a high risk for exploitation. Employers could withhold wages or provide unfair working conditions without fear of retribution, because undocumented workers would be hesitant to seek help from law enforcement. They are at risk for hunger and face difficulties acquiring adequate shelter, health care and education. It is estimated that 5.5 million children in the United States have at least one undocumented parent. These families live with the constant fear of separation. Undocumented persons are only eligible for school and emergency room services, no other government benefits. Their story is a part of the history of the United States and the church.

My family attends a multilingual church; we sing in English and Spanish, sometimes Swahili or other languages. There I have learned it is a beautiful thing to know I’m not the center of the world. Suddenly, fear of what is not familiar does not seem so insurmountable. The world and its people grow softer and deeper. The multicultural church can be messy—the simplest things can be lost in translation—but there is power in being together and working to understand one another.

From Outreach Magazine  Clay Scroggins: How to Lead in a World of Distraction

In his book The Way of the Heart, Henri Nouwen says:

“To die to our neighbors means to stop judging them, to stop evaluating them and thus to become free to be compassionate. Compassion can never coexist with judgment because judgment creates the distance, the distinction, which prevents us from really being with the other.”

When I was eight years old, the movie An American Tail came out. When a family of mice emigrates from Russia to the United States, their young son gets separated from them. In the quiet of the night, young Fievel sings a heartwarming song about the connection he feels to the family he misses. He knows that somewhere, wherever his family might be, there is someone saying a prayer for him. Our immigrant and refugee brothers and sisters need our prayers and our voices.

The Christian Reformed Church Office of Social Justice teaches a class called Church Between Borders. That statement cannot be refuted; we are a church that resides between the borders of other countries. As God’s church, we are called to show hospitality to the stranger. How will we respond? Matthew 25:35 says, “I was hungry and you gave me something to eat, I was thirsty and you gave me something to drink, I was a stranger and you invited me in.”

This excerpt is © 2018 by Lisa Van Engen. It may not be excerpted or distributed without the express written permission of the publisher. And Social Justice for All will be published by Kregel Publications in February 2019.