Home Resources Books Why Christ Must Be Over Our National Identity 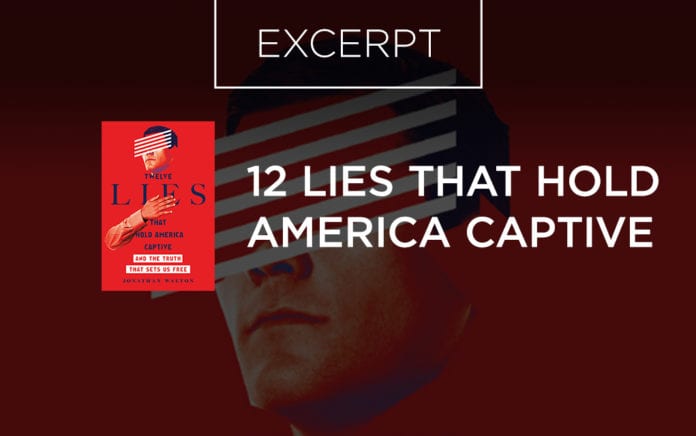 God shows no favoritism to the rich, powerful and well-connected.

It doesn’t matter how segregated our worship may be on Sunday mornings, the kingdom of God has enough room in the program for our praise and our pain. The altar is big enough for all of us who cry, and the aisles are wide enough for us all to run and dance. Franklin Graham may not see me, but my Father in heaven surely does, and the day will come when every tribe and every tongue and every nation will praise and worship him in the heavenly places. And confessing that you are a white American evangelical is not the price of admission to the kingdom. In fact, to center racial, national and folk religious identity over Jesus will lead to eternal damnation.

God shows no favoritism to the rich, connected and those of earthly power and influence. Jesus’ brother explains this in James 2:1–13, and the Acts church put it into practice. God reengineered the social fabric of the early church in Acts 6 when the Hebraic Jews discriminated against the Hellenistic Jewish widows in the daily distribution of food. Instead of correcting this problem by giving 50 percent of the power to the marginalized and 50 percent to the Hebrews, he gave all power and responsibility for distribution to the marginalized group. This would be like allowing African Americans to have total access and leadership over education in America, or Native Americans taking over the Departments of Agriculture, Interior, Transportation, State, Defense and Homeland Security—putting them in charge over the system that exploited them and then submitting to their leadership.

This happened in Scripture when we see Stephen, a Greek Jew, preaching the gospel of Christ after having been selected by early church leaders to take over the distribution of food. Stephen was lower class and lower status, but not according to the kingdom of God. He was wise, full of the spirit and wisdom, and therefore qualified and worthy of leadership.

From Outreach Magazine  How Can You Plan for a Crisis?

In an unjust society, we are not seen and do not live as equals. But God created us all with equal worth and value, and we all have equal access to God in Christ. In a fallen world we are not created equal and thus don’t have equal opportunity to succeed in the race for life, liberty and the pursuit of happiness. In present-day America, to take the Constitution and extrapolate equal value for every person is like putting a brand-new paint job, tinted windows and fresh tires on a car with no engine or seats. It looks great on the outside but was never meant to move forward or carry anyone.

The framers of the U.S. government only included white, landowning men of good social standing as enfranchised citizens. They did not believe that all humans were created equal and therefore had no intention of entitling all people to equal treatment. They also took steps to ensure that people outside of their circles wouldn’t receive equal treatment. In 1787, James Madison said in the “Secret Proceedings of the Constitutional Debates of the Convention” that the Senate “ought to be so constituted as to protect the minority of the opulent against the majority.”

But if we revise history to create a corporate narrative that we are a Christian nation of immigrants seeking better lives, we can dictate what the individual value and identity of each person are as well. The Declaration of Independence’s statement that “We hold these truths to be self-evident that all men are created equal” is perplexing at best and at worst a declaration that all who are not male, white and wealthy are not equal and are presumably less than those gathered together in 1787. This country’s actual history and lived reality reveals that this declaration of equality is the opposite of what was actually intended by its authors and experienced by natives, women and minorities.

Without being rooted in a practical theology that values the truth that all people are made in the image of an objective, all-knowing and loving God, this statement is an impeccable brochure for a land that doesn’t exist. In reality, whole swaths of God’s creation are left on the outside of those supposed all-inclusive statements. In biblical Christianity, God alone confers value and identity—not presidents, senators or representatives.

When the idol of America isn’t central but the resurrected Christ is, profound transformation is not just possible but inevitable. And not just in Scripture but in our present day.