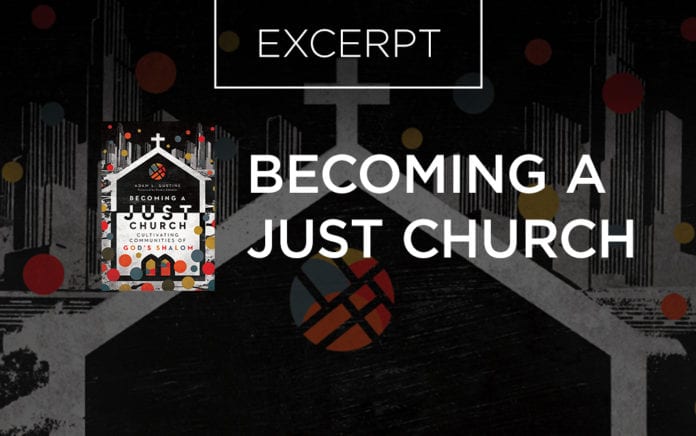 The gospel forms a kinship between oppressor and oppressed that can transform the way we relate to one another.

Excerpted From
Becoming a Just Church
By Adam Gustine

On my relatively short list of spiritual heroes, Father Greg Boyle is near the top. Father Greg has spent decades working with gang members in Los Angeles. Over that time he has helped give shape to the largest gang prevention and reentry work in the world. Most compellingly, it isn’t a project to him. It’s a work of family. Father Greg observes, “I suspect that if kinship was our goal, we would no longer be promoting justice, we would, in fact, be celebrating it.” This statement saturates the ethos of the community in formation at Homeboy Industries in downtown LA.

There are many who might bristle at or even categorically reject Father Greg’s assertion. But we need to wrestle deeply with these thoughts because the evangelical impulse toward issues of injustice, particularly when it deals with the character of our relationships, has been to gloss over the long history of slight, injury, discrimination and outright oppression. These injustices have shaped our national story as well as the story of the church in America, and we have not done the hard work of wrestling with the implications of that long history of hurt.

Considering how tone deaf we can be, Father Greg’s idea might feel unsatisfactory for folks who have experienced the pain of injustice at the hands of their brothers and sisters. This is a reaction I can appreciate and is one for which I have deep compassion. But Father Greg is not advocating a kind of blind acceptance of the past or just moving on from the wounds of history and the relational infidelity we (those from positions of power and privilege) have perpetrated against the most vulnerable people in our midst.

Boyle often quotes Mother Teresa, who said, “If we have no peace, it is because we have forgotten that we belong to each other.” This sentiment makes sense through the lenses we have examined thus far. God, eternally existing in a perfect kind of kinship as the Trinity, created us for that same perfect kind of kinship shared between God and humanity. We were created to live in an eternal shalom community. From the beginning we have belonged to one another as we have together belonged to God. That is our human story, and more significantly that is our story as the people of God.

Belonging to one another does not erase the serious history of injustice that has invaded our experience and destroyed the shalom community of God. It does not mean that the record of the grievous action of high-ground folks toward low-ground folks goes away if we join multicolored hands in stadiums full of people and pray. Instead, the reality that we belong to one another, and have always belonged to one another, serves to increase the shame of the injustice and deepens the bruises of our collective experience of oppression, marginalization and exclusion. It is true that we belong together, and it is true that men have systematically dominated women, white society has categorically oppressed people of color, rich communities have exploited poor communities, and so on. That we belong to one another only highlights the extreme unfaithfulness of these actions throughout history. It is a more egregious reality, in my mind, that this is our story in light of the fact that God had purposed that we should live in shalom community together.

From Outreach Magazine  Samuel Rodriguez: From Survive to Thrive

A few years ago I attended a gathering of community-development and justice practitioners, and one evening conversations turned to the issue of race and reconciliation. One white brother suggested that since Jesus had come and the cross meant sins are forgiven, that confession and lament related to racial injustice was not needed and was, in a way, antigospel because it made white folks feel shame (something the Scriptures suggest we ought not experience anymore). The next morning, the tension felt toward this guy was palpable, and he and I found ourselves in a fairly intense conversation related to why this line of reasoning was unhelpful.

He was engaging in a way of talking about the work of the gospel that sought to excuse the national story of injustice and overlooked the cultural and systematic ways that we continue to abide racial injustice in the church. He was a prototypical apologist for “let’s just hold hands, sing and get over it.” Even though he was using the language of reconciliation, he had no imagination to understand the work of reconciliation.

But I think we can—and need to—speak of reconciliation because, theologically speaking, it’s an accurate frame of reality. That reality should increase—not numb—our sensitivity to the gross infidelity to the shalom community perpetrated against people at the margins over centuries. Those folks who represent groups (men, white, rich, etc.) who have historically acted unjustly toward marginalized people need to learn how to be in this kind of community, recognizing that we come to the work of building relationships fit for the shalom community at a significant relational deficit. This must shape the way we consider the work of building community within the church, specifically within the local church.

We belong to one another. The presence of injustice evidences the fact that we have forgotten that and continue to forget that. To be a people who are both just themselves and are able to do justice in the world, we need to see the work of pursuing kinship with one another and with folks on the margins (low ground) as essential, ongoing work as we seek to live into the fullness of what it means to be God’s people.

If we hope to cultivate communities of God’s shalom, we need this notion of kinship more than we need almost anything else. But we also need a way to get there. Saying that we are aiming for kinship is all well and good, but if we don’t have a sense of where we are now and how we might move toward kinship, we will spin our wheels in frustration.