Home Resources Books Speaking the Truth in Love About Racism 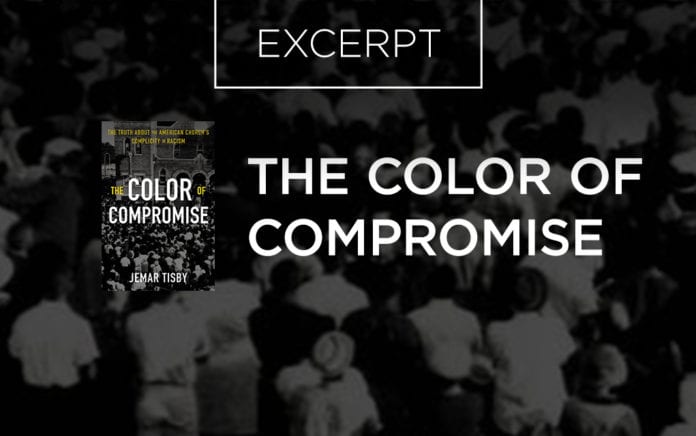 “Jumping ahead to the victories means skipping the hard but necessary work of examining what went wrong with race and the church.”

Excerpted From
The Color of Compromise
By Jemar Tisby

What do we mean when we talk about racism? Beverly Daniel Tatum provides a shorthand definition: Racism is a system of oppression based on race. Notice Tatum’s emphasis on systemic oppression.

Racism can operate through impersonal systems and not simply through the malicious words and actions of individuals. Another definition explains racism as prejudice plus power. It is not only personal bigotry toward someone of a different race that constitutes racism; rather, racism includes the imposition of bigoted ideas on groups of people.

In light of these definitions, it is accurate to say that many white people have been complicit with racism. Although there have been notable exceptions, and racial progress in this country could not have happened without allies across the color line, white people have historically had the power to construct a social caste system based on skin color, a system that placed people of African descent at the bottom. White men and women have used tools like money, politics and terrorism to consolidate their power and protect their comfort at the expense of black people. Christians participated in this system of white supremacy—a concept that identifies white people and white culture as normal and superior—even if they claim people of color as their brothers and sisters in Christ.

White complicity with racism isn’t a matter of melanin, it’s a matter of power. Other nations have different dynamics. Whether society is stratified according to class, gender, religion or tribe, communities tend to put power in the hands of a few to the detriment of many.

In the United States, power runs along color lines, and white people have the most influence.

Historically speaking, when faced with the choice between racism and equality, the American church has tended to practice a complicit Christianity rather than a courageous Christianity. They chose comfort over constructive conflict and in so doing created and maintained a status quo of injustice.

Given the history, complicity is a weak word for describing how American Christianity has often interacted with race. As historian Carolyn DuPont describes it, “Not only did white Christians fail to fight for black equality, they often labored mightily against it.”

Complicity connotes a degree of passivity—as if Christianity were merely a boat languidly floating down the river of racism. In reality, white Christians have often been the current, whipping racism into waves of conflict that rock and divide the people of God. Even if a small portion of Christians committed the most notorious acts of racism, many more white Christians can be described as complicit in creating and sustaining a racist society.

Martin Luther King Jr. said, “There can be no deep disappointment where there is not deep love.” This study is not about discrediting the church or Christians. I love the church. My concern for the church and for the well-being of its people motivates my exploration of Christian complicity in racism. The goal is to build up the body of Christ by “speaking the truth in love,” even if that truth comes at the price of pain.

The church has not always and uniformly been complicit with racism. The same Bible that racists misused to support slavery and segregation is the one abolitionists and civil rights activists rightly used to animate their resistance. Whenever there has been racial injustice, there have been Christians who fought against it in the name of Jesus Christ. Christianity has an inspiring history of working for racial equity and the dignity of all people, a history that should never be overlooked.

The black church, in particular, has always been a bulwark against bigotry. Forged in the fires of racial prejudice, the black church emerged as the ark of safety for people of African descent. Preachers and leaders in the church saw the truth of the gospel message even as slaveholders and white supremacists distorted the message to make more obedient slaves. Black churches looked to the exodus of the Hebrews from Egypt as a model for their own exodus from American slavery. Black Christians saw in Scripture a God who “sits high and looks low”—one who saw their oppression and was outraged by it.

From Outreach Magazine  To Give the Future: Dying Church Gifts Building to New Congregation

But the examples given in this book do not present a positive picture. The focus is mainly on racist acts and actors. This emphasis is purposeful. American Christians have never had trouble celebrating their victories, but honestly recognizing their failures and inconsistencies, especially when it comes to racism, remains an issue. All too often, Christians name a few individuals who stood against the racism of their day and claim them as heroes. They fail to recognize how rarely believers made public and persistent commitments to racial equality against the culture of their churches and denominations. Jumping ahead to the victories means skipping the hard but necessary work of examining what went wrong with race and the church. That can lead to simplistic understandings of the past and superficial solutions to racial issues in the present. The Color of Compromise undoes the tendency to skip the hard parts of history and directs the reader’s attention to the racist realities that challenge a triumphalist view of American Christianity.

Excerpted from The Color of Compromise by Jemar Tisby. Copyright © 2019 by Zondervan. Used by permission of Zondervan. Zondervan.com.