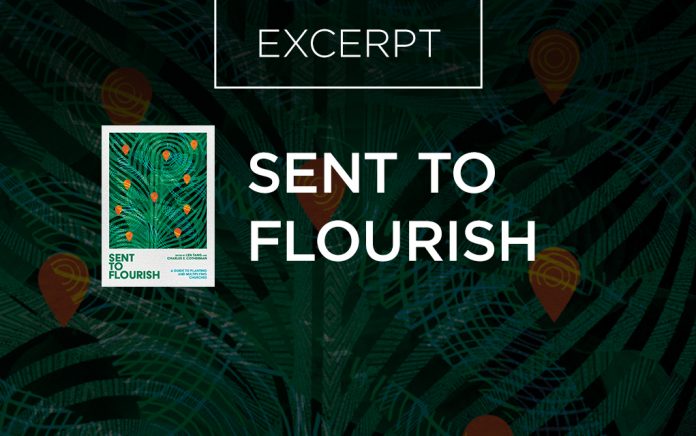 Sitting in the presence of Jesus is the most important thing a church planter can do.

Excerpted From
Sent to Flourish
Edited by Len Tang and Charles E. Cotherman

Three families in two months. In his mind’s eye James looked around at his barely one-year-old congregation. People would feel this departure. One family leaving is sad, two makes people stop and take notice, but three? James couldn’t help feeling like the remaining families would start to wonder if these people knew something they didn’t. “Should we all be getting out? Is this ship sinking? Is there something wrong with James or his leadership?”

Ah, that last question. Along with James’ grief over these departures, that last question burrows deep enough to reach another layer of fresh, more tender pain. “Are they right? Is there something wrong with me or my leadership? Do I have what it takes to plant this church? Am I capable of navigating the complexity that comes with shepherding these people and reaching the lost?”

Other fears surface. “How long can I keep this going? If many more people leave, we won’t be financially sustainable. How long can I keep putting on a Sunday smile when I’m riddled with my own doubts about myself and this church, and feeling so rejected on top of that?” A painfully honest thought, long lurking in the background, makes its way to the front of James’ mind: I feel like a fraud.

As his doubts and fears swirl, James allows himself a rare moment of honest introspection. His sleep was a mess. Exhausted as he was, his worries would wake him in the early morning and not allow him to fall back to sleep. Time with God was almost nonexistent. The bad sleep was part of it, but if he was really honest, James knew it was more than that. Being still before God forced him to feel the full weight of his fear, his doubts, his growing self-loathing. Most days it was just too painful and tiring for him to go there.

And he knew he was becoming increasingly critical and sharp with his family. Yesterday with his son, what should have been a mild correction came out as a too harsh, too angry rebuke. He could see in his wife’s face that his reaction was way out of proportion to his son’s offense. He knew it too but hadn’t yet been able to bring himself to apologize. He thought about how preoccupied he was when at home, and how he was probably spending more time sulking in front of the television than enjoying his kids. Connecting with his neighbors was increasingly awkward and felt like yet another desperate attempt to get people to come to church.

James’ thoughts went to his typical work day. Emails went unanswered because he didn’t want to deal with them. Leading and hosting his missional community had become a joyless chore and was yet another reminder that he had failed to raise up another leader. And under the surface there was a low-grade anger at his congregation—or some of them at least—for not being better at reaching out, for not serving more, for not being more affirming of his gifts, for being so screwed up in so many ways. Multiple times during a day, James would find himself daydreaming about leading some other more successful, more appreciative church, or of working in another field altogether. And then there were the temptations. Areas that he thought were long since conquered were back, sometimes with almost irresistible strength.

From Outreach Magazine  Palau: A Life on Fire

For the first time, James allowed himself to see it—the problems in this church plant were real, but the problems in himself might be his most serious problem.

Here is the issue. What undermines church planters, more often than not, is not underdeveloped skills in preaching or vision casting. It isn’t a lack of motivation or passion for the kingdom of God. No, it is a spiritual life that is not sufficiently robust to deal with the challenges that church planting brings.

Maybe it has to do with the personality types of those who are drawn to church planting. By temperament, most planters are activists, not monks, and would rather be doing than sitting, even if that means sitting in God’s presence. Or maybe it’s the never-ending list of tasks the planter has before them (and truly, it is never-ending). Maybe it is their love for lost people or desire to see their people grow as disciples that keeps planters perpetually on the go. Or on a less healthy level, perhaps it is the desire to be seen as a “success,” however one defines that. Whatever the reason, many planters struggle to take time to abide in the presence of Jesus and find refreshment for their souls.

For many, a life of sitting in the presence of Jesus is a challenge. Yet this, I would argue, is the single most important work a church planter can engage in.

It is possible to be incredibly busy yet entirely unfruitful. Jesus said as much to his disciples, and to every mission-driven disciple that would follow the original Twelve. His words are familiar, so read them slowly:

“I am the true vine, and my Father is the gardener. He cuts off every branch in me that bears no fruit, while every branch that does bear fruit he prunes so that it will be even more fruitful. You are already clean because of the word I have spoken to you. Remain in me, as I also remain in you. No branch can bear fruit by itself; it must remain in the vine. Neither can you bear fruit unless you remain in me. I am the vine; you are the branches. If you remain in me and I in you, you will bear much fruit; apart from me you can do nothing. This is to my Father’s glory, that you bear much fruit, showing yourselves to be my disciples. … You did not choose me, but I chose you and appointed you so that you might go and bear fruit—fruit that will last—and so that whatever you ask in my name the Father will give you.” —John 15:1–5, 8, 16

Note that Jesus uses the words fruit or fruitful nine times in these few verses. The longing of our hearts as church planters—to lead lives that bear lasting fruit—is the longing of Jesus’ heart as well. When our lives are fruitful, Jesus says, it brings glory to the Father and it shows that we really are his disciples. Or as we like to say in Fuller’s church planting program, “Healthy roots lead to lasting fruit.”

How does this fruitful life come about? Jesus tells us that two indispensable factors contribute to our growth in fruitfulness.

In my denomination, the Evangelical Covenant Church, the first words a new church planter hears in our training are “You will be broken.” Adversity in church planting is a given. We will find ourselves taxed spiritually, emotionally and physically—over and over again. We will have great joys but also great heartbreaks. We will enjoy deep camaraderie with cherished leaders, but also experience desertions and betrayals. This adversity, if we fail to recognize it for what it is, has the potential to destroy us.

Such pruning, we must remind ourselves, comes not because the Father is displeased with us, but precisely because we are fruitful, and he wants us to be even more fruitful. The Father’s desire and our desire are in alignment: that we bear much fruit, to his glory, and that the fruit we bear would last (John 15:8, 16). This means that every faithful church planter will experience pruning—you might even say this is a given. And you might also say this is a gift. If we take Jesus at his word, we must acknowledge that the fruitful ministry we desire cannot come without the pain of being pruned.

The second factor in our fruitfulness is time with Jesus. Unlike the Father’s pruning, this second factor is not a given. We have to choose it. And Jesus is blunt: If we do not abide in him we will not bear fruit. In saying this, Jesus is not being harsh. A branch which is no longer connected to the vine is simply incapable of bearing fruit. Similarly, apart from him, we can do nothing.

I should pause here to point out that when I use the word fruitful, I do not mean it as a euphemism for “growing a big church.” Far too often we equate size with “success,” when I believe we would do better to pursue faithfulness, and with that, rejoice in fruit appropriate to our particular call. As Paul reminds us, we can plant and water but only God can make things grow (1 Cor. 3:5–9). How can we say that the planter who leads a church of 40 vibrant, missional disciples in an incredibly challenging context is less fruitful than the one who leads a church of 400, or 4,000, in a completely different context? Each ministry, minister and mission field is different. Size and fruitfulness are not the same.