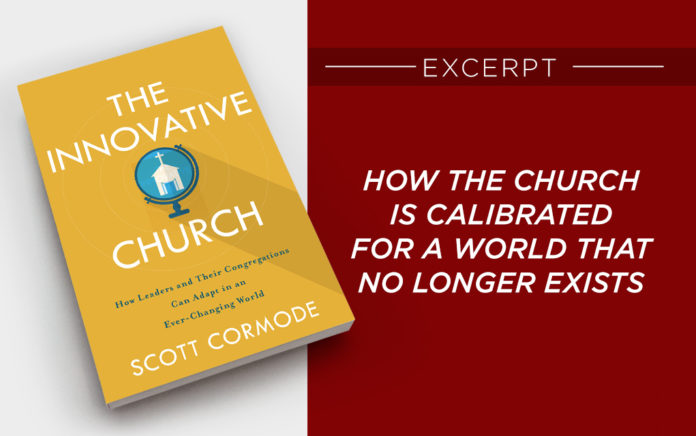 Excerpted From
The Innovative Church
By Scott Cormode

Almost everything about the current experience of church was established in a bygone era: the way we worship, the passages of Scripture we cherish and the people we expect to see. The basic contours of church have not changed, even as the world has been transformed. The church as we know it is calibrated for a world that no longer exists.

Erica knows this all too well. In 2018 she brought her youth ministry team from Florida to Fuller Theological Seminary for an “innovation summit.” Erica came to the summit bearing a burden: her young people needed help, she said, in navigating their way toward hope and joy in a world of suffering. But the old ways of doing church did not want to acknowledge her students’ pain. The old ways of leading a youth group involved distracting young people and promising a world free from pain; they did not focus on seeking a God who meets us in our pain. As Erica listened to her middle schoolers (and their parents), she could see that young people today are far more anxious, busy, and stressed than they were in the past, but the expectations of church life were no different. The old ways of being church are not calibrated to speak to the circumstances that Erica’s young people encounter each day.

The world has changed, but the church has not. The internet has transformed how people get information, social media has changed the meaning of community, and the post-2008 economy now expects more labor hours from the average worker. The basic assumptions about time, money, and community—and about membership, Bible study, and ecclesiology—have all changed. But congregations act the way that they did before the climate changed, and congregants often wish that the world would just go back to the way it once was. The mental models that we Christians hold about the rudiments of church (about things such as worship, teaching, and fellowship) were formed in the mid-twentieth century, long before social changes trans- formed the meaning of almost every institution in society. As the theologian Dwight Zscheile wisely observed, “God’s promises in Christ are steadfast, but the shape and future of the church in America is increasingly uncertain” in an ever-changing world.

Indeed, the pace of change is accelerating. Something new rolls over us even as we are still reeling from the last thing. In the past, the church had time to adjust between changes. It could absorb the initial shock of social change, wait for things to settle into an equilibrium, and then learn from those who had already adjusted to that new reality. But the wait-and-copy strategy will not work anymore. For most of the church’s history, Christians had up to a century to recalibrate in the face of a disruptive change such as the Industrial Revolution. Even in the twentieth century, the church typically had a generation to recalibrate to changes like the advent of the automobile or the rise of suburbia. But now, sweeping changes are happening years apart rather than decades apart. There is not enough time between changes before the next wave hits. The wait-and-copy strategy will no longer work because we live in what one scholar has called “a world of permanent white water.” The next wave will always come before we have adjusted. We will need to learn how to live in an ever-changing culture.

From Outreach Magazine  What Is the Gospel in Jesus' Own Words?

Even if a church figures out how to respond to some social change, it faces another problem. Congregations are tempted to make a change and then freeze that change—to breathe a sigh of relief that says they never have to change again. Think, for example, about changes in how we worship. In the late nineteenth century, cutting-edge Protestant churches incorporated organ music into their services. This was a controversial move. Established theologians opposed what they called the “innovators” who were spoiling the plain worship of God with their ostentation. Of course, by the twentieth century congregations had become so accustomed to organ music that there was an anguished cry when innovators replaced organs with guitars. Once a change has been legitimated, congregations often demand that the change become permanent, even when the culture has moved on to something else. Neither the wait-and-copy strategy nor the change-and-freeze plan will help us. Clinging to these strategies means we are dancing to the rhythm of a song that no longer plays. We need a way to recalibrate in order to keep from getting out of touch with the needs of the world. That will take innovation.

A changed world demands innovation, and a changed religious world requires innovative congregations. But there is a problem. Most of the literature on innovation assumes that the best innovations will tear down the structures of the past and replace them with something better in just the way that the iPhone camera destroyed Kodak, and Amazon replaced Borders bookstores. “Cut the ties to the past,” some say. “Burn the boats.” But we Christians can- not do this. We are inextricably—and happily—bound to the past. We will never stop reading Paul’s letters to the Corinthians, we will never stop loving our neighbors as ourselves, and we will never stop saying, “Jesus is Lord.” We cannot abandon the past.

From Outreach Magazine  What Can We Learn About Spiritual Disciplines From the Puritans?

Every Christian’s faith depends on the inherited Christian tradition. We receive the faith; we do not invent it. No Christian, for example, invents practices like prayer or beliefs such as “Jesus is Lord.” We receive them—both from God and from those who came before us. We depend on the Christian tradition. Yet, as the theologian Gregory Jones points out, “Tradition is fundamentally different from traditionalism.” He quotes the Yale historian Jaroslav Pelikan: “Tradition is the living faith of the dead; traditionalism is the dead faith of the living.” Although at some level we all know that the experience of Christianity has changed over the centuries (e.g., there are few current congregations that chant in Latin), our tendency is to believe that the present is better than the past and that the future should look about like the present.

All this makes new ideas look suspect. Yes, we must be grounded in the Bible as the authoritative witness to Jesus Christ, and yes, we must be anchored by the theological reflections of the historic Christian church. Yet we can- not be shackled to the ways the gospel has always been presented. Christian innovation cannot abandon the past, but it must find new ways to express itself for the future.

Thus, the question of congregational innovation comes into focus. How do we Christians innovate when our credibility depends on continuity with the past and honoring tradition? To put it another way, How do we maintain a rock-solid commitment to the unchanging Christian faith while at the same time finding innovative ways to express that faith in an ever-changing culture?

That takes us back to the image of recalibrating. But how do we recalibrate? We recalibrate according to a standard. If I want to reset my watch, I look up the time from a standard I trust (usually my cell phone). If I sing, I follow the beat of the musicians. If I plant crops, I wait for the proper season to harvest them. But Christian recalibrating is particularly tricky because we need to account for both the ever-changing culture and the never- changing gospel. We can do that using the dual standard of people and practices—that is, according to the longings and losses of the ever-changing people entrusted to our care and according to the practices that constitute the never-changing gospel. To do that, we must recalibrate our understanding of Christian leadership.

Excerpted from The Innovative Church by Scott Cormode, ©2020. Used by permission of Baker Publishing BakerPublishingGroup.com.