Home Resources Books From the Shadows to the Light 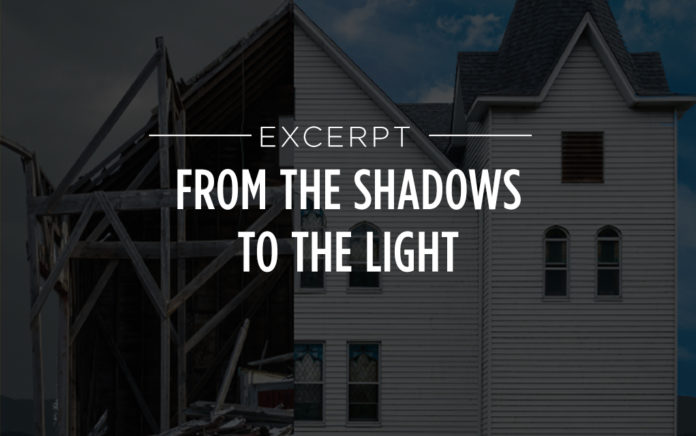 A way forward for people affected by Narcissism in the church

Excerpted From
When Narcissism Comes to the Church
By Chuck DeGroat

Narcissism in the public sphere can be dramatic and grand, a spectacle to behold, and even traumatic to experience. When we experience narcissism personally and relationally, the toxic effects are painful and crazy-making.

Perhaps he’s the church planter whose charm and sense of authority appears compelling but whose leadership style produces a relational debris field. Or the spouse whose controlling behavior makes you feel unsafe and crazy. Or the committee chairwoman whose team walks on eggshells. When narcissism invades the space of family, work, or church life, the impact is dramatic and traumatic. We need to talk.

But it’s not enough to look at narcissism through the lens of an egotistical political figure or an emotionally abusive spouse, an arrogant CEO, or a powerful religious figure. We swim in the cultural waters of narcissism, and churches are not immune. Western culture is a narcissistic culture. While we tell ourselves stories of American exceptionalism, we hide what’s beneath—fragmentation, systemic racism, ethnocentrism, misogyny, addiction, shame, and so much more. We’ve got a problem—all of us. It’s an us problem, not a them problem. I invite each of us to ask how we participate in narcissistic systems while providing clear resources for those traumatized by narcissistic relationships, particularly in the church.

Yes, narcissism makes us less human. Eventually the masks meant to protect ourselves and ease the ache of our longings become the only faces we know. The face of narcissism seems to work in Western culture, and sadly it’s a face that many churchgoers look to for spiritual inspiration and motivation.

I began studying narcissism in the late 1990s. We were not talking about narcissistic leadership in the church then, and sadly we’re still only on the cusp of that conversation now. I began studying it because I was seeing it in myself, in my classmates from seminary, and in my colleagues in ministry. Church planting was ramping up in my denomination at that time, and in the spirit of mission it seemed as if we were sweeping psychological health under the rug. I’ve experienced my own share of trauma under narcissistic leadership. It seemed then as if few had a category for narcissism’s uniquely diabolical complexion, and twenty years later the church is still tragically underinformed.

Understanding narcissism’s underbelly has been the most important revelation for my own work with pastors, ministry leaders, spouses and organizations. This revelation invites us to take narcissism with a deadly seriousness, but also to envision a compassionate path forward. As I learned—not just from the research but from the living experiences of women and men impacted by narcissism—I became convinced that narcissism was not only a growing reality but a misdiagnosed one, especially in churches. Indeed, within churches a narcissist might even be described as charismatic, gifted, confident, smart, strategic, agile, and compelling. He was selected to plant the church, to lead the ministry, to teach the class. He was quickly let off the hook when a spouse reported emotional abuse.

I saw also that it wasn’t easy to confront systemic narcissism in churches that are seen as successful, special, blessed, Spirit led, and anointed. Whole church systems and programs evolve within the waters of narcissism, and when it’s the water you swim in, it’s hard to see and even harder to confront.

Ministry leaders and churches today are obsessively preoccupied with their reputation, influence, success, rightness, progressiveness, relevance, platform, affirmation, and power. And research shows that narcissism is a growing phenomenon, particularly over the last fifty years.

Narcissism is real. And for this reason, I do not resist naming a person as a “narcissist”—not as the definitive label describing their true, ontological self, but as a description of a pattern of living and relating. The heart is prone to deceit (Jer. 17:9), and contemporary psychology has done us the service of naming our heart’s deceits as pathological patterns of relating, often born out of life’s brokenness and shame. As a mental health professional, I seek to use the term wisely and carefully. While mental health resources on the internet are helpful, they’ve also empowered us with a wide vocabulary and the power to place labels on friends, politicians, and people we’re curious about, with or without professional discernment.

So I encourage wisdom and patience with labels. Ultimately, a descriptor like “narcissist” names the persona, the mask, a part of someone, but like other descriptors (doctor, father, diabetic, autistic) it does not account for our core “true self” hidden with Christ in God. I hope my use of the words narcissist or narcissism shows both honesty and compassion.

My belief is that God desires truth in our inner being (Ps. 51:6) and that this truth has the power to transform our lives, our churches, our relationships, and our society. Dismantling the narcissistic false self is an act of dying—dying to illusion, to control and to fear. And it’s also an act of resurrection—to truth, to vulnerability, to creativity, and to connection. As we trust that Love desires the best for us, and not our downfall, perhaps we’ll all tire of the masks we wear and come out of hiding. May all of us committed to this work know the freedom that comes as we step out from shadows into the light.