Home Books Apologetics When the Church Is the Church 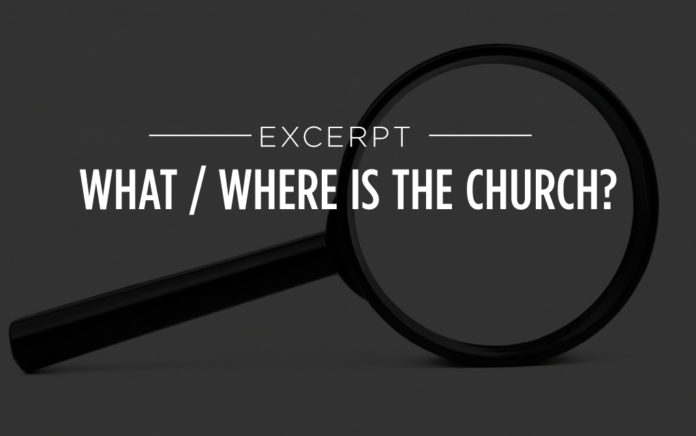 When do you have the church?

What is an authentic church community? I remember sitting in the boardroom of a prominent Christian business leader. They did a lot of “Christiany” things in this business. He told of the mission trips he had taken with his employees, the investments the company had made from its profits in select boutique ministry ventures, and the Bible study offered on campus for employees. I think I even remember the mention of a corporate chaplain. Then, at the end, he said he wasn’t personally involved in a local church because, after all, “We’re the church too. This company is the church.”

Inside I thought I was going to explode. Everything within me wanted to shout, “No, you are not! A company is not the body of Christ instituted as the hope of the world by Jesus himself, chronicled breathtakingly by Luke through the book of Acts, and shaped in thinking and practice by the apostle Paul through letter after letter now captured in the New Testament. A marketplace venture that offers itself on the New York Stock Exchange is not the entity that is so expansive with energy not even the gates of hell can withstand its onslaught. An assembly of employees in cubicles working for end-of-year stock options and bonuses is not the gathering of saints bristling with the power of spiritual gifts as they mobilize to provide justice for the oppressed, service to the widow and the orphan, and compassion for the poor.”

So when do you have the church?

From Outreach Magazine  The 3 Legal Purposes of a Minister

When you have that, it’s the most breathtakingly beautiful and powerful force on the planet.

Let me give you some pictures of this.

At a recent baptism service, a woman tweeted out a picture of her son being baptized. But it was what she tweeted along with it that stuck with me. She wrote how 10 years ago I baptized her and her husband and now we baptized their son. To that she added the hashtags #liveschanged #familieschanged.

Another picture of this.

Some are runaways, some are kidnapped, some are sold into it by their fathers. But they are just children—eight or nine, maybe 10 or 12 years old. They are taken, beaten, raped and then plied with drugs or alcohol until they become addicts. That way, they can be controlled and forced to service up to 20 customers a day.

One of the worst places in the world for this is the Philippines. Our church found out that organizations such as the International Justice Mission knew where these girls were, knew the dungeons below the brothels where they were kept, but couldn’t rescue them until there was a place where they could go. They have no homes, and many can’t return to their families because it was their fathers who sold them. They have addictions, psychological damage, need to be protected from their pimps while charges are brought, and need to be educated through all this. If you rescue and then just release, you are signing their death warrant. So, as horrific as it sounds, the girls are left in the brothels until there is not only a place to rescue them from, but to rescue them to. When we heard that, we said, “You just need a house? You’re just talking bricks and mortar? We’ll do that.” So we built that house. We helped staff it. And once we did, they started rescuing children.

When the church is being the church, it really is the hope of the world. And not even the gates of hell can stand up under its onslaught.