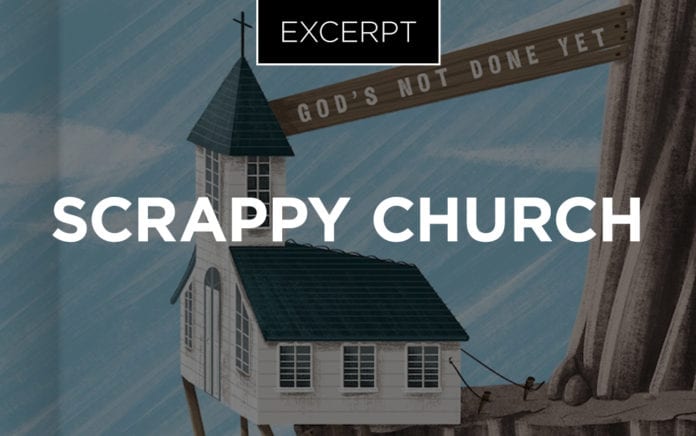 These are characteristics of churches that survive despite the odds.

At least two-thirds of churches are declining, maybe more. We estimate that about 100 to 150 churches are closing every week. The sighs of despair are justified.

Even among those churches that are hanging on, a number of their leaders feel a sense of futility. Though smaller churches vastly outnumber larger churches, more people are attending the larger churches every week. The migration from smaller to larger is clear and evident.

They see it. They sense it.  They know it.  Is there hope? Do these smaller churches have any path forward? Can the smaller and mid-sized church survive in the world seemingly dominated by larger churches and megachurches?

The answer to the question is an absolute “yes.” I make that declaration not by sentiment nor false hopes, but by clear evidence of God’s work. Though the number of scrappy churches is still relatively small, they are growing in number. I am convinced scrappy churches are a growing trend of the reality we will soon see.

So what are some of the characteristics we can already see in these scrappy churches? Let’s look at a few.

1. They Believe God Still Has a Plan for Them.

While scrappy church leaders are not blind to the difficulties around them and in their congregations, they remain certain God is still working in their churches. “We are at this address right now for a reason,” one pastor told us. “We are not here by accident. We are determined to make a difference in our community. We are moving forward.”

So does the church have challenges as they seek to move forward? The pastor responded with a loud laugh. “Of course we do. We have many of the same issues in our turnaround as we had in our decline. We still struggle for resources. We still have change-resistant members. We still have a lot of critics.”

He paused for a moment and reflected, “But, you know, many of us in the church have chosen to focus on what God wants us to do. We have to be obedient to the Great Commission and the Great Commandment. We can’t spend our time focusing on the critics and the naysayers. We have to focus on God’s plan for us.”

From Outreach Magazine  Prepping for a Virtual Short-Term Mission Trip

His concluding words were a common sentiment among the scrappy churches. “We believe with all our hearts that God still has a plan for our church.”

It is that dogged determination in God’s plan for the church that fuels them forward. They see their mission as God’s mission and, because it is truly his, they will not be deterred.

2. They Turn to Prayer for the Turnaround.

One of the common themes of the scrappy churches was a greater dependence on prayer for their churches. “We realized we had become comfortable in our own power,” said Margaret, a member of one of the scrappy churches that experienced a turnaround. “We began a time of intensive prayer for our church. It began with a twenty-four-hour prayer vigil, but it continued well beyond that. In fact, we are still praying for God to use our church in the community and beyond. It’s amazing what happens when you depend on him through prayer.”

Of course, it would be good if we could share with you exactly how these churches are moving forward in prayer. There is, however, no discernible pattern. The ways the churches have become focused on prayer for revitalization are as diverse as the churches themselves.

Though the methodologies are different, there is a theme of prayer in many of the scrappy churches. A number of the congregations focused on the role prayer played in the early church. In fact, this passage from Acts 2:42 is cited frequently in the scrappy churches: “They devoted themselves to the apostles’ teaching, to the fellowship, to the breaking of bread and to prayer.”

Prayer is not an afterthought in scrappy churches. It is pervasive and powerful.

3. They Celebrate the Presence of Other Churches.

“I used to get so angry every time a new church or new campus of a church located near us,” Harold admitted. Harold is a pastor of a turnaround church. “I would fuss to whomever would listen. We don’t need another church in this area!”

We also asked Harold what changed his attitude on this issue. He smiled, “My son. James is a pastor in Arizona. We stay in touch a lot. He heard my rants about the other churches for years. One Christmas, he and his family spent a week with us. He showed me the demographics near our church. And he showed about how much of our community is in church.”

What did the report show?

Harold sighed, “More than 80 percent of our community is not in church. Probably almost as many aren’t believers. James didn’t have to say another word. I felt ashamed. We don’t have too many churches. We don’t have enough churches reaching people. I let anger and jealousy rule me. And it affected my leadership of the church.”

“I wish I could say that I had a dramatic change,” Harold began. “But over time, God began to work on me about this issue. My hard heart began to melt. I now see other churches as our allies in the mission of the kingdom. They are not our competition. I really think my change of heart was key to our church turning around eventually.”