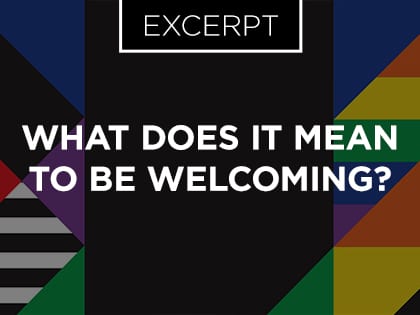 LGBT questions pose a difficult challenge for denominations and the churches who are a part of them.

Excerpted from
What Does It Mean to Be Welcoming?
By Travis Collins

Nevertheless, a number of local congregations and pastors have chosen to remain in their denominations despite differences with the majority. One argument given for remaining is that changes at the denominational level actually don’t change many things at the local level. Local folks argue, “Edicts and pronouncements originating from some meeting far away have little direct impact on us. We’re still going to be who we are.” Church members say, “We’re going to keep on doing church like we’ve always done it, no matter what declarations they make in the denominational offices.” (That’s a naïve assumption, by the way, and we’ll talk about that momentarily.) So they stay.

Others simply believe the mission they share with their denominational family trumps the beliefs they don’t. So they remain in the fold for the sake of educational institutions, justice initiatives and social ministries. They stay for the sake of missionaries across the globe whose support they share. Missional cooperation, for many, is simply a higher value than doctrinal conformity.

Another common reason for staying in a denomination is to remain a prophetic voice from within. People who have deep ties to a national body are often not content to write off that body. They become loyal dissenters. Often their opposition is gentle, well-reasoned and respectful, though sometimes their opposition is emotional and strident. (My hunch is some denominational leaders would breathe a sigh of relief if a few of their congregations would go ahead and withdraw.)

Some congregations, obviously, make the terribly difficult decision to leave their denominational family. Longstanding relationships are fractured. Facebook feuds abound. In some cases, arguments and lawsuits over who owns the buildings consume a painful amount of time and money.

So why would a church leave its denomination over the matter of sexuality? For many, this is a defining issue. This is not one of those marginal debates about which disagreement is justifiable. And for many, being labeled as either liberals or fundamentalists (depending on where they lie on their denomination’s spectrum) by their denominational partners has grown tiresome. Some people are weary, as a friend of mine put it, of having adversaries from within their denominations constantly “in their grill.” This fight has been exhausting for lots of people, and many feel the energy spent debating this topic would be better spent on evangelism and meeting human needs. So some have withdrawn from the fray.

Many also recognize that, while a denomination’s decision might not make an immediate difference in a local congregation, in time the impact inevitably will be felt. Such realities as the theological bent of ministers coming out of the denomination’s seminaries and the positions championed by denominational literature eventually do have an impact on local churches. Insightful people at the local church level understand that, although they do not feel an immediate impact from denominational decisions, down the road they likely will. The church will notice that pastors coming from the denomination’s seminaries have different theological views than previous graduates, and they will notice that the Sunday school and discipleship literature has a different slant than before. So, recognizing that changes at the denominational level eventually do trickle down to the local church level, congregations sometimes decide to leave.

It’s hard to imagine how negatively our constant dividing into smaller and smaller groups must be perceived by unchurched people. Yet, as with Paul and Barnabas, sometimes good people view things so differently that separation is the only viable option.