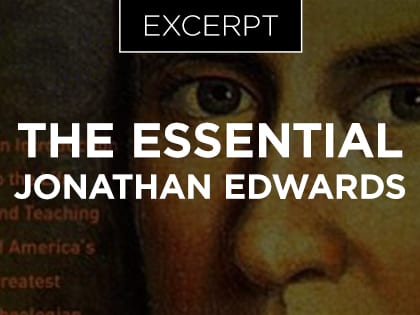 Jonathan Edwards believed that our theology, like the Bible, begins and ends with the beauty and excellency of God.

What is the starting point of Christian faith? When you wake up and begin your morning study of the Bible, what are you seeking to find out? Or, to go back in time a bit, why did you begin to study the Bible in the first place?

The starting point of religion or spirituality for many today is the individual and his or her subjective feelings. What do I want? What do I need, in a spiritual sense? How can religion, and whatever superpower lies behind it, serve me and meet my desires? In short, what can I get from this deal? Sadly, even Christians are not immune to these questions.

Though biblical spirituality certainly addresses and responds to the heart cries of lost sinners, its starting point is nothing other than the living God. From the awe-inspiring opening of Genesis 1:1—“In the beginning, God”—to the cataclysmic ending of Revelation 21:22—“in the city . . . is the Lord God the Almighty and the Lamb”—the Bible declares without interruption or apology that God is the starting and ending points of true religion. As portrayed in the Bible, God does not bow to man. Man, lost and helpless, bows to God.

Jonathan Edwards seized upon this central truth early in his life. When he was a young, budding scholar at Yale University, he suddenly discovered in his daily meditation on the Scripture “a sense of the glory of the divine being” that transformed his life (Works 16, 492). Reflecting later on this chrysalis moment, Edwards preached that with genuine faith “There is not only a speculatively judging that God is gracious, but a sense how amiable God is upon that account, or a sense of the beauty of this divine attribute” (Works 17, 413). When a sinner comes to understand the graciousness of God, and the majesty of his character, they see with piercing clarity that “There is a divine and superlative glory in these things; an excellency that is of a vastly higher kind, and more sublime nature than in other things; a glory greatly distinguishing them from all that is earthly and temporal” (Works 17, 413). In this chapter, we examine the center of Edwards’s theology, the Lord God, who formed the first link in a cycle of beauty that begins with creation and runs its course to heaven.

From Outreach Magazine  8 Time Drainers for Pastors and Staff

THE STARTING POINT OF THEOLOGY

When the young Yale tutor pushed past the muddle of everyday life and became aware of God’s ineffable character, it was as if scales fell from his eyes. The theater, the cosmic drama, of God’s reign over the world came into view, and Jonathan stood transfixed. He saw heaven and hell, man and Satan, in clearer view than ever before. But above all, Jonathan saw the Lord. He knew then that God was no abstract deity, but was a personal being whom all creation could not contain. In his sermon “God’s Excellencies,” preached in 1720, the same year of his spiritual breakthrough, Jonathan considered the qualities of God that robed Him in splendor. He prefaced his analysis with a warning of his unworthiness for the task:

“What poor, miserable creatures, then, are we, to talk of the infinite and transcendent gloriousness of the great, eternal, and almighty Jehovah; what miserable work do worms of the dust make, when they get upon such a theme as this, which the very angels do stammer at? But yet, although we are but worms and insects, less than insects, nothing at all, yea, less than nothing, yet so has God dignified us, that he has made [us] for this very end: to think and be astonished [at] his glorious perfections. And this is what we hope will be our business to all eternity; to think on, to delight [in], to speak of, and sing forth, the infinite excellencies of the Deity. He has made us capable of understanding so much of him here as is necessary in order to our acceptable worshipping and praising him, and he has instructed us, and taught us, as little ignorant babes and infants, and has helped our weak understanding by his instructions; he has told us what he is, has condescended to our poor capacities and described himself to us after the manner of men: as men, when they teach children, must teach them after their manner of thinking of things, and come down to their childish capacities, so has God taught us concerning himself.” (Works 10, 417–18)

The one who spoke of God, in Edwards’s mind, did so as a created, lowly being, a “worm of the dust.” This is a striking beginning for the study of God. One did not discuss the Lord as an abstract concept. One begins the study of theology lying in the dust beside the prophet Ezekiel, heart pounding, eyes straining to shut out the piercing glory of God (Ezek. 1:28–2:10).

From Outreach Magazine  Dissecting The Roman Culture Jesus Came Into

Beginning his study of God with the Word of God, Edwards, like Ezekiel, raised himself from the ground and began to speak of what he saw. God’s beauty had numerous facets and required all of man’s senses to comprehend it. Edwards identified seven attributes that demonstrated God’s excellency, or beauty. Edwards’s descriptions of these are worth quoting at length. One should ponder them slowly and meditatively, for they provide rich food for one’s spiritual nourishment.

Excerpted from The Essential Jonathan Edwards: An Introduction to the Life and Teaching of American’s Greatest Theologian by Owen Strachan and Douglas Allen Sweeney (©2018). Published by Moody Publishers. Used by permission.