Home Resources Books The Church Is Small—So What? 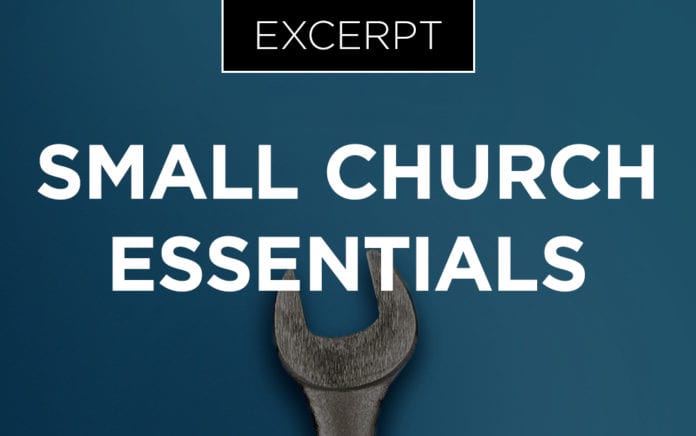 EMBRACING THE SMALL CHURCH WITHOUT SETTLING

Several years ago at my church’s annual denominational conference, I was listening to the leader give his state of the denomination talk. As part of his assessment, he cited statistics that I had heard many times before. I’ve come to learn they are surprisingly universal across denominational lines and geo-graphical regions.

He continued to speak, but my mind drifted as questions surfaced: What if that’s not a problem? What if when Jesus said “I will build my church” what he had in mind wasn’t a bunch of pastors wringing their hands because their congregation isn’t as big as someone else’s congregation? What if Jesus’ idea was for churches of all sizes to work together, with mega, big, small and house churches each contributing something special to the whole?

What if by trying to fix a problem that isn’t a problem, we’re actually working against a strategy that God wants us to enact? A strategy that sees our small churches as a vital tool to be used, not a problem to be fixed?

Instead, in the last generation or two, we’ve made big and megachurches the standard, one that most churches will never reach and one, I believe, many of us aren’t supposed to, because we’re called to small.

Jesus has been building his church for 2,000 years using all kinds of people, all types of methods, all styles and sizes of churches.

Too many small churches and their pastors are laboring under a false impression—a lie, really—that their church can’t be great until it becomes bigger.

We need to put that lie to rest, starting in the heart and ministry of every pastor of every small church.

A LOT OF CHURCHES ARE SMALL—SO WHAT?

Since the church I pastored (and still pastor) was well under 250 when I heard the message of that denominational leader, I knew the expected response to the statistic should be “Our church is small too. Oh no!” But something inside me broke that day. Instead I thought “So what?!” So what if our church is small? So what if we’re one of my denomination’s 90 percent? So what if half the people in our denomination are attending small congregations instead of big ones? If they’re doing good, outreaching, Jesus-honoring, kingdom work, so what if they’re small?

As I’ve come to learn since then, the percentage of small to large churches says absolutely nothing about the spiritual temperature of the churches in any denomination or geographical region. If a group of churches are in a state of growth and impact, it will include the planting of new churches that are almost all going to be small. So, when the spiritual health of a region or denomination is growing, there are more small churches popping up, keeping the percentage of small churches high.

On the other hand, if a group of churches are in an unhealthy state, the existing churches will be declining in size, so the number of small churches increases that way. Either way, whether we’re doing well or doing poorly, there will always be a lot of small churches. We need new ways to look at church health and growth—ways that include, but are not limited to, numerical, people-in-the-seats growth; ways that measure health, vitality, outreach and more.

From Outreach Magazine  The Agile Church

For months after that denominational conference, the question “our church is small, so what?” kept nagging me. I knew that moving from “oh no!” to “so what?” was just a first step to an important, perhaps life- and ministry-altering destination.

“So what?” is not an answer. Alone it’s a rebellious spitball from the back of the class. If it doesn’t lead somewhere better, it’s an annoyance at best, cynicism at worst.

Then, one day, something shifted. We were working on an upcoming event dealing with all the small church issues of trying to do more with less, when it hit me.

Those mental, emotional, and spiritual leaps from “oh no!” to “so what?” to “now what?” became the starter steps of one the hardest, but most important journeys of my life. They can be for you too.

Pause right now and ask yourself that question: “Our church is small, now what?”

How would your ministry, your church, your life change if you could jump from “oh no!” to “now what?”

Taken from Small Church Essentials: Field-Tested Principles for Leading a Healthy Congregation of Under 250 by Karl Vaters (©2018). Published by Moody Publishers. Used by permission.