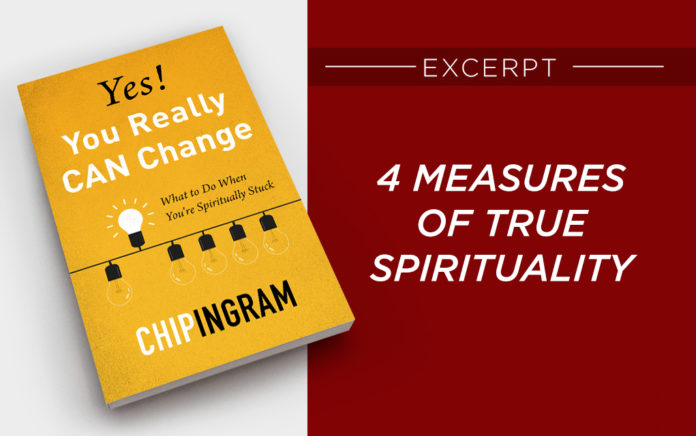 Excerpted from ‘Yes! You Really CAN Change’ (Moody)

Excerpted From
Yes! You Really CAN Change
By Chip Ingram

I didn’t know much about the Christian life in my first few months as a believer. The bricklayer who took me under his wing met with me weekly to teach me how to walk with Jesus. Dave was a low-key, low-pressure, genuinely loving guy. I saw how he interacted with his wife and their four children, living out their relationship in Christ as a couple and family. They weren’t perfect, but they modeled a marriage that I wanted to have someday.

Dave taught me to read and study the Bible. He helped me memorize two or three verses a week and introduced me to some classic Christian books. Under his guidance, I learned how to verbalize my faith. I watched him interact with other men across the social spectrum at a Bible study and witnessed their genuine faith and love for one another.

I never enjoyed church much as I was growing up, but now I was eager to get up on Sunday mornings and attend worship. My outward behavior began to change. People told me what a wonderful Christian I was because I was doing all the right activities. They didn’t know about all my internal struggles with lust, envy, anger, and coveting, but I looked pretty good on the outside. And I feel into a spiritual trap that almost ruined my relationship with Christ.

What you don’t know about transformation can hurt you. All the things we do as part of the spiritual growth process—reading the Bible, prayer, church attendance, small group studies, and so on—are important. Cleaning up outward expressions like profanity and anger outbursts is helpful. But many people will assume that parallel changes are going on internally. As we’ve seen, transformation is much more than eliminating old activities and taking up new ones. We can sometimes make these outward changes ends in themselves. We call that “legalism”—settling for an appearance of righteousness while our souls are a mass of sinful contradictions. Jesus had harsh words for self-righteous people who fit that description. Their hearts were far from God.

I immersed myself in Bible study and Scripture memory over the next two years. I wanted to become the ideal Christian, and plenty of people were encouraging me about how on-fire and deeply spiritual I had become. But beneath the surface, I still had layers of self-righteousness and guilt for not measuring up. I’d beat myself up for missing a quiet time. My prayers turned into lists of needs and requests, and I had to recite them completely before I went to bed. I didn’t want to miss church, partly because I felt the need to be noticed there. I became very judgmental of other Christians who were doing less, giving less, and sharing their faith less than I was. My early joy and love for Christ morphed into self-righteous zeal.

Many Christians are living that way today—not intentionally, and unaware of their self-righteousness, but nevertheless filled with a sense of religious duty without much delight in the Lord. They may complain of near exhaustion in their ministry efforts, but they don’t exhibit much love or joy. That’s what I had become—a joyless, dutiful Christian.

Walking across campus one day, I ran into a girl who had been a friend for three years. She had seen the changes in my life from my earliest days as a Christian to the person I had become. We stopped to talk, and after exchanging greetings, she caught me off guard with her next words.

“Chip, I remember when you were a really neat guy. When I first met you, you had a contagious joy, and you treated people like they really mattered. You were fun to be around. In fact, you were the first Christian I ever met who I wanted to be like.”

I could sense a “but” coming, and I was right.

“But that’s not you anymore. No matter what people say, you always quote a Bible verse. There’s an air about you that makes me feel guilty and bad—like I don’t measure up—to you or to God. I don’t know what happened to you, but I sure don’t like it.”

I didn’t know what to say, and she didn’t expect a response. But she said one more thing before she turned away and left me standing in the autumn sunlight alone. “If this is what it means to be a committed Christian, I don’t know that I would ever want to be one.”

That caring, non-Christian friend might as well have been an angel. She didn’t feel like one at the time—our “chance” encounter seemed like a gut-punch from God designed to maximize the damage to my ego. But her words were a truthful mirror when I desperately needed one.

I didn’t surrender to that truth right away. I immediately began to rationalize her words as unfair, perhaps even jealous, or at least the view of an outsider who just didn’t understand. But I couldn’t dismiss what she said. Her honesty cut through my defenses. Once I really thought about it, I had to admit she was right. I wasn’t very joyful or loving. Under the light of that truth, I began to see all my vain, guilty efforts to gain acceptance from God and fellow Christians through my performance. I had substituted cheap approval for God’s genuine love.

The goal of being a new creation is to be transformed from the inside out. The whole point of being a Christian isn’t to act like one. It’s to be one. We aren’t supposed to love because we are told to. We are supposed to love because we are loving. Otherwise, we’re like a cat trying to act like a dog by barking or a caterpillar trying to fly before having wings. If we find ourselves constantly trying to act against our nature in a certain area, we have not been transformed in that area yet. There is still a gap between the dilapidated house and the new blueprint, between the toddler and the adult. We may be obedient to God in that area—it’s better to live obediently than to revert to natural impulses – but the goal is to be transformed so we can live from the new nature we’ve been given. We have to get to the point where we love, demonstrate patience, give generously, and so on, not because we are supposed to but because it’s who we are.

Many people are turned off from Christianity because they’ve only seen unchanged people trying to act like Christians. They haven’t seen many examples of genuine, New Testament transformation. And, to be honest, we may see evidence of both kinds of Christians within us. How can you know whether you are spiritually changing or just going through the motions? When is your behavior the result of religious rules instead of authentic change? How can you tell the difference? Can you really know if you’re on the right track?

From Outreach Magazine  Church Growth in the Year of COVID

If you’re being transformed as a new creation into the likeness of Christ, there will be evidence, and much of it is internal. God doesn’t leave us in the dark about these things. If He has provided a structure for transformation—leaders equipping, members ministering, and everyone growing together into the likeness of Jesus—He surely wants you to know if you’re growing into maturity. Paul addresses this very issue in the next three verses of Ephesians 4.

“Then we will no longer be infants, tossed back and forth by the waves, and blown here and there by every wind of teaching and by the cunning and craftiness of people in their deceitful scheming. Instead, speaking the truth in love, we will grow to become in every respect the mature body of him who is the head, that is, Christ. From him the whole body, joined and held together by every supporting ligament, grows and builds itself up in love, as each part does its work.” —Ephesians 4:14–16

This is not just a theoretical or conceptual picture. This model of growth into spiritual maturity produces four discernible results. As you transform into the likeness of Christ, you will be able to see at least these four characteristics at work in your life:

1. You can handle Scripture well enough to spot false teachers and trendy religious fads. You maintain doctrinal stability in the face of both.

2. You speak the truth in love. Your commitment to relationships allows you to say hard things but in a loving way.

3. You fit into the body of Christ with a purpose only you can fulfill. You participate fully, know your gifts, function in those gifts, and bear spiritual fruit.

4. Your love for God and others is expanding. When someone asks how you’re doing spiritually, your acid test is not the activities you’re doing (or not) but the love you have. God measures your spiritual progress by two criteria: whether you are (1) loving God more deeply and (2) loving others more authentically.

Those are four timeless keys to becoming the person you long to be, and they outline God’s plan to create an environment in which people grow. If you are part of a local church that practices the four truths that flow out of this passage, you will find authentic transformation occurring in your life. If you begin reacting and responding to people in ways that reflect these principles, you can know God is doing a supernatural work within you.

Excerpted from Yes! You Really CAN Change: What to Do When You’re Spiritually Stuck by Chip Ingram (© 2021). Published by Moody Publishers. Used by permission. 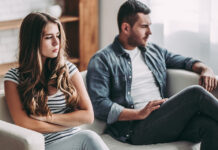 5 Ways the Enemy Worms His Way Into Your Marriage