Home Books Christian Living Transformation! The Heart of the Matter

Robert L. Saucy: "The heart, above all, is designed to seek wisdom and knowledge by hearing God’s Word."

To know something can, in some instances in Scripture, mean nothing more than possessing objective information about what is known. But the most significant use of “know” refers to knowledge derived from a personal encounter with the object, so what is known is actually experienced by the knower.

As Johannes Pedersen explained, it is a knowledge that engages the whole person.

For the Israelite, thinking was not the solving of abstract problems. He does not add link to link, nor does he set up major and minor premises from which conclusions are drawn. To him thinking is to grasp a totality. He directs his heart towards the principal matter, that which determines the totality, and receives it into his heart, the heart thus being immediately stirred and led in a certain direction.

The fact that thinking stirs the heart and leads it in a certain direction shows clearly that such thinking is not just an intellectual affair; it also involves emotions and will.

An interesting example of knowledge involving the will or actual behavior is seen in Isaiah’s rebuke of the people of Israel: “An ox knows its owner, and a donkey its master’s manger, but Israel does not know, my people do not understand” (Isa. 1:3; cf. Hos. 4:1-2; Jer. 4:22). In the ancient New East, the ox and donkey were not considered very intelligent. Nevertheless, the prophet says that these animals had better knowledge than God’s people because they knew to whom they belonged and who it was that put food in their manger, and they responded accordingly. In comparison, God’s people lacked knowledge—“not theoretical ignorance, but rather failure to practice the filial relationship in which they stand with God.”

Jeremiah’s scathing denunciation of Judah’s king Jehoiakim is another example of knowledge including action. Pointing to Jehoiakim’s godly father, Josiah, Jeremiah says, “Did not your father eat and drink and do justice and righteousness? … He pled the cause of the afflicted and needy; … Is not that what it means to know me?” (Jer. 22:15-16). Knowing God, according to the prophet, includes doing justice and righteousness—in other words, appropriate action. Without action, one does not have knowledge. It’s significant that all of the Hebrew words most commonly used for thinking include the idea of the movement of the heart toward activity.

Emotion is also included in this experiential knowing. Expressing his delight for the Word of God, the psalmist exclaimed: “O how I love your law! It is my meditation all the day” (Ps. 119: 97). Your words are “sweet to my taste! Yes, sweeter than honey to my mouth” (v. 103). The emotion entailed in these last words is captured in Peterson’s paraphrase: “Your words are so choice, so tasty; I prefer them to the best home cooking” (msg). From his meditation on these words and the emotion which it included, the psalmist added, “I get understanding” and “have more insight than all my teachers” (vv. 104, 99).

Taken all together this testimony of the psalmist makes it clear that his understanding or knowledge involved an encounter with the Scripture that was more than intellectual. He knew with his total person—his mind, emotion and willing commitment. The same portrait of total personality comes into view when Scripture tells us that “Adam knew Eve his wife, and she conceived and bore Cain” (Gen. 4:1).

The recognition of this essential unity of thought, emotion and will in knowledge is critical when we consider our spiritual transformation. It is this kind of knowing that Scripture is talking about when it speaks of our knowledge of God and his knowledge of us. When Jesus said that he knows his sheep (John 10:27), but doesn’t know those who were counterfeit disciples (Matt. 7:21-22), he is obviously not referring simply to an intellectual or cognitive knowledge. For on that level he knows both groups. In both instances he is talking about a holistic kind of knowledge that involves an experiential relationship.

Our relationship with God is expressed by Paul as a mutual knowing: “But now that you have come to know God, or rather to be known by God” (Gal. 4:9; cf. Ps. 1:6). We know God and he knows us. In both instances it is an experiential knowledge that involves the whole person: thought, emotion and action. It is knowing by the person, which means knowing from the heart where all functions of personality reside in union.

This is why eternal life can be described as knowing God through his Son Jesus Christ (John 17:3). This meaning of the word “know” also explains our Lord’s promise, “you will know the truth and the truth will make you free” (John 8:32). We often “know” the truth, but don’t experience the freedom that God offers us. In reality we don’t know the truth deep in our heart, where it is known not only intellectually, but also emotionally and behaviorally—where it will affect the experiential issues of our life.

Scriptural hearing in its full sense also includes the whole person. There are instances where hear denotes simply an auditory-cognitive activity—one simply hears words that convey meaning. But the most significant meaning of hearing in Scripture, especially in our relationship with God, like knowing, embraces much more of our person than simply the mind.

When God says to his people, “Hear, O Israel!” he is obviously asking for more than careful listening in the sense of cognitive understanding. Like a parent telling his child, “You better listen to me,” God is exhorting his people to a hearing or “listening” that includes willful obedience. The same idea is in his words to the disciples on the Mount of Transfiguration: “This is my beloved Son . . . listen to him” (Matt. 17:5). Failure to hear is rebellion (Deut. 1:43).

Thus the caution of Jesus, “So take care how you listen” (Luke 8:18), is echoed throughout Scripture. The religion of the Scripture, as has been noted, is not so much one of seeing God, but of hearing his Word, which calls for obedience. “It is a religion of action” demanding a response from the whole person.

One does not really hear something unless it is heard with the heart, where thought, emotion and will are inseparably united.

The concept of love provides the clearest example of the unity of a human being’s activities. Contrary to our culture, which tends to associate love with feelings, biblical love entails all of the functions of the heart. “I have loved you with an everlasting love,” God told his people, “therefore I have drawn you with loving kindness” (Jer. 31:3).

The nature of God’s love—and all genuine biblical love—is set forth in the words of the apostle John: “This is love: not that we loved God, but that he loved us and sent his Son as an atoning sacrifice for our sins” (1 John 4:10 NIV). Love is exhibited in God’s act of giving the gift of his Son for our salvation.

As his love for us entails thought, emotion and action, so also does our love for him and others: “But whoever has the world’s goods, and sees his brother in need and closes his heart against him, how does the love of God abide in him? Little children, let us not love with word or with tongue, but in deed and truth” (1 John 3:17-18; cf. Deut. 11:22; 30:20).

As persons created in the image of God who is love, we were created to love. Human living is in a very real sense summed up in the two great commandments—love of God and love of our neighbor (Matt. 22:36-40).

It is not our reason or emotion or volition that defines our personhood. Ultimately, it is our love, and love entails all three of these capacities in an inseparable unity—in the person of the heart. 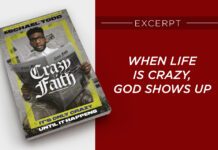 When Life Is Crazy, God Shows Up