Home Books Christian Living Transformation! The Heart of the Matter

Robert L. Saucy: "The heart, above all, is designed to seek wisdom and knowledge by hearing God’s Word."

The Dangers of Living Detached From Our Heart

Unfortunately, there is a natural tendency in all of us to avoid the things in our heart that are difficult to face. These can include the pain of grief and loss or of other traumatic experiences such as horrible accidents or the violence of battle experienced by many in war.

But even more directly related to the issue of spiritual growth, we tend to suppress the gnawing pangs of conscience and the voice of God’s Spirit through his Word when he reminds us that we are not living the way we know we should.

Our reluctance to deal with the real state of our heart is forcefully expressed by another Puritan preacher, Richard Sibbes:

It were an easy thing to be a Christian, if religion stood only in a few outward works and duties, but to take the soul to task, and to deal roundly with our own hearts, and to let conscience have its full work, and to bring the soul unto God, this is not so easy a matter, because the soul out of self-love is loath to enter into itself, lest it should have other thoughts of itself than it would have.

The person who refuses to live in openness to the heart, however, lives a life that is disconnected from his heart. As long as he or she remains that way, there is no hope for change.

This disconnectedness can occur in various ways, no doubt related to our individual personality and the particular nature of the problem. We can become estranged from our heart by a sort of “willfulness” in which we simply override the heart. Rather than dealing with the dysfunction in our heart, we simply exert our willpower in determination to stop our wrongful behavior and be “good.” In our attempt to attain and sustain a good outward behavior, we compulsively focus on a list of “dos and don’ts” much like the Pharisees in Jesus’ time.

If our will is strong enough, we may produce a rather respectable behavior, even a semblance of piety. At this point, however, our will is no longer the expression of the whole person of the heart. It has become a sort of detached power that we assert to force an outward order of life without dealing with the underlying disorder in the heart.

From Outreach Magazine  The Here and Now

The apostle Paul describes this sort of life as having “the appearance of wisdom in self-made religion and self-abasement … , but … of no value against fleshly indulgence” (Col. 2:23). One remains like the Pharisees whom Jesus described as whitewashed graves—the outside looks in good shape, but inside the heart is putrid.

Life in this state is a rigid, compulsive, legalistic existence—anything but life flowing naturally from the heart. It may gain respect from others and even pride to the performer, but it is incapable of producing genuine joy and peace within the heart. Moreover, when there is a disconnect between our conscious outward life and our heart through this sort of willfulness, we are cut off from the possibility of transformation. Following the thought of Martin Buber that nothing hides the face of God more than religion, Cornelius Plantinga warns, “When we are most religious, we may be most at risk of losing touch with God.”

Tired of trying to live up to one’s own high standards or those imposed by others, and feeling overwhelmed with guilt, we can abdicate responsibility for personal change and simply float along with the crowd, viewing ourselves as victims of circumstances beyond our control.

This abandonment of responsibility may seem passive at times, but it can also take a more active form of rebellion against the standards of one’s ideal. Scripture doesn’t give us the inner thoughts of the prodigal son who left his father and elder brother to squander his estate in “loose living” (Luke 15:11-32), but his story suggests that this may have been what was going on with him. The ideal of life set before him by his loving father and his apparently pharisaically “obedient” elder brother placed him under constant pressure to conform. Finding this burden too onerous, he responds by leaving home and plunging into a life of unrestrained sensuality.

The experience of the 19th-century Irish playwright Oscar Wilde—one of the greatest celebrities of his day and known for his sexual deviancy—may not have been as consciously deliberate as the prodigal son, but his lament in a letter written from prison to his friend Lord Alfred Douglas, who led him down the path of perversion, illustrates the same absence of will.

I must say that neither you nor your father, multiplied a thousand times over, could possibly have ruined a man like me: that I ruined myself: and nobody, great or small, can be ruined except by his own hand. … I let myself be lured into long spells of senseless and sensual ease. … I ceased to be lord over myself. I was no longer the captain of my soul, and did not know it. I allowed pleasure to dominate me . … I ended in horrible disgrace.

Whether someone passively surrenders to the tide of the crowd (though it’s still an active willingness to do so) or, like the prodigal son and Wilde, actively defies moral restraints, the will-less person lacks the determination to do the right thing. Such people simply give themselves over to sin as instruments of unrighteousness (Rom. 6:13). By not attempting to live in integrity with the moral law of their heart, they cut themselves off from their heart in their own way—even as strong, willful people do in their heart.

These two ways of cutting off oneself from his or her own heart are summed up well in Timothy Keller’s description of the two forms of prideful sin: “One form is being very bad and breaking all the rules, and the other form is being very good and keeping all the rules and becoming self-righteous.” In both instances, rather than face the truth of their heart and humbly look to God’s forgiveness and transforming grace to change, the person pridefully chooses to live his own way. 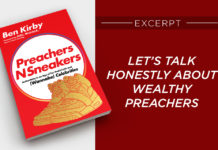