Home Resources Books Can I Trust God Even When It Hurts? 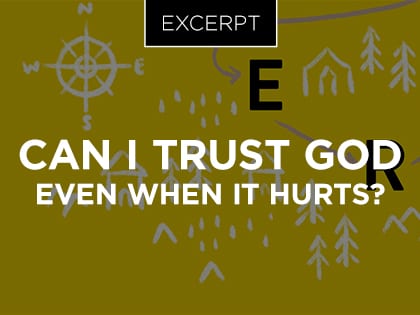 I often thought of pilgrimage in abstract, idealized terms until I went through a season of suffering.

Excerpted from
Born to Wander
By Michelle Van Loon

“I think I’m about to lose my job,” my husband said. During his long career in Information Technology, Bill had worked for both large multinational corporations and small businesses. He’d faced possible layoffs before but had always survived the cuts.

March 2017 was different. The day after he predicted he was about to be laid off, he walked in the door midday with his jacket slung over his arm, carrying a small box of his office bric-a-brac.

We were a couple of weeks into his search for a new position when I noticed a strange swelling in a lymph node under one arm. I knew I was at higher risk for breast cancer than the average woman as I’m an Ashkenazi Jew (there’s a strong genetic link in my population), my mom died of breast cancer, and I was diagnosed a couple of years ago with a rare immune system deficiency, which affects my ability to fight off infections and cancers.

I went for a mammogram, which led to a sonogram because the radiologist saw something suspicious on the results. The diagnostic tests produced more murky outcomes, and doctors called for a biopsy to be scheduled. Being ever the optimist, I was well into the process of planning my funeral service as the procedure was taking place when I heard the physician say one of the most beautiful sentences in the English language: “It’s benign.”

The relief and gratitude carried me for a few days, but quickly eroded as we assessed our housing situation. We were living in a rental house that had been plagued with an infestation of black mold and had serious electrical and plumbing problems, having lost the home we once owned in the wake of the 2007–08 housing market collapse. The cost of housing in our area was quite pricey. We faced yet another move in our long life together of moving to new places, this time to somewhere cheaper, but who would rent to us without a steady income source?

As if on cue, a beloved prodigal family member who’d been a source of great sorrow and much prayer over the years called us asking for money. Though we wouldn’t have chosen to assist with this situation even if we had the funds, the heartbreaking phone calls further amplified our dizzying state of affairs.

Sometimes, our bodies narrate what is happening in our souls. Not long after that difficult phone call, I stepped outside on the rain-slicked, mossy deck of our rental home, slipped and heard the sickening pop of my knee dislocating and the crunch of bones breaking in both knee and tailbone. Surgery to repair the knee was followed by serious complications. Healing has been slow and painful.

If I were secretly harboring any Instagram-worthy images of pilgrimage before this, these difficult months have exorcised them from my imagination. Instead, the three strands that have defined the notion of pilgrimage for generations of believers—moral, physical and interior journeys toward union with the Lord—have for me become a single braided cord through which I understand who I truly am as I limp through this series of trials. Can I trust him even when I don’t understand why these things are happening? Will I follow him even though it hurts? And do I have eyes to see his perfect care and abundant provision for me through it all?

Each of the three pilgrimage themes runs through Scripture from beginning to end. For instance, I see moral pilgrimage highlighted when God gave the Law to Moses in the Sinai and when Ezra read the Law aloud to the community as they were rebuilding Jerusalem. I hear it in the words of Jesus as He showed and told his followers that their righteousness must exceed that of the Pharisees (Matt. 5:20).

Physical pilgrimage imprinted the chosen people from the time of the Exodus and became a part of their yearly experience as they gathered in Jerusalem at the temple for Passover, Shavuot and Sukkot each year. And Jesus’ journey to the cross embodied physical pilgrimage for all of us.

The interior pilgrimage is highlighted in the flesh-and-blood portraits throughout Scripture of humans in relationship with God. My favorite example is the unvarnished story of the shepherd boy anointed to be king of Israel, David. The Bible shows us both his deep desire for God and the ways in which David wandered from him. We see in his story the innocence of a youngest son, singing to God in pure joy as he tended his father’s flocks; a young man on the run, clinging to the One who was guiding his journey away from his enemy; and the adult cries of a man confessing his sin to his Maker and Redeemer (Pss. 32, 51, 86, 122).

This recent collection of challenges in my life has underscored just how flimsy the usual markers of identity can be. We Westerners are in the habit of understanding our identity by our roles and relationships in this world. Typically, we define ourselves by the way we answer questions like: What do you do for work? Where do you live? Are you married? Do you have children? Where did you go to school?

A pilgrim is formed by the question “Do I trust him?”

Excerpted from Born to Wander: Recovering the Value of Our Pilgrim Identity by Michelle Van Loon (©2018). Published by Moody Publishers. Used by permission.