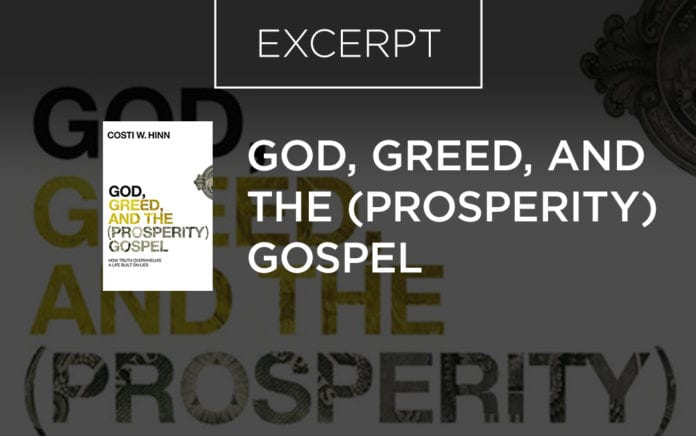 As I studied the Bible and church history, I discovered a long line of spiritual heroes with whom I felt an incredible kinship.

Excerpted From
God, Greed, and the (Prosperity) Gospel
By Costi Hinn

As my theological understanding changed, so did my heroes in the faith. I turned to the Bible and studied the trustworthy leaders who stood tall in the New Testament. Peter and the disciples left everything to follow Jesus (Matt. 19:27), and Stephen was martyred for his bold preaching of the truth (Acts 7:54–60). Jude contended for the faith no matter the cost (Jude 3). Paul was beaten and imprisoned for the sake of the gospel, and was never one to mince words when it came to false teachers (Gal. 1:8–9). As my study deepened, it became painfully clear that the Hinn style of ministry was nothing like the real gospel ministry described in Scripture. We resembled the greedy magicians and imposters that the Bible repeatedly calls out (Acts 8:9–21; 2 Peter 2:1–3). It was one truth-punch to the gut after another, but I’d never felt better.

Beyond biblical history, church history painted a grim picture of the type of people who preached poisonous doctrines in the church and abused power to get rich. The Reformation changed the course of the church forever when men grew tired of the exploitation of the poor and the selling of papal indulgences by the Catholic Church, along with heretical teaching that was polluting faith and worship. Martin Luther stood against the false teachings of the Catholic Church, and many others paid a heavy price for being faithful. There was no arguing with history. God had never taken kindly to prosperity gospel pundits or power hungry abusers. He cleaned house every time. Faithfulness was not getting rich by teaching people to give you all their money. Faithfulness was glorifying God, obeying him, and loving him above all and your neighbor as yourself. Faithfulness for a pastor meant giving your life to serve the church, not having the church serve you.

Soon, I found inspiration in the heroism of William Tyndale, who was strangled, then burned at the stake by the king of England, but not before providing the world with the best English Bible translation it had ever had. Even at the stake, his final words were said to be, “Lord! Open the king of England’s eyes.” That kind of passion for truth paired with a passion for lives to be changed stirred my soul in a way I had never experienced before.

Missionaries like Hudson Taylor, who spent more than 50 years serving China for the sake of the gospel, were nothing like the prosperity gospel heroes I once revered. Charles Spurgeon preached his guts out in the 19th century and was a staunch defender of the faith. He became incredibly famous but never once used the gospel as a means to a life of luxurious ease. Instead, he used his notoriety to put the gospel front and center and channeled his storehouse of resources into gospel advancement projects. Another giant in the faith, J.C. Ryle, cautioned churches long ago about the likes of Benny Hinn and those whose false doctrines were subtly camouflaged by layers of truth: “Now this ‘subtlety,’ St. Paul tells us, is precisely what we have to fear in false doctrine. We are not to expect it to approach our minds in the garment of error, but in the form of truth. Bad coin would never obtain currency if it had not some likeness to good. The wolf would seldom get into the fold if he did not enter it in sheep’s clothing. … Satan is far too wise a general to manage a campaign in such a fashion as this.”

Modern-day theologians and legends of the Christian faith—both still alive and recently passed—also played a critical role in my growth and understanding.

R.C. Sproul, Martyn Lloyd-Jones, Millard Erickson, W.A. Criswell, Norman Geisler, John Walvoord, F.F. Bruce, and numerous other faithful teachers line my bookshelves, their works pointing to Scripture on nearly every topic a Christian would need for a doctrinal overhaul. Beyond that, I enrolled in seminary and started studying biblical Greek at Talbot School of Theology before transferring to Midwestern Baptist Theological Seminary.

From Outreach Magazine  Good News for the Poor

The facts were the facts. Everything that biblical history, church history and modern-day faithful preachers described about false teachers and greedy church abusers fit our profile to a tee. Though many of my heroes were dead preachers, I suddenly felt like I had found long-lost family members and friends in the faith I wished I could meet. Their example of humility, faithfulness and fierce devotion to the truth was enough to push me into action. Most of all, the Jesus Christ of the Scriptures was my Savior and Lord. That was all the motivation I needed to move forward. I wanted to be a real pastor, shepherding the flock in faithfulness and not for selfish gain. I wanted to be a bold servant of Christ, the kind who preached the truth and called out error no matter the cost to protect people for the glory of God.